When I finally awakened from my post-Christmas caroling coma… I wanted to go right back to sleep. But no! I had a set amount of time in Lebanon, and I had to make the most of it. By the time I managed to pull myself together, Maria was home from church with plans for us to check a few more things off our sightseeing list.

We hopped on the bus and went all the way to the western waterfront of the city where Badveli was waiting to meet us. Our first stop was the famous “Pigeon Rocks.” There isn’t too much to say about these… They’re a couple of big rock formations out in the water. They are definitely cool looking! And it was nice to be by the water. They probably look even cooler during the sunset, but we were there earlier in the day and saw the awesome sunset from elsewhere along the coast. 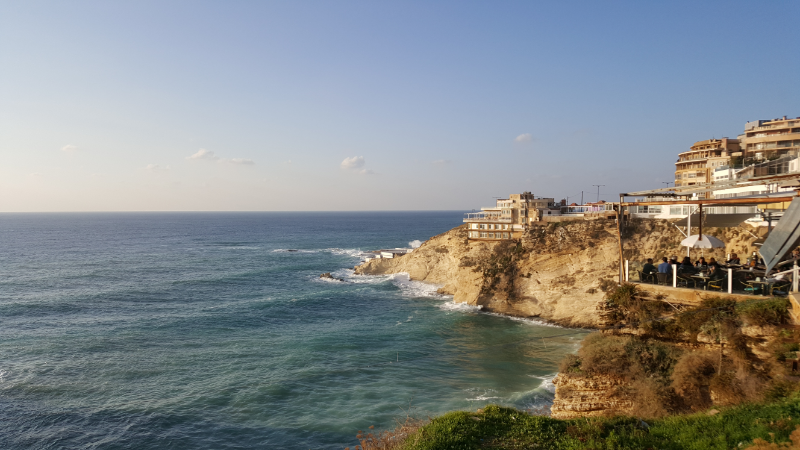 Apparently, people sometimes try to go through the hole in the big rock in boats. Like… come on. After watching the waves crash against the rocks and the water rush through the hole for about five seconds, I was convinced that that’s a terrible idea. I’m all about adventure and taking risks or whatever, but not when they’re stupid. Sorry, that was strongly worded and full of judgement. Let’s try again… As fun as it sounds to attempt to launch myself through a rocky hole in a little boat while waves try to smash me into tiny pieces, I think I’ll pass. (I don’t think that was any less judge-y… oh well, I tried.)

From there, we walked north and went for a nice stroll along the water. The weather, finally after three days of constant rain, was perfect. There’s nothing like the feeling of the sun warming your face, and the smell of the air reminded me of the beach back home. It was a snapshot of summer in the middle of winter, and what’s better than that? I’m sure it gets miserably hot during the summer months, but I was happy to enjoy the warmth while it was juuust right.

Our next stop was Luna Park, an amusement park right on the coast. Luna Park isn’t any sort of special name for that particular spot. More like it’s the generic name for “amusement park”. Fun fact: there are a ton of “Luna Parks” in existence. The name originally comes from Luna Park on Coney Island in New York, and it was borrowed by a few other developers who built amusement parks across the world. Now, in more countries than just Lebanon, saying “Luna Park” is the same as saying “amusement park”.

I wanted to go on the ferris wheel, something Badveli and Maria had never done before, probably because it’s another one of those “this ferris wheel has been here since before the beginning of time” situations.  But you know, remember how I was talking about risks and how some are worth taking? Terrifyingly old ferris wheels are almost ALWAYS worth it.

Since this isn’t exactly high season for the ferris wheel, there was no one else riding when we got on. That meant that we got an extended ride and went around like 5 times. I’m fairly certain the operator just started the ride, went and drank a cup of coffee, and then came back to stop it. We got a great view of the city and the water, and the ferris wheel had those cars that you can spin around and around until you feel like you’re going to throw up, so that was fun too. I was just happy that my brothers weren’t there with us because they’re known for spinning those things so fast that you can feel your stomach trying to leap out of your body… and so fast that everyone watching is almost positive that your car is going to disconnect from the ride and spin off into oblivion. Thankfully, our experience was slightly less dramatic than that, though still pretty great.

After the park, we kept walking along the water. It was such a pleasant night, and hearing the water crash up against the shore is always so calming. There was a spectacular sunset, and all of that put together was almost enough to make me forget that the first few days were filled with rain and rain and rain.