Okay, here we finally are… Day 7! The week with my family was simultaneously the longest and shortest week ever. Each day was a jam-packed experience, but when the week was over, it felt like they had just arrived. I think that’s just the way life goes. It feels long when you’re living through it, but looking back, it seems like it all passed in a second.

In the last few years, I’ve been trying to really savor the good moments and those times when I have that feeling of inner peace like everything is as it should be. For me, that’s just making an active effort to recognize when things are great and memorizing everything about those moments. It’s almost like I take a second to step outside of myself, look at the scene around me, see the people, remember the feeling, and then go back into experiencing it. I don’t know if that makes any sense, but since I’ve started thinking that way, it’s made it easier for me to access those times and that peaceful feeling in my memory. Wow okay, bit of a sidetrack, sorry!

Like I was saying, Day 7! Our final day’s schedule was to visit Garni Temple and Geghard Monastery with a stop at Charents Arch along the way. Another one of my brother Mike’s requests (besides the hiking one) was to go somewhere with a good view of Mount Ararat. As far as I know, the two best places to see Ararat from Armenia are Khor Virap and Charents Arch. Unfortunately, my family was here during an incredibly hazy/cloudy/foggy week, and despite scheduling Khor Virap and Charents Arch 5 days apart, the visibility was equally horrible on both days.

The arch was built in 1957, named after Armenian poet Yeghishe Charents, and features words from one of his poems, For My Sweet Armenia, talking about how the beauty of Ararat is unrivaled in all the world. I’m sure we would have agreed if we had seen it, but mostly it just looked like someone pulled off an amazing magic trick and made the mountain disappear. I can’t complain though. If the worst part of the trip is the fact that we never got a good view of Ararat, I can live with that.

Charents Arch was a new stop for me, but I had already visited Garni and Geghard with Sarah. You can read more background information about those sites HERE. 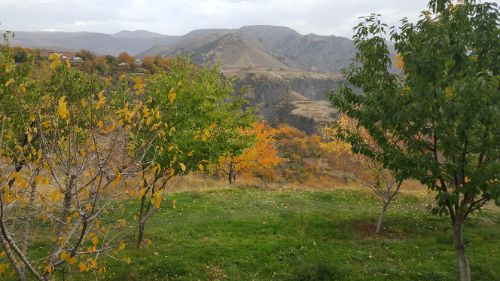 I did see some new things at Geghard, though. When I went with Sarah, we went with a taxi and had an hour to explore. This time, we had as much time as we wanted, and Mike and I did a little extra exploring. After we finished checking out the monastery and crawling into every nook and cranny we could find, we started heading back to the parking lot. Mike spotted a path going up the mountain and asked if I wanted to check it out with him. Hmm… random, semi-overgrown path leading to who knows where? Did he even have to ask? That practically screams “Lara!” 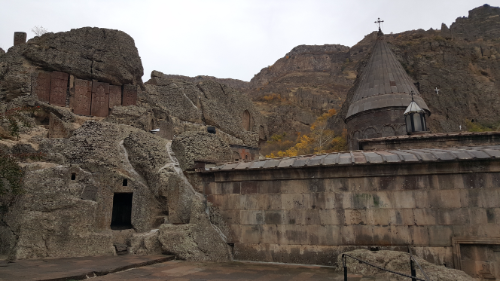 I wasn’t exactly dressed for a side excursion (black pants = dirt everywhere, boots with no traction = possible death), but you can’t let small details like that get in the way of adventure! Mom had read about how the Geghard monks used to live in caves surrounding the monastery, so we were hoping that’s what we were about to find. There were a bunch of caves, plus another little cave chapel popping out of the side of the mountain. I’m not completely sure how they managed to build some of these things…

We went into a few different caves that were definitely monks’ quarters. In one of them, Mike tested out what looked like a bed nook, or a “monk bunk” as we decided they should be called. Very comfortable, I’m sure. The Geghard monks were known for their simple, minimalistic, and hermit-y lifestyle, and what better way to live that life than in a remote cave with a stone bed?

A lot of the cave homes have been destroyed by earthquakes, so there isn’t a definitive number for how many there were. Some estimates are in the hundreds, and they weren’t all as accessible as the ones we saw. Supposedly there are/were some that can only be accessed by ropes or ladders! I guess I’ll have to take my ropes and grappling hook with me next time I go.

The cave chapel we saw is named after St. Gregory, and it’s said that he lived in one of the cave dwellings back in the 4th century when he was preaching in the region. I personally am just amazed at the fact that St. Gregory managed to do something at practically every place in the entire country. “This is where St. Gregory was imprisoned in a pit.” “This is where St. Gregory lived in a cave while he preached in the surrounding area.” “This church was built on a rock where St. Gregory once sat to rest on a long journey.” “This monument displays the grain of sand that touched the actual foot of St. Gregory when he vacationed briefly at Lake Sevan to regain his tan after being imprisoned in a pit.” “St. Gregory had a vision that this field was filled with flowers and when he came here and sneezed, flowers immediately grew.” “This village is where St. Gregory once got a flat tire and had to stay the night until it was fixed.” It seems like no matter where you go, St. Gregory did SOMETHING there. (Okay, yes, I made some of those up, but they could just as easily be real claims.)

I know, I let myself get sidetracked again. Sorry. In summary: there are caves at Geghard where monks used to live. St. Gregory maybe lived there. Cave chapel. Monk bunk.

After finishing up at Geghard, we headed back to Yerevan to wander around until dinnertime. I took my parents to see the office bunker where I work (it’s underground and has no windows), and we did some last-minute perusing at Vernissage.

Even though the planning for my family’s trip was a LOT of work, and I was semi-stressed the entire time because I wanted everything to go perfectly, it was so much fun to have them here. I certainly didn’t feel physically refreshed after they left (honestly, I could have used a vacation after the vacation), but I was emotionally refreshed.

Can you believe that practically everything went exactly according to plan? And the one thing I couldn’t control, the weather, was fantastic! I’m calling it a success! If you need an Armenia vacation planner, I’m basically a professional now.