The week is just flying by, isn’t it?? Day 5 was our Yerevan Day. We spent the morning at the Genocide Memorial and Museum, and it was just as exhausting as when I went with Sarah. Since I had already been, I perused a bunch of the photos and other materials that I skipped before. I think you would need to go back 10 times to see everything without your brain turning to mush.

After that, we had a low-key rest of the day and went to Vernissage. Before coming, Mike told me that I needed to “speak Armenian like a local” so that he could get the best prices there. Thanks, Mike. No pressure or anything. I certainly didn’t pass as a local, but I think I at least projected the illusion of knowing what I was talking about. Hopefully.

Day 6 was another crazy, hectic, “what were you thinking when you planned this?” kind of day. I wanted to go to Lake Sevan and Dilijan, and the only way we were going to have time for both was if we did them in the same day. So what choice did I have? No choice, that’s right.

We made our way to Sevanavank first, the monastery on a peninsula that used to be an island until the water level of the lake dropped from overusing it for irrigation. The water in the lake is a beautiful, brilliant blue color when the sun strikes it, but we were there early in the morning and it was cloudy, so instead, it looked a bit spooky. 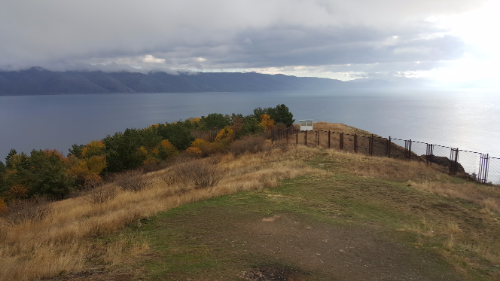 From there, we headed to Dilijan. Back before I made the schedule for the trip, I asked everyone to send me anything that they definitely wanted to see or do. One of Mike’s requests was for us to go on a hike together. The best place for that is Dilijan, so I was left with the task of figuring out where Mike and I could hike that Mom and Dad could be entertained for the time it took us to complete our hike. Then, a stroke of brilliance!

There’s a hike in Dilijan that goes from Parz Lich (lake) to Goshavank, a church in the town of Gosh. I also knew that there’s another monastery in Dilijan that’s supposed to be very nice. I Google mapped it out, and my suspicions were confirmed. We could make it work out perfectly! Mike and I got dropped off at Parz Lich which is a beautiful place anyway and especially in the fall. Mom and Dad hung out there for a little and drank some coffee while Mike and I started the hike. After leaving the lake, they went to Haghartsin Monastery and then met us at Goshavank. Our hike was supposed to take 2.5 hours which we decided meant 2 hours for us, and the timing was spot on! 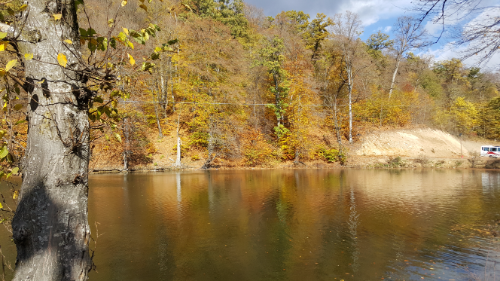 I know, I’m getting ahead of myself again. Mike and I had an interesting hike. It had rained the night before, so the ground was super muddy in some spots. To make things worse, it’s that clayey soil, so by the time we were 10 steps in, our shoes were about 10 pounds heavier from all of the mud stuck to them. Luckily, the beginning was the worst part, and we were fine after Mike fashioned us some walking sticks. 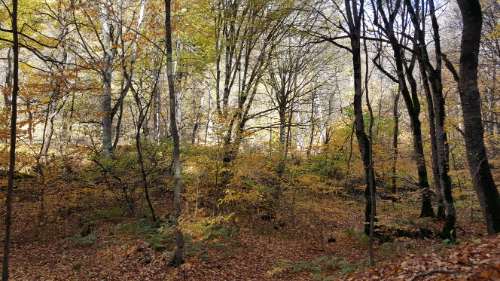 The hike itself was fabulous. The trees were at that perfect point in the fall when they’re all yellow and there are still enough leaves on them that it looks beautiful instead of depressing. The sun was shining through the trees, making the leaves look golden and the forest look mystical. At the peak of the hike, you have an amazing view of the valley and the mountains in the distance. It seriously looked like something out of a stock photo. It was also nice to have some time with Mike. Hikes are great times for good conversations! (Brace yourself for  photo explosion but I seriously couldn’t pick just a few.) 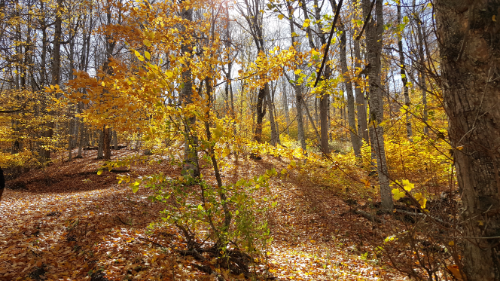 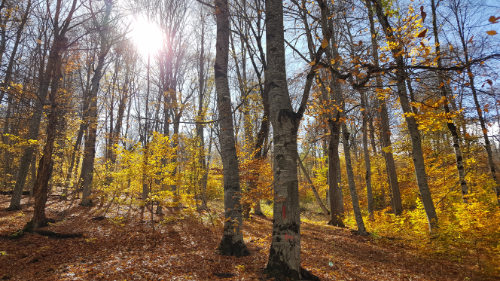 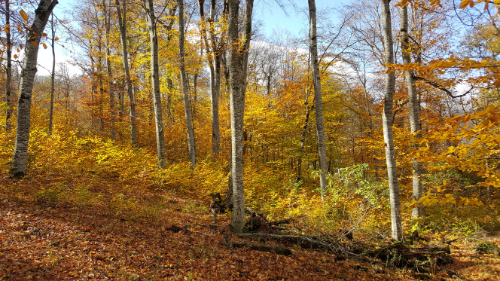 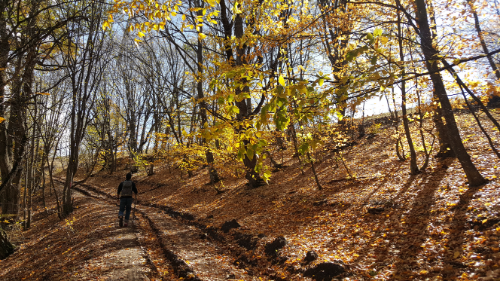 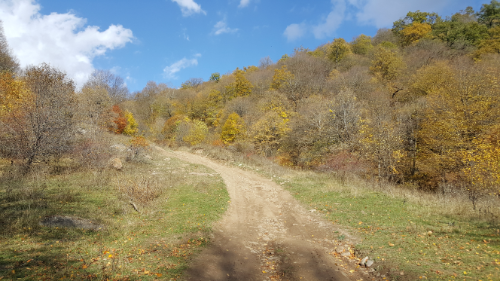 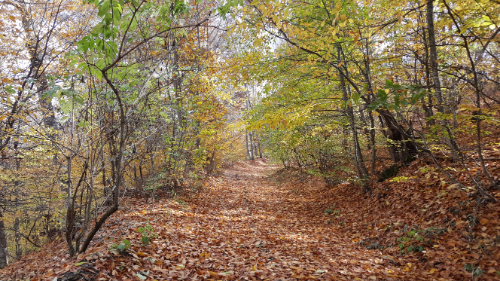 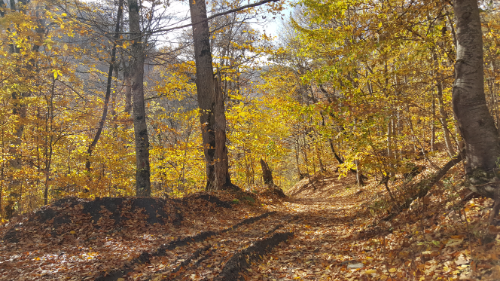 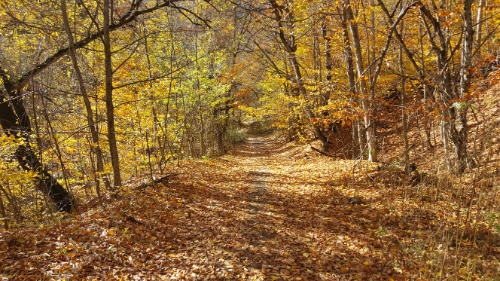 We beat our parents to Goshavank by a few minutes and spent that time eating Cheetos (gotta love that good ‘ole American snack food) and cleaning the mud off of our shoes. When they caught up with us, we all went to check out Goshavank together.

Goshavank is a monastic complex whose main church was built in 1191. There are way more buildings than I anticipated, and while the whole thing is quite nice, the coolest part is the bell tower and book depository. The book depository is a big, boring room, but on top of it is a chapel/bell tower, and you can see it through a hole in the ceiling! I wanted so badly to go inside the chapel, but the only way in is by using these cantilevered stairs that are currently unusable. Maybe that’s why I think that was the coolest part, because I couldn’t actually go inside, and I SO wanted to.

After Goshavank, despite the fact that Mike and I ate a bag of Cheetos, a granola bar, and a pack of M&Ms while waiting for our parents, we were starving. We went to a restaurant in Dilijan, Kchuch, that has the best pizza in Armenia (the competition, to be fair, is nearly nonexistent because I haven’t eaten many things here that could even realistically be called pizza, but it’s also good by real standards too). We had one of those stuff-your-face-and-then-wonder-why-you-ate-so-much-but-it-was-so-good meals before piling into the car to head back towards Lake Sevan.

We had two more stops on our list: Hayravank (another church, of course) and Noratus Cemetery. Both have some weird legends/stories associated with them, so brace yourself. Before I get into that though, let me just say that the drive from the town of Sevan to Hayravank is probably one of the best drives I’ve been on in Armenia. The road runs along the water, and the views are absolutely incredible. Even if there was nothing to see down there, I would still say that it’s worth the drive.

Hayravank itself wasn’t anything too spectacular, but the lake is awesome and so was the sky when we were there. The church is small and was built in the 9th century. Ready for the legend? Once upon a time, the Armenians were in a war (it seems like this is a common theme throughout history here). Some mean dude (that’s an understatement) named Timur was conquering his way across Armenia, killing everyone and destroying everything. When he went to Hayravank to kill the priest and destroy the church, the priest flung himself into the lake, and instead of dying, ran on the water.

Timur was amazed and told the priest he could have one wish (he was like a stingy genie – only ONE wish??). The priest asked him to spare the church and as many people as could fit inside. As more and more people piled in, Timur got suspicious and stepped inside just in time to see the priest turning the last person into a dove and releasing it out the window. The End.

Baffling, right? And I’m left with so many unanswered questions. Did the people get changed back from being doves? Did they remember the time they spent as birds? Did they know that was going to happen to them when they stepped into that church? When they changed back into people (assuming they did), did they have their same clothes on? Why was Timur such a jerk? I’m afraid that I’m going to go through life never knowing the answers to these questions. 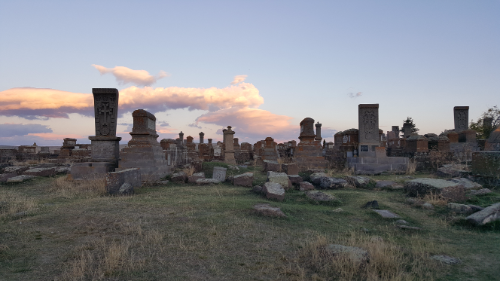 Finally, we went to Noratus. Noratus Cemetery is the largest collection of khatchkars. It used to be the second largest with the largest one in Nakhichevan, the territory to the southwest of Armenia that is currently controlled by Azerbaijan. That cemetery was destroyed by Azerbaijan between 1998 and 2005, and now Noratus takes the title.

The popular story about Noratus takes place during another time when Armenia was in a war. This time, an army approached from across the lake, and it vastly outnumbered the villagers. To make it look like they had more soldiers than they actually did, they dressed up the khatchkars in the cemetery with swords and helments. The army was fooled, and they retreated. 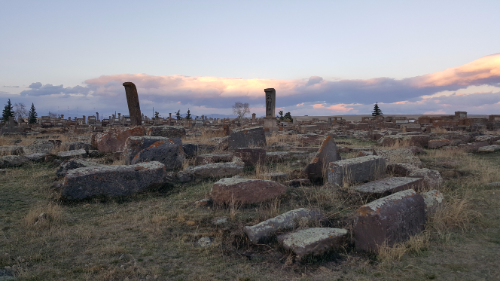 Okay, once again, SO MANY QUESTIONS. Who on earth had this idea in the first place? Where did they get so many extra helmets and swords? How dumb/blind was the army that they couldn’t tell that the “soldiers” they were seeing were a bit rectangular? I could keep going, but I’ll spare you.

It probably would have been interesting to go to Noratus with a guide who knew something about what we were seeing, but honestly, all I wanted was to go to sleep by the time we got there. It was another long day, and just stopping in and getting to check out the sunset was enough for me. 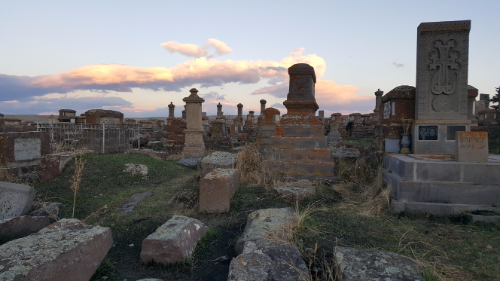 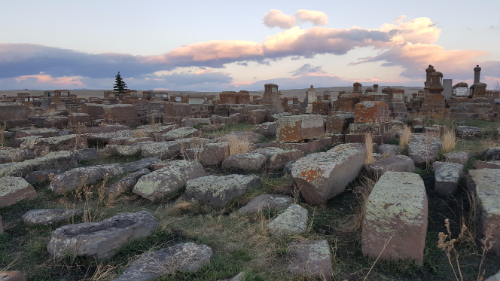 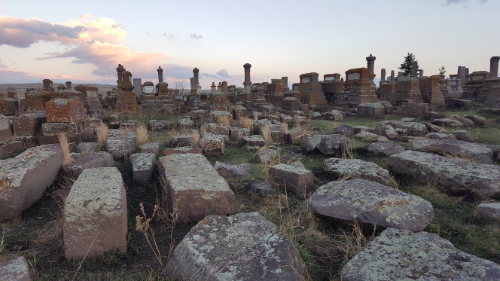