Since my time here is more than halfway finished, I feel like it’s past time for me to tell you a little more about Pastor Daniel and Ruth’s story, how they ended up here, and what work they’ve been doing in the community.

They met when they were studying at two different Bible colleges. I’m not sure about the details, but that’s not super important. Neither of them wanted to get married before finishing their studies, so they didn’t. Over the next five years, they studied, they graduated, Ruth got a job, Pastor Daniel went to school again, he graduated for the last time, and finally the wedding was arranged.

Now, both of them had been doing some thinking and praying about where God wanted them. Pastor Daniel felt very strongly that he was getting called to Bhutan. To put this in context, he and Ruth are both from South India. Bhutan borders India to the north, so going there would be a huge move that would take both of them far away from their families. At the time, the area of India near Bhutan had almost no Christians, and Bhutan itself is a Buddhist country (it still is). There was, and is, a lot of need in the area, socially, morally, and economically.

Back to what I was saying… Pastor Daniel was confident that he was being called to serve Bhutan. Meanwhile, Ruth had a friend from Bhutan, and the more she talked to her and prayed, the more and more confident she became that she was being called to serve Bhutan. At this point, neither of them had said anything to the other, but finally, Pastor Daniel knew that he needed to tell Ruth before they got married.

He told her, “God is calling me to Bhutan,” and he asked if she would go with him.

She looked at him. “God is calling ME to Bhutan.”

That’s how, two months after their wedding, they ended up packing up and moving to the border town of Jaigaon with only 10,000 rupees (about US$150) to start their new life. Ruth had a school connection who lived here, so the extent of their plan was to move, stay with him, and figure things out.

When they arrived, they realized that they need to rethink their plan, and quickly. The guy who they were supposed to stay with was having some family trouble and was not really able to host them. They were staying in a hallway in the guy’s house that also functioned as a church (a small house church), and they sat awake all night praying and wondering what they were going to do. 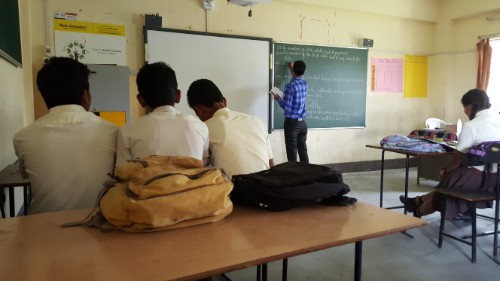 The next day, they found a one-room apartment with a shared bathroom. They had nothing to put in it, so they took what little money they had and bought only the essentials: a stove top, two plates, two cups, two bowls, a sleeping mat, etc. For the next 6 months or so, they got settled in the community and were doing some random ministry work, but they weren’t sure what the next big step was going to be.

They used to do prayer walks through the city, and Ruth said that they used to see tons of kids in the streets. They asked if they were in school, and the kids said no. They started giving free lessons and ended up with hundreds of kids coming, just through word-of-mouth. It was way more than they could handle, but they just kept working. Ruth also taught Sunday school in churches all over the city, and Pastor Daniel did ministry work in the towns around Jaigaon.

Finally, there was a turning point. Ruth had another connection from college who had a plot of land in Jaigaon, and he wanted it to be used for some ministry purpose. He asked them if that was something they would be interested in taking on, and they said yes, but they didn’t have any money.

He said, “That’s not what I asked,” and just like that, it was settled! In the time that the land had been sitting unused, squatters had moved in, and people were trying to re-sell the land. The guy fought it and finally got the squatters removed and the land returned to him. He signed the deed over to them and fundraised enough money for them to build the first two floors of what is now the church/house building.

At first, it was school/church on the first floor and house on the second floor, but as the school grew, it expanded onto the second floor as well. They were living in just one room, they had a baby, and they were running out of space.

Never fear, though! God was still working things out for them, and they connected with another couple who believed in their ministry and managed to raise funding for a third floor. Even more amazingly, the lot across the street was for sale, and the couple bought and gave them the land to build a proper school. The school was built one floor at a time, started with just kindergarten, and grew as the first class of kids grew.

Now, they have up to class 10 and are hoping to add “+2” (11 and 12) in the future. The school has almost 400 students and is regarded as one of the best schools in the area. The families pay what they’re able, and most of the kids are at least partially on scholarship. They still run free basic classes for street kids, and the promising ones are given scholarships to school.

Ruth said that when they first started the school, most girls didn’t go to school. Girls are expensive to marry off, so why spend even more money on them to give them an education? One of her big missions is to teach people that daughters are a wonderful gift and it’s worth keeping AND educating them. I’ve been so encouraged by the way that women are treated in the school and the church. It’s so clear that women are incredibly respected and are seen as being just as valuable and capable as the men.

Besides the work that Pastor Daniel and Ruth have done to teach parents that their daughters are worthwhile and worth educating, they’ve also worked to take away some of the additional challenges that often hinder the education of girls. One of the biggest of those challenges is a lack of access to affordable and hygienic feminine products, so when girls are on their period, they don’t go to school. That means they’re missing 1 out of every 4 weeks of school! How is it even possible to be successful under those circumstances?

To combat this issue in their school, they bought a machine and materials to make thousands and thousands of pads. They’ve educated the girls in the school about what is happening to their bodies and how to manage it, and the girls can buy a pad for just a couple rupees (like 5 cents). This is a huge problem in developing countries across the world, and it’s super encouraging to see it being addressed here! In addition, the pads are made by women in one of the nearby communities, so they’re also creating jobs for women. Is this not the most awesome thing??

In conclusion, Pastor Daniel and Ruth have the coolest and most inspiring story. They went from 10,000 rupees and homeless to running a grade school, a church, a Bible college, a pad “factory”, and more, thanks to their complete trust in God, some divinely orchestrated relationships, and their many skills and gifts. I feel like I find out about another thing that they’re involved with every day. Talk about a power couple! I could ramble on about how awesome they are for a VERY long time, but I think I’ll stop it here because I’ve given you enough to mull over for now.