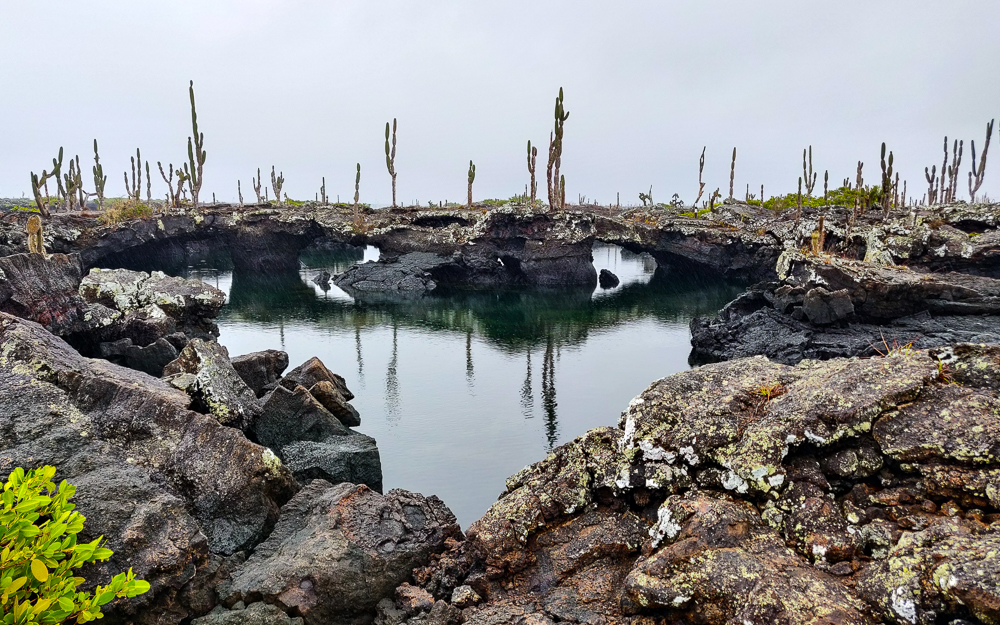 Does it feel like we’ve been in the Galapagos forever? Well, there are certainly worse places to spend however many months it’s taken me to write these posts. Believe it or not, though, we’ve made it to the final full day of our trip! We had one last tour scheduled, and the day kicked off when my alarm went off at 6:30AM… approximately 30 minutes after I fell asleep after spending most of the night trying, and failing, to fall asleep through the New Year’s party happening in the town square. Anyway, suffice to say that the day wasn’t off to an ideal start.

On top of that, it was raining. Of course. I was hoping that it would be like some of the other days when it rained in the morning but stopped by the time we got to wherever we were going, but we weren’t so lucky. The good news is that it’s hard to have a bad day in the Galapagos! Even with the rain, we got to see some amazing things.

Our destination for the day wasn’t too far away. We were headed to Los Túneles (The Tunnels), an area on Isabela Island (where we were staying) that’s known for being a great snorkel spot and for its lava formations. We’ll get to that, but first… it takes about 40 minutes to get there by boat, and on the way, we saw manta rays in the ocean!! I don’t think I even know that these things existed, and if you’re like me… think stingray, but HUGE. The ones we saw were probably at most 10ft (3m) from fin tip to fin tip, but on average, they’re about 15ft (4.5m). At their largest, they can be 23ft (7m) across! Oh, and weigh 6600lbs (3000kg). HOW did I not know about them?? Man, the ocean is a CRAZY place.

The captain stopped the boat so that we could watch them, and the guide explained that they are very curious and often stop to investigate/“play” with boats. They were sticking their fins out of the water (looking creepily like shark fins) and flipping over to show their bright white undersides. They may be intimidatingly large, but they aren’t harmful to humans. They can’t sting, and they eat plankton by filter feeding, like blue whales. To do so, they swim with their giant mouths open (the largest ones could fit multiple grown humans in their mouths… eek!) and direct plankton and water in with the help of these weird little flexible horns that they have. Everything goes through a filtering system, and food gets consumed while water gets expelled. They can also swim impressively fast. At a sprint, they can reach speeds up to about 22mph (35km/h), though they usually cruise at closer to 9mph (15km/h). One more fun fact… they have the biggest brains of any fish.

Here’s a not-great-but-best-I-have video of one of them surfacing. You can see the horns I mentioned (they’re the things sticking out of the water above its gills).

After they got tired of us, we continued along to our first stop. Los Túneles has some amazing lava formations. As its name suggests, there are lots of tunnels underneath the surface, plus caves and bridges. Remember how we’ve talked about how lava formed the islands? As we’ve seen in other places, there can be voids underneath the surface in the form of lava tubes and such. That, in combination with the erosion caused by waves crashing into the coastline, created a landscape unlike anything I’d ever seen before.

Aside from the fact that it was STILL raining, I was thrilled to have the chance to walk around. We got to walk over some of the lava bridges, and the water surrounding us was so incredibly clear that we could see all sorts of sea life swimming by! We saw a few golden rays (so, so, so cool to see them swimming! Even if they’re much smaller than manta rays), plus tons of sea turtles. Oh, what I would have given to swim in that water! But it’s a protected area, so no swimming allowed.

There were also a bunch of blue-footed boobies with some of the brightest feet I’ve seen, plus their chicks. We had seen a few newborn chicks on Espanola Island, and they weren’t especially cute… they looked a bit like dinosaur/alien babies. These ones were a little farther along, though, and they were little fluffballs.

From there, we headed to the snorkel spot. It wasn’t quite as cool as near the tunnels, mostly because the water wasn’t as clear, but there was a LOT of wildlife. In some places, it was very shallow, and the bottom had a lot of loose plant matter on it that people kept kicking up with their fins which made it even more difficult to see (just a PSA if you ever go snorkeling, especially with other people around. Try to keep your feet submerged while you’re kicking so that you don’t create bubbles, and be extra careful not to move the water too much if there’s stuff on the bottom! In general, just try to be aware of your surroundings. Your fellow snorkelers will appreciate it). 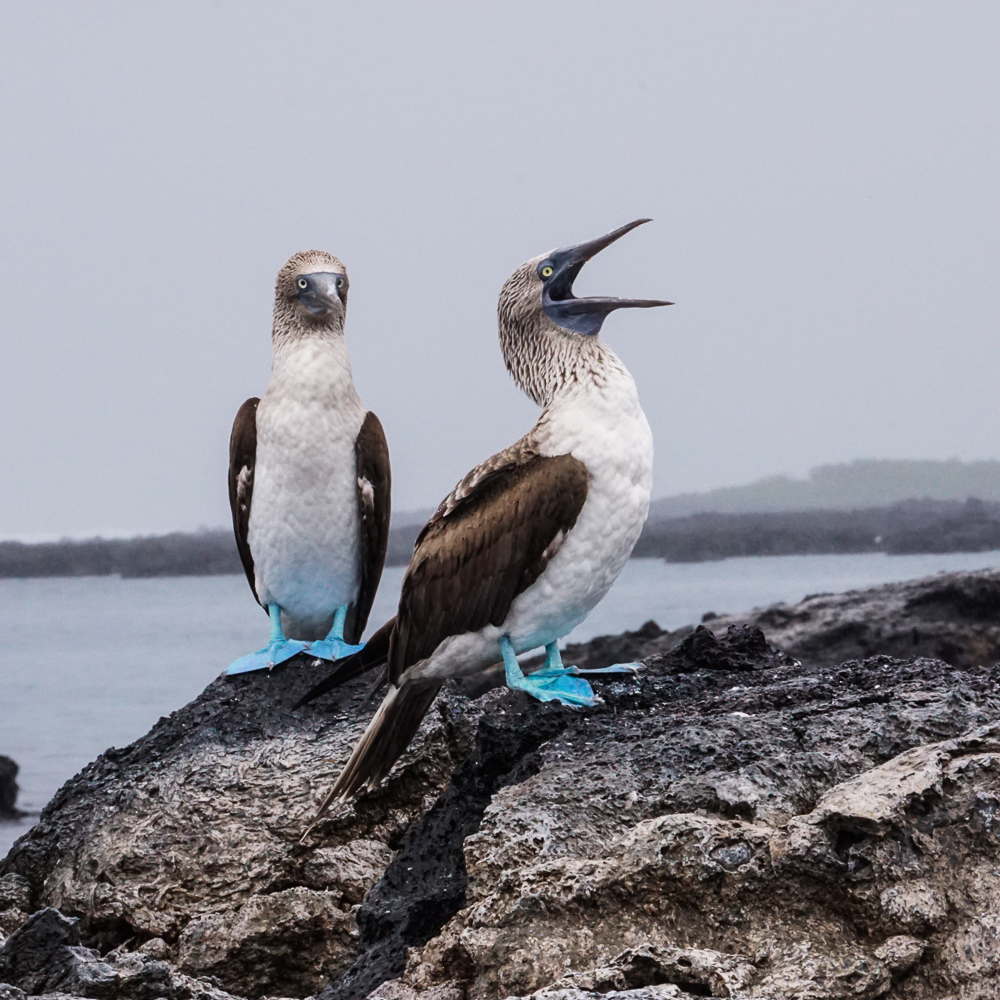 We saw SO many sea turtles, and some of them were absolutely huge… practically land tortoise-sized! There were approximately a billion fish, some in giant schools, that swam so close I could have touched them (but ew, no thanks). The most exciting thing was that we got to see sharks!! I know, who am I? Me, excited to see sharks? Well, I was also terrified, but I lived through my first shark sighting at Las Tintoreras and was ready for another.

The guide pretty much guaranteed that we would see whitetip reef sharks on the tour, named for the white markings on their fin tips (creative, right?) and the fact that they generally stick to shallower areas, usually in water 25-130ft deep (8-40m). They mostly hunt at night, and during the days, they rest in caves, often returning to the same cave day after day. A lot of sharks need to swim to breathe, but not these sharks! Their bodies can actively pump water over their gills, allowing them to rest in place. We popped our heads into a few of their resting caves and saw crazy numbers of sharks lined up across the cave floor like enchiladas. We saw one swimming, and I almost had a heart attack. He was right in front of me! Came out of nowhere and we were probably within touching distance. I backpedaled a bit, he turned, and whew! I survived. Again, though, I surprised myself and was more excited than scared. Nice!

The last thing we did was swim through a mangrove… grove? Mangrove forest? Through some mangroves? However you’d properly say it, you get what I mean. Mangroves grow in the water and provide a great habitat for all sorts of creatures, especially for those who are a little more vulnerable, like babies. They can hide in the tangled roots of the mangroves, out of the sight and reach of predators.

We had one last exciting sighting for the day… seahorses! The seahorses found in the Galapagos are Pacific seahorses, also known as GIANT seahorses. Get this… they average 4.5-7.5 inches in height (12-20cm). Massive, right? Like other seahorses, the males carry the babies. Females deposit eggs into a pouch, the males fertilize the eggs and seal the pouch, and after 14 days, they go into labor, pushing out little baby seahorses that are around a centimeter or less in height. They can be a variety of colors, including green, brown, maroon, grey, and yellow. We got to see three! They were clinging to the mangrove roots with their tails, and without a guide pointing them out, there’s no chance we would have spotted them. I suppose that’s kind of what they’re going for…

After that, we headed back to the boat and rode “home” to Puerto Villamil. To everyone’s delight, we saw more manta rays on the way back! What a great day!

That was our final full day on Isabela. The next afternoon, we took a ferry back to Santa Cruz to catch our flights to the mainland. I was headed to Quito, Ecuador’s capital, and the rest of my family was headed back to the States. We did have time for one more little exploration… near the dock in Puerto Villamil, there’s a snorkeling spot called “Concha de Perla” (Pearl Shell). It’s a sheltered little lagoon where you can swim with sea lions and turtles and rays… it’s supposed to be really great! We didn’t have time to snorkel, but we did enjoy walking there through the mangrove groves (hehe) and admiring the crystal-clear water at the other end. So, if you’re ever on Isabela, I strongly recommend snorkeling there. As for me, I guess I’ll just have to wait until I visit again someday!

Las Grietas and Los Gemelos – lava tubes and other cavities beneath the surface contributed to the formations in Los Tuneles. Check out some lava tubes and collapsed magma chambers on Santa Cruz Island!

Sierra Negra Volcano – hike to one of the volcanos that formed Isabela Island and admire some amazing lava colors!

Española Island – go back to where our Galapagos journey began and see some baby Nazca boobies!