Does it feel like we’ve been in Lebanon forever? It’s amazing how much you can pack into 9 days! All good things must come to an end though, and here we come (side note: I’ve just now decided that is a very dumb saying, and I’m not going to use it anymore. All it does it make you dread the “inevitable end” of the good). I spent my last couple of days wandering around Beirut, making sure everything was checked off my sightseeing list, and revisiting some of the things I saw with Badveli in the rain or the dark.

Maria and I went on an adventure to the “Etchmiadzin of Lebanon”. As a refresher, Etchmiadzin is like the Vatican of the Armenian Apostolic Church. It’s where the Catholicos (the Armenian version of the Pope) sits… but of course, nothing is simple, so here’s another quick, complicated history lesson for you. When Armenia was under the control of the Seljuk Turks in the 1100s, the Catholicos ended up in Cilicia and set up camp there. A couple hundred year later, when the situation in Cilicia started to fall apart, a new Catholicos was elected in Etchmiadzin. The Cilicia Catholicos settled in Antelias, Lebanon, and now there are two Catholici, with the one in Etchmiadzin serving as the supreme Catholicos. The Catholicos of Cilicia is responsible for the Armenian Apostolic churches in Lebanon, Syria, Cyprus, Greece, Iran, and the Gulf countries.

The compound includes a cathedral, museum, library, the Catholicos’s residence, and a school for clergy. There’s also an Armenian Genocide memorial that includes sand and bones from Deir ez-Zor, the major “concentration camp” located in the Syrian desert. I put that in quotes because those words imply that there was something there, but it was just open, empty desert where people were sent to wait for death. There used to be a memorial and museum there, but those have since been destroyed in the Syrian war. 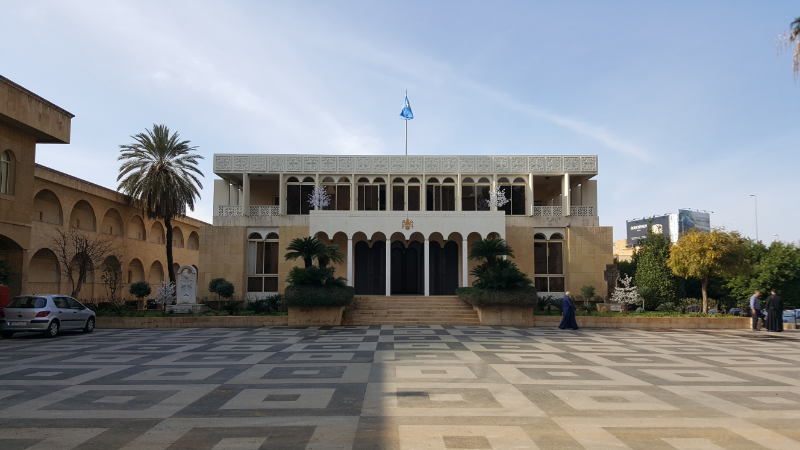 The rest of my remaining adventures took place around Beirut. I started out my last day with a leisurely walk to downtown on Armenia Street (the name changes halfway, but we’ll just claim it all for Armenia). There are some cool alleyways that I had noticed earlier in the week and wanted to go back to check out more closely. Based on my walk, I’ve decided that every staircase should be painted, and every walkway should be covered with a canopy of plants. Those two things make everything look at least 100 million times cooler.

Once I made it into town, I paid a visit to Martyrs’ Square… and by “square” I mean “parking lot with a monument in the middle”. The square was the location of executions of Lebanese nationalists by the Ottomans and was thereafter known as “Martyrs’ Square”. The first statue was erected there in the 1930s, and it showed a Muslim woman and a Christian woman holding hands over a coffin. The current statue replaced that one in 1960. Martyrs’ Square was a place to gather, a place to demonstrate. During the civil war, it was right on the dividing line of the city, and the statue suffered a lot of damage. After the war, they decided to restore the statue and leave it with some of the war damage as a reminder. It has reclaimed its former position and now sits in the middle of two muddy parking lots. There are plans to rebuild the square, but they definitely haven’t come to fruition yet. 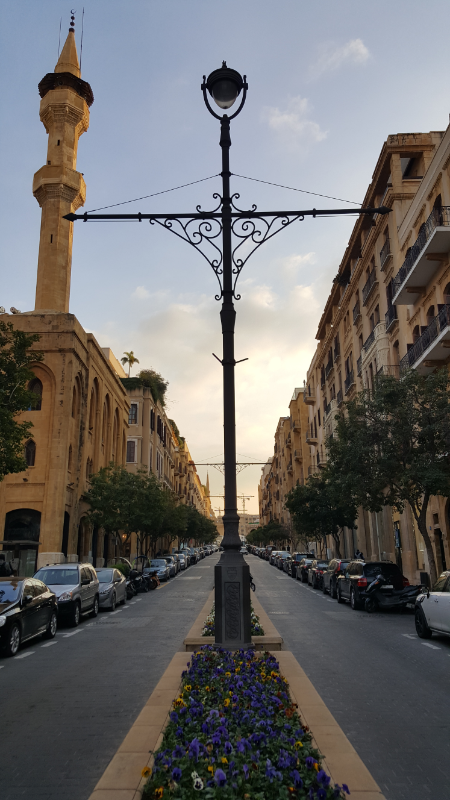 Another spot in the city that I visited with Badveli was the Beirut Souks. The name is misleading because “souks” implies that it’s a market, but it’s actually just a mall. Back in the day, it used to be a market. You know, one of those bustling, crowded, personality-filled markets. I love those places. The people-watching is always fabulous because they’re full of people with purpose. I think it’s cool when you’re in a place that seems like nothing but chaos to you, but when you look around at the people who clearly live and work there, they all know exactly what they’re doing and where they’re going. From the outside, it looks like chaos. To the people on the inside, it’s organized chaos.

When all of the post-war redevelopment of the city started, the old shop owners were offered money in exchange for their shops. The payouts weren’t fair, but with the compulsory purchase power held by the developers, people really didn’t have a choice. I think the new building is nice and all, but it’s just like any other shopping mall. There’s nothing “souk”y about it. They did keep the old streets as the layout for the new corridors, but like… come on. I wanted to hate the building because of what it represents, but I can’t pretend that I didn’t enjoy it a little bit. Especially since when I went with Badveli, it was all decorated for the holidays, and you know what a sucker I am for lights! It’s nothing unique though, that’s for sure. Essentially, it’s like any other mall you’ve ever been in. 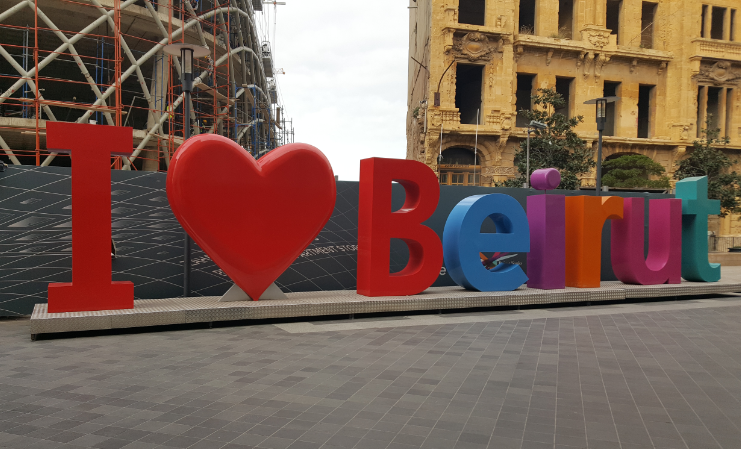 The final activity of my last day was a trip to a gallery, Beyt Amir. There’s a little café in the backyard, and we went there for lunch before checking out the show. Maria unfortunately had a lot of things to do at work, so that mostly left Badveli and me alone except for a quick few minutes during lunchtime.

The big thing at this gallery is a bunch of panorama-type pictures of Beirut at different points throughout history. There’s one from 1870, one before the war, one right after the war, and one modern day. Then, an artist did a drawing of what the 2052 Beirut might look like. At the café, the artist’s black and white panorama drawing has been split into pieces and it’s used for placemats! Each table also has coloring utensils at each table, sooooo they’re obviously telling you to color. Badveli and I were talking… and then we were coloring and talking… and then we were so into it that getting our food was almost an inconvenience because we had to stop coloring to eat.

I don’t know how long we sat at that table… but I do know that it was long enough for both of us to finish our masterpieces. It took stealing some markers and pencils from another table to make our dreams a reality, but we did it! It was only after we finished, took photos of our artwork, left them on the table, and went to the gallery that we realized we had colored a couple pieces of a bigger picture… and that our pictures fit next to each other! We rushed back to the table, and sure enough, they matched up perfectly! We found this to be extremely exciting and then obviously took a few more photos before going back to the gallery. 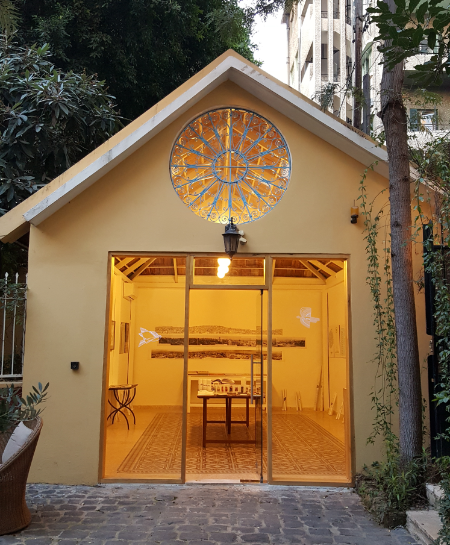 The exhibition was an interesting mix of things. There were the panoramas, plus some watercolors of old, damaged buildings from around the city. Those were cool because the surroundings were all just pen-drawn, and the building that was the focus was painted in watercolor. There were other things that were like little metal dioramas. They were showing war-damaged rooms and buildings but were kind of beautiful because of all the details and the lights that made them look like decorations. The building itself was also pretty. All in all, a great choice of lunch venue and afternoon perusal location.

And just like that, my time in Lebanon ran out. Badveli, Maria, and I had our last supper, and before we knew it, Hovig was downstairs to take me to the airport. Maria, in a classic Armenian mother move, insisted that I pack kuftes for the road… because that’s such a normal airplane snack… I pretend to grumble in those situations, but it’s nice to feel the love that comes along with the food pressure because you know that you’re only being forced to take/eat food because you’re cared for and no one wants you to waste away (like that’s even possible in an Armenian household).

I was sad to leave, but I went with a full heart. Seriously, it was just the break I needed to refresh me and prepare me for the rest of my time in Armenia. It was nice to be around familiar people, eat familiar food (because the food in Armenia is NOT the Armenian food I’m used to, but the Middle Eastern and Armenian food in Lebanon are exactly what we ate growing up), spend time in familiar community, and just have a little time where I felt like I was truly at home.