​I think Tuesdays might be the most exhausting day of the week. I have 4 hours of classes on Tuesdays, which is also the case on Mondays and Fridays, but Tuesday afternoon includes the two little kid classes (C1 2-3 years and C2 4-6 years). I’m wiped and really need to get to bed, so I’m going to keep this short(er) and put in a few more pictures.


The morning class was with C4, Ingrid’s kids. We had them do the same activity as the C3 kids yesterday, making their own city “maps” and including a bunch of different building types and other things that make up a city (roads, rivers, bridges, walls, etc). The kids have been so awesome with all of the activities we’ve done so far. They’re being creative and producing some really cool stuff. I’m excited to see what they create in the coming weeks, once we start building models and doing more interesting projects.

Lunch today was one of my favorites so far, Ají de Gallina. Debbie and I met once in the States when she was home for the holidays to talk about our class, and she made a Peruvian dinner… yup, you guessed it – Ají de Gallina. That was my first exposure to Peruvian cuisine, and I think it might have a special place in my heart because of that (and also because it’s good). Here’s an attempt at an explanation… I’m going to try to get this right. There’s a bed of rice and lettuce, a thick sauce on top that is made up of chicken that has been boiled and shredded plus some ground yellow pepper and other things, a hard-boiled egg, and potatoes. I don’t know how to describe it beyond that, so the picture is just going to have to be enough.

After lunch, Julie and I attempted to wrangle the little kids. We decided to do an activity with crayon rubbings of different objects to explore texture. Yes, I know… not the most “engineering” like, but it’s hard to find stuff that will entertain the kids in this age group. For the youngest group, we just showed them what to do, dropped a bunch of objects on the table, and helped them scribble all over their papers. For the older kids, we drew shapes on the papers, had them do the different rubbings inside the shapes, and then cut them out and made a picture. Shockingly, this managed to amuse them for a full hour, and some of the kids got really excited about it, running around trying to find other objects in the room that they could use for cool textures. Nice! Today was definitely busy, but at least it was a busy day with lots of successes. 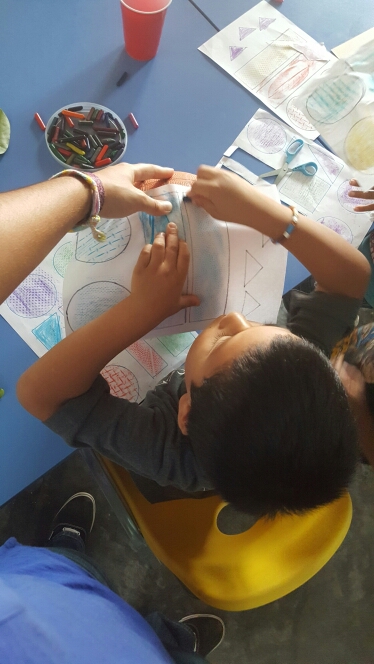