My train left Aguas Calientes the morning after Machu Picchu Day at 5:30AM. UGH for early morning wake ups. I forced myself to stay awake for the ride though because this time, I had a window seat! Easy to do when there are only about 10 people on the train. I tried to take some pictures of the ride, but between the glass in the way and the fact that I’d need an IMAX screen for you to really understand it, they’re not great. 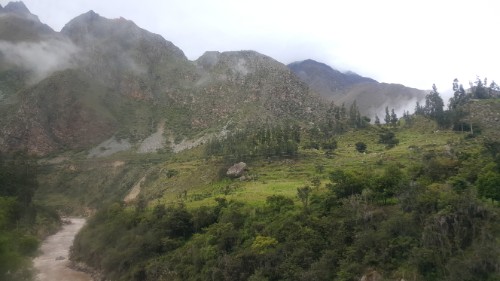 I decided to plan an adventure for the day, so I signed up for a mountain biking excursion that left from Ollantaytambo. It was just me and the guide, and I learned that mountain biking maybe isn’t my thing… No, that’s not true. I learned that I have plenty of room for improvement. I could totally do it. Anyway, I’m getting ahead of myself.

We drove from Ollantaytambo to Moray, another Incan ruin. This was one of the coolest ones though! First of all, it’s in great condition. Second of all, it’s super nerdy and shows how smart the Incas were. There are three different areas with circular, terraced depressions, and archaeologists think they were used to breed and genetically engineer their plants. Each different layer is at a different altitude and temperature, and this site allowed them to work with plants with varying environmental requirements all in one place. The deepest one has an almost 30-degree F difference between the top and the bottom terraces! They brought soil with the plants and had an irrigation system and a way to drain water out so that the depressions didn’t just turn into lakes.

The Incas managed to develop some amazingly strong plants. They needed to, if they wanted them to survive in places like Machu Picchu where the weather is constantly changing and the altitude is so high. It’s a shame that so much was lost when the Spanish conquered them. Most of the Incas were killed, either through war or through new diseases that the Spanish brought like smallpox and measles… I think I read somewhere that only 5% survived (though I potentially just made that up, so don’t quote me). That makes it much harder to pass on knowledge and scientific advances!

From there, we got onto our bikes and started making our way to the salt mines at Maras. It only took me about 2 seconds of biking uphill to realize that maybe I didn’t plan things so well. What idiot goes on a hike that’s ALL STAIRS and then goes biking the next day? This idiot. Those two things use a lot of the same muscles, and my quads were burning. Besides that, the air was still thinner than I’m used to. Between my burning leg muscles and struggling lungs, we made some slow progress. I just kept thinking how easy it would be to do the ride if we were at sea level, but instead, I looked like some biking amateur (how embarrassing). 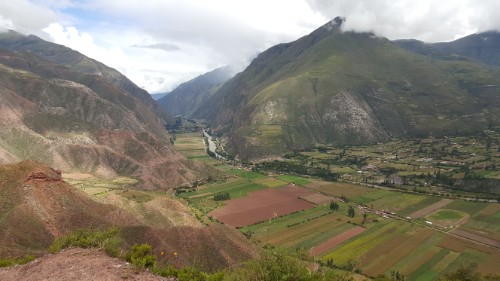 At some point, I got a flat tire. I don’t know how long it took me to realize that I had a flat, but in hindsight, I think the answer to that is “too long”. We stopped, and the guide checked out the damage. If it was me, I would have just replaced the tube, but I don’t know if he didn’t have the right size replacement for my bike or what because he ended up patching it. I see patches as a temporary solution that doesn’t work very well. They especially don’t work well when your tube has more than a couple holes in it. Especially more than 5. Or 10. Or 15. I think there were something like 17 holes in my one tube, and even after all of those were patched, air was still leaking out… just slightly more slowly. I couldn’t even guess how long it took to apply all of those patches, but I have a sunburn on my shoulders to commemorate the eternity spent on that shadeless stretch of trail.

I’m going to blame my couple of spills on the tire, just because I can. Also because I’m not convinced that they aren’t at least part to blame. One thing I learned about myself on the ride is that I REALLY don’t like tight corner turns, especially when the trail is covered with rocks that can shift and slide. The first corner I got to that I felt like I wasn’t going to make, I brought my bike to a stop and tried to put my foot down… but the seat was high, and I was on a hill, so I ended up just falling over from a complete stop with my bike on top of me. It’s a good thing that I’m past the point of getting embarrassed by things like that. I wasn’t hurt at all, but I did need a little help to get the bike off of me.

Fall number two was slightly more dramatic. I was coming around another questionable corner. The terrifying thing about these corners is that if you don’t make the turn, you literally ride off a cliff. So you’re dead. So just know that I wasn’t being completely crazy. This time, I’m not completely sure what happened. I think that I got freaked out at the last second when I didn’t think I was going to make it, braked too hard, and got thrown. I was incredibly calm through the whole thing, though. I remember flying through the air thinking, “whoops… okay hopefully this impact doesn’t hurt too much”, hitting the ground thinking, “well nothing is broken, so now I just have to hope the rocks don’t tear me up too badly”, and laying there afterwards thinking, “hm that wasn’t nearly as bad as it could have been. I could use a hand though.” Sure enough, I was fine. I had a couple of scrapes and cuts that were bleeding way more than they needed to, but no question it ended as well as it could have (the fall, that is. The ride could have ended better, for example, with me NOT falling).

Our second official stop (as in, not including the million flat tire stops and multiple Lara fall stops) was at the Maras salt mines. This is where most Peruvian salt is harvested. It’s been running since the time of the Incas, and the process they use currently is mostly unchanged from those days. Different families own the approximately 3,000 different pools, and they’re responsible for maintaining and harvesting the salt in their pools. Since this is the rainy season, there isn’t a lot of salt in production because the rain makes it harder to make quality, white salt.

Luckily, there was still enough going on for me to see how it all works. There’s a spring that feeds a salty stream that runs to the area, and that stream is routed into all of these different pools. When a pool is filled, the flow of water is stopped, it evaporates, and the salt is scraped off the bottom of the pool. It’s given a rating of quality, the best stuff is exported, and the rest is sold in Peru.

After the ride, I wanted nothing more than to get back to my hostel, take a shower, and lay in bed for a bit. The guide helped me clean my cuts, put me into a colectivo, and sent me back to Cusco, bruised and battered but feeling accomplished (mostly just for not dying). I think I’m going to take a short break from mountain biking experiences. Just for now.