I can’t believe it’s already the last week of school before the holiday! Part of me always thinks it’s kind of stupid when people say that. Like what, do you not understand how time works? Do you not remember living through all of the days and weeks that got you to this point? Then why should it be unbelievable? The other part of me, clearly, thinks it makes perfect sense.

Well, believe it or not, here I am. Tomorrow is a school holiday, so that means only two more days of classes until the “rainy season” holiday break. I don’t think I ever explained this, but the schools here are confusing. Every school has different breaks and different beginning and end dates for the school year. To give you an idea of just how different they can be, this school starts the school year at the end of March. Myra, little sister #1, goes to boarding school in the south, and her school year starts in mid-June. She’s been home since mid-April when their last school year ended… three weeks AFTER the new school year had already started for the kids here.

This rainy season break is the first of two month-long breaks they’ll get during the school year. Well, the younger kids get a month-long break. Classes 9 and 10 have extra classes! They all have a week off and then for the following two weeks, they have class from 9-12 each day. Jenrika and I have the class 10 kids for three days of three hour English classes on Monday-Wednesday and the class 9 kids on Thursday-Saturday of the first week. We’re currently trying to decide how we should spend that time, but I’m just happy that I don’t have to do it alone!

Tomorrow’s holiday is Buddha Purnima, a Buddhist holiday (obviously). It commemorates the birth, enlightenment, and death of the Gautama Buddha (Siddhartha Gautama). Buddhism was formed based on his teachings, so as you can imagine, it’s kind of a big deal festival day. As far as I know, people usually go to the temple to recite verses and listen to talks. It will be interesting to see if it’s obvious from the sounds of the city that it’s a holiday. Either way, I’m happy for a day off from school! 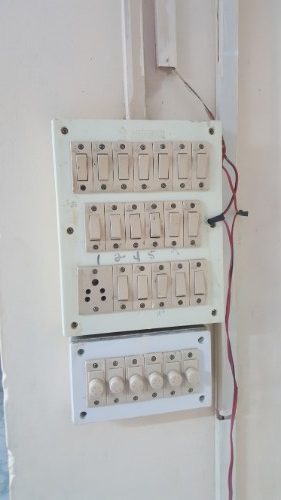 Random fun fact of the day: Light switches are done much differently here. At home, you’ll have one light switch that controls a bunch of lights. Here, there’s one light switch for each light, each fan, etc. As you might imagine, that makes for A LOT of switches. These are some of the switches for the chapel (the bottom ones are to control the fan speed and the top 3 rows are all on/off for the lights and the fans), but since the room is big, there’s another bank of switches halfway back from the front. You also might be thinking that this seems like a lot of switches to remember which controls what… and the answer to that is yes. No one knows what switch is for what, so anytime someone has to turn something on or off, they stand there switching things on and off until they eventually get to the right one. You can see that someone tried to label some of these, but the labelling doesn’t make any sense (at least as far as I could tell), and it still takes everyone an eternity to find the right switch. I don’t think I’ve ever seen someone pick the right switch in one of these ridiculous switch boxes a single time.