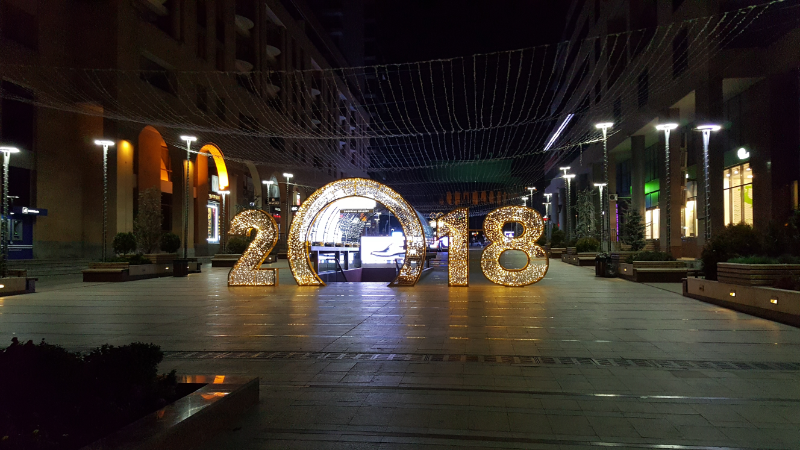 Happy New Year! Շնորհավոր նոր տարի (shnorhavor nor dari)! Wow! Can you believe it? 2018. I’m feeling good about this year based on nothing more than the fact that 8 is my lucky number. This has been my only New Year’s out of the USA, and it was definitely a different kind of experience!

I’m used to New Year’s being a sort of “friends’ holiday”. You spend Thanksgiving and Christmas with family, and on New Year’s, you spend time with your friends. Here, that is NOT the case. New Year’s is a massive family holiday, and it launches a celebration that lasts an entire week, until Armenian Christmas on January 6th.

Like everything else here, there’s a lot of history behind New Year’s. Throughout the years, it’s been celebrated on multiple different days. “Kaghand” new year was celebrated on March 21st, coinciding with the spring equinox and the awakening of nature. “Navasard” new year was celebrated on August 11th, the day that the Armenian patriarch Hayk defeated the Babylonian King Bel, a tyrant seeking to extend his power over the whole earth. That day, Hayk killed Bel in battle with a long arrow, guaranteeing the freedom of his people and establishing Armenia in the year 2492 BC. (Hayk apparently had a pretty busy life because he also helped to build the Tower of Babel. That’s the tower in the Bible that people were trying to build up to heaven, and God disrupted its construction by making the people speak different languages.)

Next, according to the Julian calendar, the new year falls on January 14th. This is now called “Old New Year” and is still celebrated, though to a lesser degree than “New New Year” on January 1st, recognized on that date after switching to the Gregorian calendar in the 18th century. Does your head hurt yet? Yeah, same. During the Soviet years, the new year was celebrated three times each year: at midnight the night of December 31st, at 1AM (midnight in Moscow), and again the night of January 13th.

New Year’s is when Dzmer Papik (Santa Claus/Grandfather Winter) comes and brings presents. Families gather and eat a big meal at midnight after spending the entire day cooking enough food for a week. No matter the economic status of the family, significant money and effort are put into the table for New Year’s. People do what they need to do to create a spectacular feast.

The rest of the week is national holidays, and they’re spent going from relative’s house to relative’s house, visiting and eating more. Apparently, there’s a proper order to do your visits in. You would visit your parents, for example, first and move through the relatives and close friends from there. The most important people should be visited in the first couple days. I don’t completely understand how you’re supposed to know if the people you’re visiting are home considering everyone is going around doing visits… who knows. But even if you’ve been visited at your home by someone, that doesn’t mean that you’re not going to go later and visit them at home too. Of course, each visit includes eating. It’s amazing that everyone in this country isn’t as big as a whale. 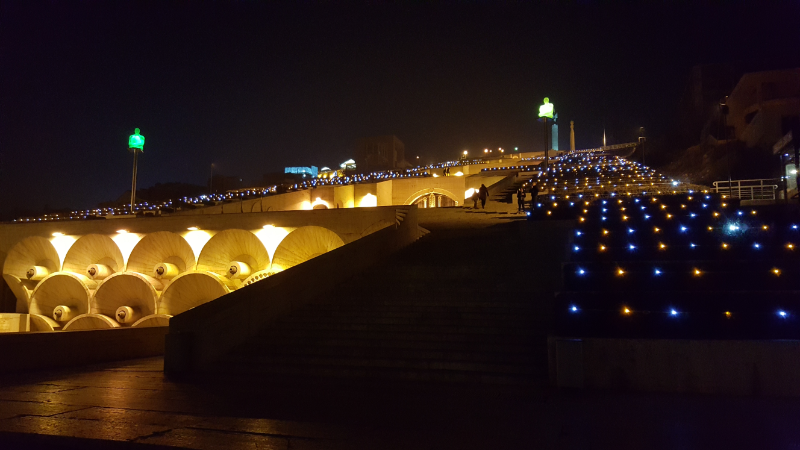 I didn’t have any big plans for the night until my friend Liz invited me to come over and celebrate with her host family! I was excited to get an authentic Armenian New Year’s experience. The walk over to their apartment was super eerie. I have never seen the street so deserted! It was especially startling considering how crowded everything was over the last couple of days as everyone did their last-minute shopping. At that point, the shopping was finished, and everyone was inside getting ready to commence the eating! I got to the apartment around 11:30, and Liz’s host mom was just finishing up cooking. They live close to Republic Square, so when the clock struck midnight, we crowded around the windows to watch the fireworks.

My plan before getting invited to Liz’s was to check out the festivities in Republic Square. They had a concert and a countdown and, of course, fireworks. In hindsight, I would have been miserable there. As usual, they were setting the fireworks off terrifyingly close to the crowd. When I talked to my parents earlier in the day, my mom said, “You’re not scared of fireworks anymore, right? You used to hate them!” Welllll. I don’t know that I would use the word “scared”, but I certainly don’t prefer them. It’s much better when you’re inside, can’t hear them as well, and can still see them. Everything definitely worked out for the better.

Besides having a great view of the official fireworks in Republic Square, we also had front row seats for the many backyard firework displays. They were everywhere. I saw some getting launched off the top of an apartment building earlier in the day, and I’m sure that’s not uncommon. Seems like a horrible idea. We saw a few flying out of Liz’s building, and it seriously looked like the people on the floor above were just launching them out of their window. I wouldn’t be surprised.

Being in Armenia has made me despise fireworks (previously I just had a strong aversion). At home, I only have to deal with them a couple times each year. Here, it’s practically every night. There isn’t like a 15-minute fireworks show, but there are at least a few because every celebration deserves some firepower. I think there’s something else going on right now too because some of the explosions sound more like little bombs than fireworks. They remind me of the firecrackers that the operations people would use back in university to scare the crows off campus. Is crow relocation a thing here too? I don’t know, but I’m not a fan. I’ll be happy when we’re back to the usual five fireworks per night and no terrifying firecrackers. (Side note: if you enjoy reading about crow relocation like it’s a man vs. bird war, check out THIS ARTICLE. Crow relocation was consistently one of my favorite wintertime amusements in university.)

Anyway, after the official fireworks ended, we went to eat the incredible meal that Liz’s host mom and sister prepared. There was enough food for thirty people, and there were four of us. Of course, everything was also delicious. I ate so much that I thought I was going to burst, and then they told me that dessert was next. Uh oh. There’s always room for dessert, though.

It was nice to spend time with a family again, especially after living alone for the last four months. Both Liz’s host mom and sister speak English fantastically well, so I got to participate in the conversation and really feel like I was part of their family. It was a lot of fun! After dinner, Liz, her sister, and I watched a movie together until about 5:30AM. I have no idea how I stayed awake so late, but I more than made up for it today when I slept until 2PM and still had to drag myself out of bed.

Tomorrow, while all of the locals are doing their annual family visits, I’ll be doing a family visit all the way to Lebanon! Get ready for another trip!