Bristol day! I started off my day at a coffee shop for breakfast and a hot chocolate. It was way expensive, especially compared to Armenia/Georgia/Turkey prices, but I thought it was okay to treat myself to something familiar. Sometimes you need that. It was also raining which didn’t exactly make me want to walk around just yet. The weekly forecast predicted rain EVERY DAY. Ugh. After leaving the (eventually) perfect weather in Istanbul, I was not interested in cold and wet. Thankfully, it cleared up throughout the day. The rain was kind of off and on, but it wasn’t strong, and I had my rain jacket and waterproof boots (thank you, Armenia! I bought boots there for like $20 which is maybe the best purchase of my life) to keep me at least slightly dry (there’s nothing worse than wet feet).

So, let’s talk about Bristol. Bristol has been an official city in England since 1155 when it received its royal charter (that’s the most British thing I’ve ever heard…), and it was a very important port city for much of its history. During the years of expeditions to the “New World”, it was the main departure point. When the colonies were more developed, it was one of the primary ports used in the triangular trade routes where manufactured goods were shipped to West Africa and traded for captured African people, the captives were taken to the colonies and sold as slaves, and plantation goods were taken from the colonies back to Britain.

The city was bombed during World War II, resulting in the destruction/damage of 100,000 buildings and the deaths of around 1,300 people. Some of the buildings are still in bombed-out and unrestored condition. Today, Bristol is no longer an active port city, and the old dock buildings have begun to be repurposed for various things including an interactive museum exploring the city’s history.

My first stop was Castle Park and St. Peter’s Church. Since I knew nothing going in, I kind of expected to see a church and a castle. Instead, I saw the very sparse remains of a castle and the ruins of a bombed church. St. Peter’s has been left as a shell, and there’s a plaque on the side listing the names of the people who were killed in the bombings.

I walked along the water for a bit and then went to my next church destination, St. John’s Church. This is the only remaining part of the medieval city wall because the church was built into the wall! The sanctuary, unfortunately, was closed, but I checked out the crypt. I didn’t know anything about the people buried there, but it was still fun to check out the architecture. I can only imagine how cool the church must be!

I wandered from there and ended up in another church, St. Stephen’s. Finally, a church that I could go inside! Hooray! It was nice and had a lot of intense stained glass. All of it was very detailed with images of different people and scenes from the Bible. Kind of overwhelming. I think you’d have to spend a month in there to give everything the attention it deserves. Honestly, it kind of made me miss the simplicity of the mosque interiors. I love the concept of having no living beings in any of the imagery in order to keep the focus on God. That’s such a beautiful concept! It also makes for some pretty incredible buildings.

It was weird being back in the land of churches after coming from the land of mosques. In Istanbul, I really enjoyed the mosques and the feeling of community that they contained. I appreciated the churches in Bristol though because they had people working when you visited, most of them had cafes, and it felt like they were actually operational instead of just old, empty buildings.

My wanderings then took me to St. Mary Redmond Church (see? Land of churches which means that 90% of the things to see are churches), a massive cathedral. They had guides that you could carry around with you to identify the million different spaces within the church. There was an abundance of stained glass here too, and the ceiling had that classic Gothic ribbing with the weird faces/carvings at the spots where the ribs intersect. 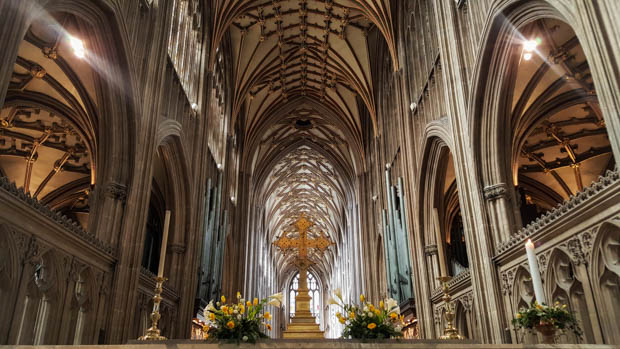 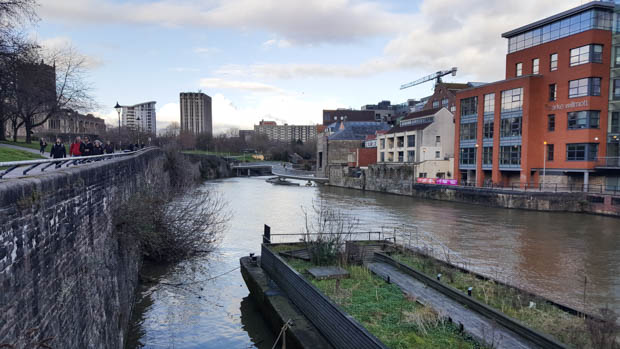 My plans were fairly loose for the day (aka I did a less-than-perfect job of planning), so after leaving the church, I just kept moseying around. I walked along the river, checked out an architecture museum that talked about affordable housing, walked across some bridges, strolled through Queen Square, and made my way to Bristol Cathedral. That’s another pretty fantastic building. It’s a Gothic cathedral with some serious buttresses and ribbed arches and high ceilings. Its architectural claim-to-fame is the fact that the aisles and the nave ceilings are at the same height, whereas usually, the nave is higher. It definitely makes the church feel more expansive!

The cathedral is located on College Green, across from the Bristol City Hall and this other church, The Lord Mayor’s Chapel, that was closed. That kicked off a series of visits to things that were closed, and along the way, I stopped in a thrift shop to see if I could find any Iceland-worthy clothes. Mike was making me nervous that it was going to be really cold, and I wasn’t going to be ready for it. I tried on the most ridiculous jumpsuit and decided that I didn’t need to rush my purchase because it would probably still be there in a couple days… I mean, it was obviously incredibly fashionable, just slightly out of season for Bristol.

I also walked through the Bristol Museum which was a mix of archaeological artifacts, art, animals, etc. It was free, and I could have spent a lot of time there, but I wasn’t really in the museum mood as long as it wasn’t raining outside. It’s also the same kinds of stuff you can see anywhere, so I didn’t need to spend my one day in Bristol in a museum. It was nice to see the building though.

My main destination of the day was the Clifton Suspension Bridge, a world-famous bridge that I had previously never heard of… Construction started in 1831, and after a series of delays for various reasons, it was finally completed in 1864 with a span of over 700ft. Since then, it’s become the most widely-known landmark in the city.

Random, interesting facts:
It was the site of the first bungee jump!
A woman tried to commit suicide from the bridge in 1885, but her skirts acted as a parachute, and she survived (and lived 60 more years!).

On the verge of collapse, I made my last stop of the day at Cabot Tower, a tower on a hill in some park. I almost didn’t go because I was tired, and since I didn’t do proper research, I didn’t even really know what it was. Thankfully, one of the google reviews convinced me because it said that it was free and you got a good view of the city. Okay, sold!

I now know that the tower was built in 1890 to commemorate the 400th anniversary of John Cabot’s expedition from Bristol to what is now Canada. Otherwise, there’s not much more to it beyond what I assumed… it’s a tower. After I finally found my way there, I proceeded to climb up the most skinny and windy spiral staircase in existence. The bottom stairs were tight to begin with, and then you made it to the first viewing platform only to discover that you weren’t quite at the top yet. The staircase to get there was even tighter!

As promised, the view was great. The sky had finally cleared up from the morning storms, so while you couldn’t quite see forever, you could see pretty darn far. I stayed up there for a while, enjoying picking out the different sights I visited throughout the day. At some point, I was gazing out at the city, and this guy came over to show me a picture he had taken… which looked almost exactly like the one that girl took of me on Galata Tower in Istanbul. He asked me if I wanted it, and I said yes and gave him my email address. Nice! I thought the whole thing was pretty funny, and I now know that I have an official “gazing out at cities” face. 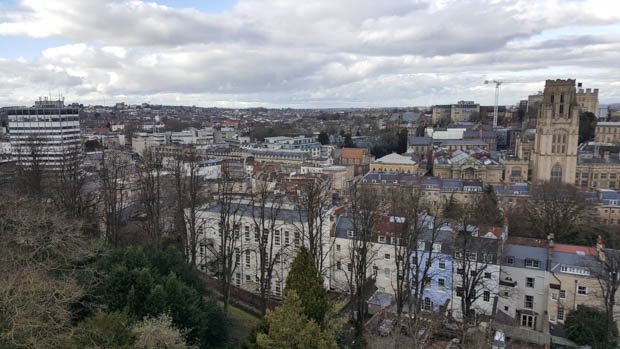 After that, I was about ready to collapse. This is one of those rare times when I wish I had a step counter or something to know how far I walked because it felt like an eternity. I grabbed some dinner on the way back to the hostel, including some vegetables because I felt like I needed some green in my life. That’s when you know I’m in a serious vitamin shortage! Plus, I needed to power up for the days ahead.