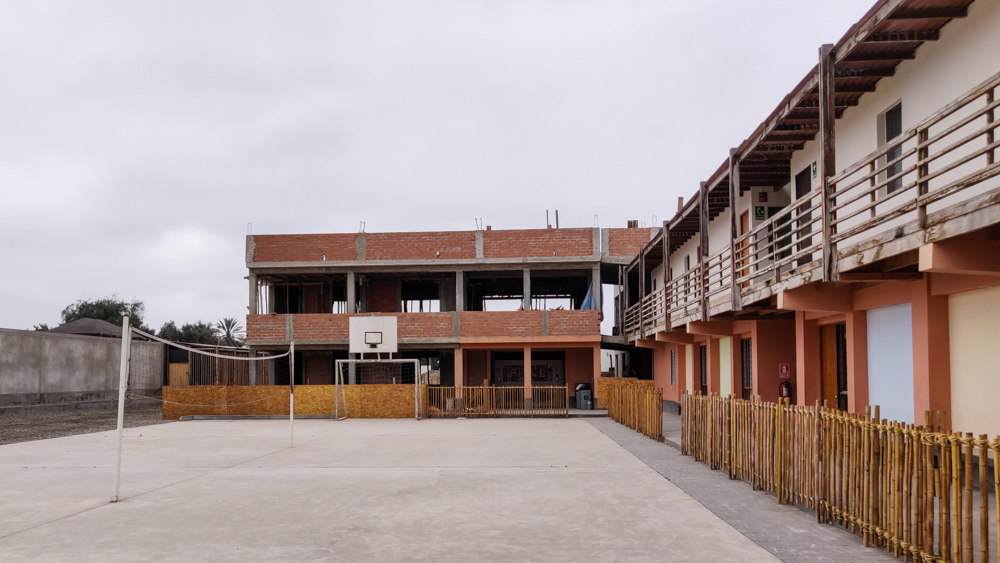 I know what you’re thinking. “Lara, it’s only been a week and you’re writing again? What, is the world ending?” I know, I haven’t been very consistent with this, but my original intention was to actually write weekly, so don’t be too surprised! And part of the reason I’m making such an effort is that I know there’s no chance I’ll be writing at the end of this week. We have two teams coming in back-to-back… aka as one team leaves Saturday night, the next team will be arriving which means we get no break at all for the next two weeks. Don’t get me wrong – it will be great. It’s always great to have teams here. But it also means that personal time is essentially nonexistent, and every workday is totally draining because I’m interacting with people all day and running around trying to make sure things run smoothly. So here I am, catching you up again before you can expect two weeks without a peep from me.

First, here are some pictures of the construction. I don’t have much to say because it’s all mostly superficial work now… so enjoy these pictures of things starting to look pretty!

We had a funky schedule last week. Most of the kids were off of school on Monday. Brace yourself as I attempt to explain why (parents would lose their minds if this happened in the States). The school decided to have a mandatory event on Sunday, and then they cancelled school on Monday to make up for it. We found out about this about 2 weeks ago which, given how far in advance we usually know about these things, is pretty darn good. This is something I’ll never understand, though. How can you just change the schedule on a whim like that? And expect everyone to come on a Sunday instead?? This kind of thing is nothing new, though. There are approximately a thousand holidays and festivals in Peru, and every time one comes along, it seems like there’s literally no one who knows whether the kids will have school. And then we find out the day before. To me, it seems like SOMEONE had to know if there was going to be school, right? (If not, we have bigger problems than I thought.) So why is that person keeping secrets? Just tell everyone so we can all share in the joy of knowledge!

I may not understand how they can operate like that, but I have gotten to the point where I expect it and am not fazed by it. I mean, lucky for me, the kids’ schedules don’t affect mine very much. School or not, it’s all kind of the same to me. But if I was a teacher, I don’t know if I could handle it.

Anyway, Monday was a “holiday” for the kids, but we all worked anyway. Then, Tuesday was an actual national holiday. All of the schools were closed, and none of our programs were operating. We still “worked”, but it was a Staff Day which is usually a training and team building day for the national and missionary staff. This time, they did something a little different and it was more of a rest and reflection day. Jim broke down the Lord’s Prayer, and we had time to ourselves to sit and pray over/reflect on each part. It was really nice. I felt like God used that time to help me work through some things I’ve been sitting on for a while. It was hard, but I felt so much better afterward and like I regained a sense of direction that I had lost a while ago without even realizing it.

On top of that, it was just nice to have time to spend with the rest of the staff without having to worry about the kids! We played an elimination-type game together before lunch, and it was hilarious watching how competitive everyone got. It was one of those games where someone calls out commands (a little like Simon Says), and some of the commands require you to get into groups of various numbers. When a command was called, everyone was grabbing people left and right to drag them into their group to get the right number. I was practically in tears from laughing so hard.

Friday had a “fun” surprise… Remember how Milton and I supervised the digging of a pool to chemically treat the bamboo for the new building’s roof? Well, they put some pieces in to soak on Monday, and Debbie asked me to give Milton a hand taking them out. “Okay,” I thought. “No problem. That’ll be easy.” HA! Joke’s on me. First of all, these bamboo pieces are 10-15cm in diameter and 6 or 7 meters long (sorry for the metric but that’s now the world in which I operate). Second of all, you know those lines you see on bamboo stalks? Those are the knots, and there’s basically a disk of bamboo there (so you couldn’t see straight through a stalk, for example). One of the dads worked to hammer a piece of rebar through all of the knots so that the chemicals could run all the way through the inside of the stalks… which meant that they were all filled with water. Which meant they were even heavier than before. And third of all, because there’s just a hole in the middle of each knot, the only way to get all of the water out is to stand them up nearly vertically.

Milton and I eventually got somewhat of a system down, but it was dependent on one person holding one end of the bamboo down against the ground (when all it wanted to do was seesaw up) while the other person walked their end up until it was completely vertical. The harder part was lowering it. There was one time with a particularly heavy piece of bamboo where I couldn’t keep the ground end down, and I basically nearly crushed Milton because as my end went up, the other one went down, and he was caught in the middle. At one point, we were holding a piece upright, waiting for it to drain, and he says totally seriously, “We’re going to die.” I burst out laughing but then also agreed with him… It did feel a bit terrifying every time. Thankfully, Debbie came to help with the last half, and with three people, the whole thing was significantly less precarious.

We now have 19 treated pieces of bamboo… out of 180. So, what I’m saying is, we’re nearly there! Ha. Haha. But, I do think there are plans in the works to build a structure to prop up the bamboo so that every bamboo-draining day isn’t the most terrifying day of everyone’s lives.

In conclusion, never bank on the accuracy of a Peruvian school calendar, chemically treating your own bamboo is neither as easy nor as fun as it sounds, and wish me luck for the next two weeks. See you on the other side!