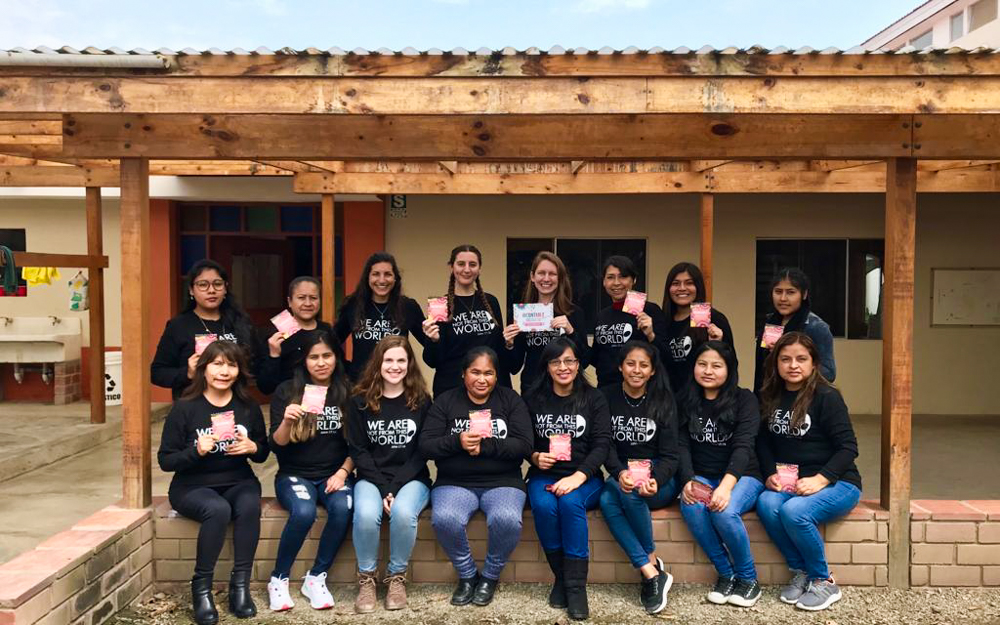 Can you believe September is over??!! I can’t, and I also can’t say that I’m very happy about it. It was a great month! Everything was normal – no crazy modifications to the schedule or extra things to worry about. The rest of the year isn’t going to be quite as calm. I know that the next few months will fly by even more quickly than September, and I’m trying to keep myself from stressing out about it! We have two team weeks in October, scheduled for consecutive weeks. November will be filled with the chaos of trying to pull together the finishing touches on the building and freaking out that I’m going to run out of time to do everything on my list. And I’m only going to be here for about a week and a half of December, so it barely counts at all. Ahh!

I could drag you with me down the black hole of swirling thoughts that keep my stress level at a steady higher-than-it-needs-to-be, but instead, I’ll spare you and talk about the last few weeks since I haven’t been doing very well with my “weekly” posts (a consistent theme, it seems).

The building. My gosh, the building. We have all three floors in place, and they’re starting to work on the finishes! EEK! There’s still definitely a lot to do, but the general shape of the building is there, and it’s huge. This is the only building on the property that has a 3rd story, and it’s so cool how much more of the neighborhood we can see from up there! It’s probably not cool for our neighbors because now we can see over their walls, but oh, well. Our one neighbor has a 2nd-floor balcony facing our property, so it’s not like privacy was ever much of a thing around here.

Over the next few weeks, it’s going to start looking like a whole new building. Only the brick walls are up now, and they’ll begin working on the drywall soon which means that we’ll really be able to see what the spaces are going to look like. Currently, they look super nice and well-lit by daylight, but that’s because most of them only have two walls! On top of that, Debbie is working on finding people to build the doors and the windows, and the electrician is going to start coming more regularly to start the wiring. Oh!! And the roof! The roof is going to be supported by a bamboo structure, and we started the whole bamboo preparation process this week.

On Tuesday, I got to work early and helped Milton, the maintenance guy, get everything ready for the bamboo delivery. Debbie was at the bamboo store picking out the individual pieces of bamboo… 180 pieces of 6ish-inch diameter, 6 and 7-meter-long bamboo. Yes. 180 pieces. Together, Milton and I supervised the removal of the rubble pile on the construction site, followed by the digging of a “pool” to be used to soak the bamboo in anti-bug chemicals. Yum. Then, he and I created an area for the bamboo to be stored while it dries. When I called Debbie to tell her we were ready, she said that the delivery truck was already en route! Geez! Then we had to unload it all which, thank goodness, the construction guys helped with. Even with the help, it felt endless! So now, we have a LOT of bamboo. And it all needs to make its way to the 3rd floor eventually.

On the topic of transporting things to the third floor… have I told you about how they move bricks there from the ground? I don’t think I have. They throw them. Yes, they THROW them. Watching them get the ceiling bricks to the 3rd floor was my favorite thing. One guy stood on the 10ish-foot-high pile of bricks… and I’m still not sure how it seemed like it never got any shorter because he was taking bricks from the pile he was standing on, but anyway… He threw them one by one to a guy standing on “scaffolding” (aka one board on a shaky metal frame) about halfway up the second floor who threw them up to a guy at the edge of the third floor who threw them to a guy in the middle of the third floor who put them in a stack. Three throws per brick. No pressure. I have a video, but Debbie told me not to post it because “it’s not really how they’re supposed to do things”. Maybe it’s not the safest in theory, but while watching them, I never felt like there was anything to worry about. I can show you the video another time.

Here are some pictures to catch you up on the progress!

Outside of work, the last few weekends have been super fun! Since “birthday weekend”, we’ve been doing our best to put things on the schedule for the weekends, no matter how simple. The first weekend after “birthday weekend”, we didn’t go anywhere crazy or do anything elaborate, but we did take some time on Saturday to play outside. Jocelyn and I started off playing 2-square (not the most exciting game… it ends up being a social time while simultaneously bouncing a ball between us), and eventually, Julie and Debbie joined and made it a full-on game of 4-square! Everyone gets a little competitive (though probably mostly me), so it was a lot of fun. It’s kind of ideal that there are 4 of us; it’s the perfect number for nearly every game. We should take advantage of that more often!

The following weekend was the women’s conference at our church. I didn’t know what to expect, and even if I did, I think my mind would have been blown. It’s quite the production. There were over 800 people there, and not just from Peru. There were big groups from Mexico and Argentina, plus people from Venezuela, Ecuador, Paraguay, Brazil, Chile… craziness! The weekend was full of performances and different speakers and really amazing worship. It was fun to be a part of it. And the speakers were in English with translators, so I didn’t even have to focus super hard to understand what was going on. Julie, Debbie, Jocelyn, and I stayed overnight in Lima on Friday and Saturday, and besides having a great time at the conference, it was so nice to be outside of our property walls for a change!

Last weekend was actually Jocelyn’s birthday weekend (unlike the fabricated Julie-and-Lara birthday weekend), and we went to the zoo to celebrate! It’s interesting to visit zoos in different parts of the world because while the major animals are the same, there’s a ton of diversity in the other animals depending on where you are. This zoo had so many varieties of birds and monkeys because they’re all native to South America, and some of them were things I’d never seen before. The highlight of the day, though, was in the “international” section of the zoo… they had three 1-month-old baby tigers!!! EEE!! They. Were. So. Cute. I could have watched them all day. There was a huge crowd around because the obsession with baby animals is universal. I mean, how could you not love them?

Anyway, as you can see, we’ve been busy, if only because we’re making up ways to keep things interesting. But the building project is definitely heating up, I’m starting to accept the reality that we have two team weeks coming up, and we’re all bracing for a truly busy October. Let’s see how long it takes for me to write again! (Ha!)

Galapagos sea lions can be seen - and heard! - thr

Marine iguanas are the only lizards in the world t

[NEW POST] The cliffs of Española Island are a ne

[FEATURED] Can you say "paradise"? These picturesq


Error: API requests are being delayed for this account. New posts will not be retrieved.