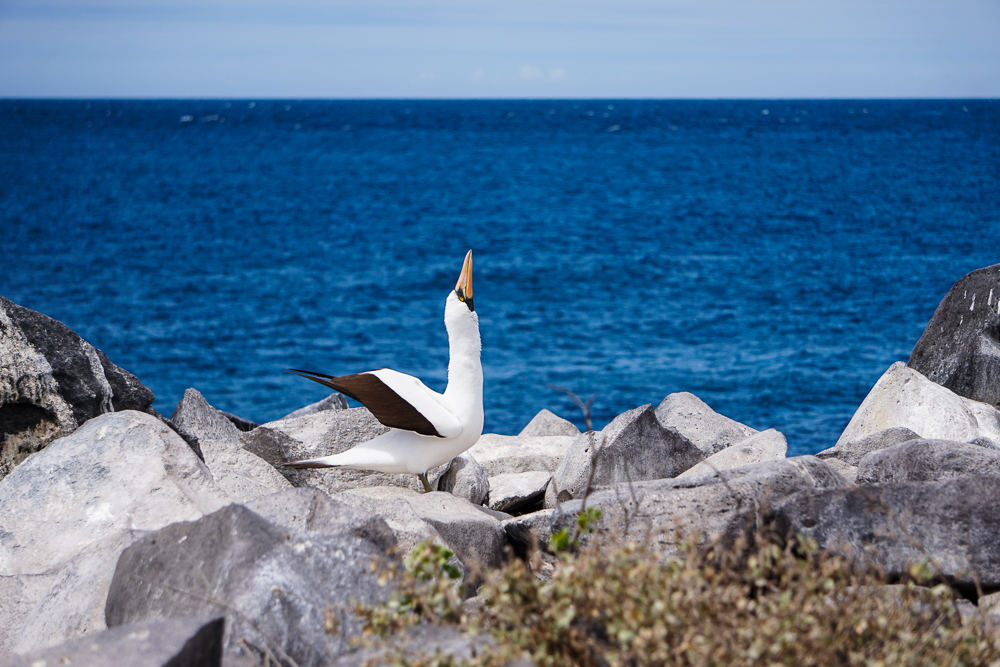 Our first tour day in the Galapagos started nice and early. We were making a day trip from San Cristóbal, where we were staying, to Española, one of the many uninhabited islands. Before we left, we had to get our bags and shoes checked to make sure that we weren’t taking anything that could negatively impact the island. Remember how I talked about the introduction of non-native species having a devastating impact on the islands during the colonial years? One part of conservation is making sure that islands are only inhabited by plants and animals that are introduced naturally. Animals are harder to bring along by accident (at least as an individual… but boats can bring rats, and they are terrible), but seeds can tag along without you even realizing it. They’re very strict about checking your shoes before you leave an island which seems crazy, but if you stepped in animal poop or mud, for example, there could be seeds traveling on your shoes to the next island. Admittedly, the system is far from perfect, and I’m sure that there are issues that come up, but it’s a start.

The boat ride to Española is two hours each way. People always warn about getting seasick in the Galapagos because the boats are generally small and the ocean can be choppy, so even though I almost never get seasick, I took some pills just in case. My gosh. It’s a good thing I did. Even with them, I felt like I needed to keep my eyes closed most of the time, and at one point, my face started heating up so I relocated to the back of the boat to feel the breeze. After that, I felt completely fine. It was just in the front with the stuffy air that I felt like I might explode.

Besides the “trying not to die” part of the ride, we also had an awesome start to the trip when we were joined by a group of dolphins! I’d say that there had to be at least a hundred, but who knows. They were swimming alongside the boat and throwing themselves out of the water. Sometimes they’d twist around midair, and the guide said they were playing with us. They definitely looked like they were having fun! They were just so free, so unbridled and joyful. It was one of the coolest things I’ve ever seen. When it was over, we all looked at each other and were like, “Well, if we don’t see anything else on this whole trip, it was still worth it.” I didn’t take a good video because I was too busy living it, so you’ll just have to imagine.

When we finally reached the island, we had a “dry landing” which meant we didn’t have to get our feet wet. The boat anchored nearby, and we used a dinghy to ride the rest of the way through the shallow water. We were welcomed to the island by the famous Christmas iguanas! They’re a subspecies of marine iguana found only on Española, and as you can probably guess, they’re bright red and green with the most vivid colors showing up during the mating season. 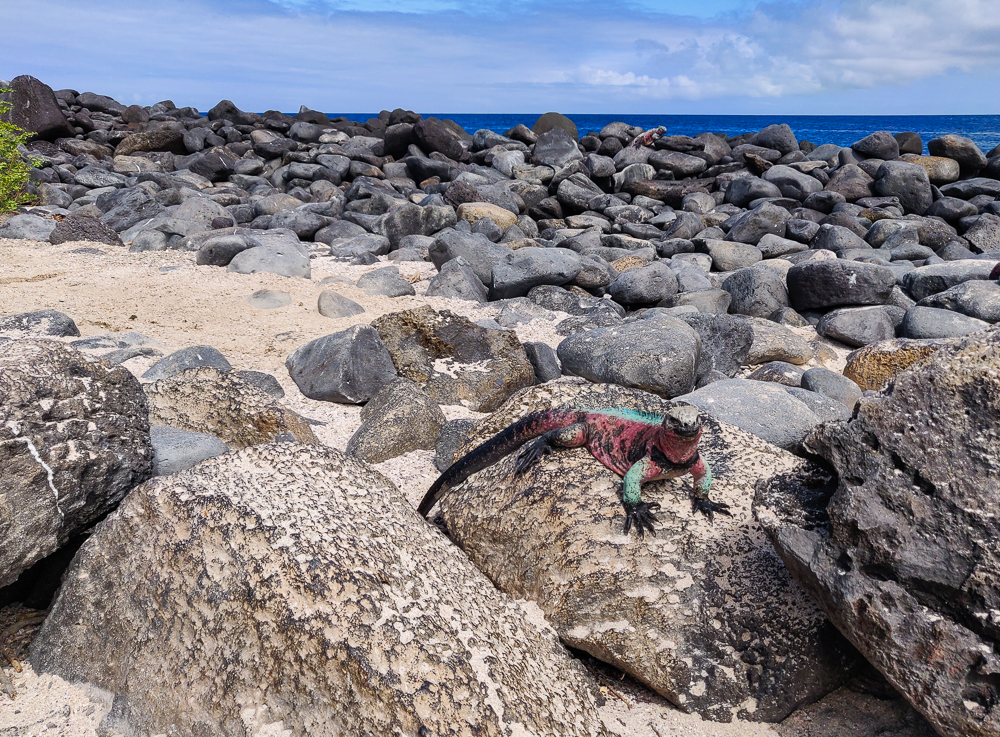 We took a walk around the island, starting at a beach on a little bay. There were more marine iguanas (Christmas and otherwise), Sally Lightfoot crabs, and a lot of sea lions. The guide explained that the bay is a good place for baby sea lions because it’s sheltered from the sea, and the moms and babies hang out here while the babies learn to swim in the shallow water. There’s a bull sea lion who is the alpha of a group of females and babies, and it’s his job to protect them. He patrols the perimeter and keeps sharks and predators away.

Here’s the weird thing… the alpha bull usually changes every couple of weeks. When a bull is alpha, he doesn’t eat because he’s so busy protecting the group. He gets weaker and weaker until another bull can challenge him and win because that bull has been eating. These challenger bulls wander around in “bachelor colonies” of similarly unattached bulls. Like… what?

People sometimes compare sea lions to dogs, and nothing says “dog” more than chasing your own tail: 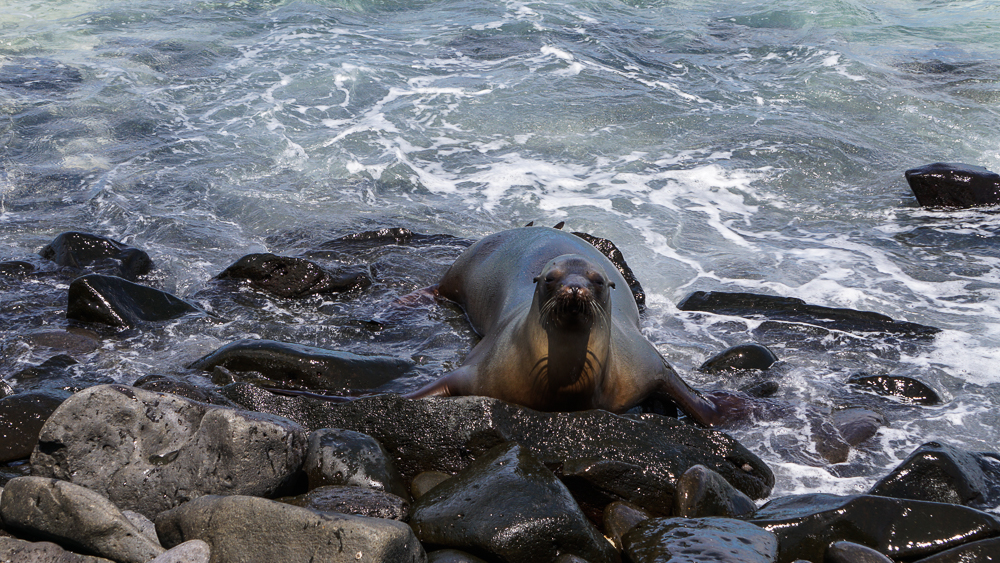 From the beach, we moved to the island’s cliffs where there are TONS of birds. Española has a lot of Nazca boobies, white and black seabirds with yellow eyes and pinkish-orange beaks. They eat fish which they catch by diving into the ocean at high speed. On Española, they nest on the cliffs, and we got lucky enough to see some eggs and even some babies! That was exciting because it’s not something you see every day, but the babies are suuuper creepy looking when they first hatch. Eventually, they get nice and fluffy, but they start out as these weird, grey alien dinosaur-like creatures. Eek.

The guide explained that only one baby usually survives, even if there are multiple eggs. One hatches first, and that one gets priority with feeding and such because the mom bird just assumes that it has a better chance of surviving. There are also cases where the older, stronger baby kills its sibling by dragging it out of the nest. Geez! The animal world is savage.

The other big-deal bird at Española is the waved albatross. These birds are HUGE. In the scheme of albatrosses, they’re only medium-sized, but that still means a wingspan of up to 8 feet (2.5m)! (Other albatrosses can have a 12-foot wingspan.) They come to the island only to mate and nest. Their mating dance is apparently quite the sight… lots of bowing, waving their beaks around, and smacking them together. Waved albatrosses mate for life, and both partners are involved in raising babies. Eggs have to be incubated for two months, and parents take turns sitting on the eggs/rolling it around for reasons unknown. After they hatch, the parents hunt and come back to feed them by regurgitating an oily substance into their mouths. Yum. Five to six months later, the baby can fly, and once they’re ready to leave the island, they don’t return until they reach sexual maturity and come back to mate, up to six years later.

So, what do they do during all that time at sea? They can fly insanely long distances, and they’re really good at using the wind to minimize their effort. They sleep on the water. They can have trouble taking off, so they try to use the wind to their advantage, and on the island, they have a runway to help them build up speed. When they need to take off at sea, they run on the water!

After we walked around the island, we headed back to the boat, ate lunch, and got ready for some snorkeling time. The boat dropped us off near the island, we swam along the coast for a bit, and then it picked us back up. I have some not-great pictures from snorkeling… I don’t have an underwater camera, so I put my phone in one of those waterproof cases. Better than nothing, but not ideal (it kept my phone dry, though, so that’s a big win in itself).

Here’s a sea turtle video! (I think I took it by accident, actually. It was hard to control the camera through the waterproof case. Hehe):

We rode the two hours back to San Cristóbal in near silence… I think everyone was exhausted. I sure was! And my body was either too tired to get seasick or else the ride was much smoother because I felt fine. After we got back, we ate dinner, lounged around, got our gear fitted for the tour the following day. Whew! The instant it was an acceptable time to go to bed, I was out.