Yesterday was another long and tiring day! I started writing this last night, but I was doing the whole fall-sleep-and-write-nonsense thing, so I figured that finishing it would be better left to today.


The afternoon was completely booked by a birthday party for the people with January/February birthdays. The kids get to drink soda and eat candy, and there were some pretty hilarious activities. They started off with some races where each person on the team had a straw in his/her mouth, and two teams raced to pass a plastic ring from straw to straw without using their hands. After that, they did a relay race where the team members had pass a balloon over their heads and through their legs, and then afterwards, the front person waddled their way around a chair while holding the balloon in between their legs. The process repeated until the entire team got a chance to waddle.
It was fun watching the kids play the games, but my favorite part (besides the cake, of course) was the dance party at the end. Ligia explained the rules: you dance around with the music while it’s playing, and once it stops, you freeze like a statue. The real fun began when the kids started to be creative with their frozen poses, the girls usually opting to hug each other and the boys pretending to fight.
After the party, we had a little down time to work on our robots, until about 5:30 when we left for a staff bonding excursion! I wasn’t sure about going because we still had a lot to do with the robots, but I’m so glad I did! It was cool getting to spend time with everyone outside of work, plus the excursion was great.

We went to Las Salinas in Chilca to do a group hike. The first part of the hike is pretty short, and you make it to the top of the first hill where there’s a huge cross and a nice view of Chilca. There are two ways to get there: the way you’re probably supposed to go, with a bunch of switchbacks, and the way we went, with an aggressive incline (I’d guess 60 degrees) and shale-type rock pieces sliding around. I thought the view from there was cool, but then we kept going! We went up more super-steep hills until finally reaching the top… where there was a random rock wall. I was confused about why it was there until we got closer and I realized that it wasn’t just one wall, it was a square of rock walls, and inside was a rock circle with one rock in the middle. Weird. The explanation of what it is makes it no less weird: aliens.


Chilca is obsessed with aliens. The tagline of the city is “Chilca es de otro mundo” or “Chilca is from another world”. There are a bunch of reports of UFO sightings, and the Chilca marketing people have run with the idea, making it the center of their marketing material. The pamphlets describing the attractions in Chilca feature pictures of a red-orange alien participating in activities from horseback riding to bathing in the lagoons that supposedly wield “energy from another galaxy” and have various healing powers (here’s the website).

Vanessa said that people come from all over the world (alien-enthusiast types of people) to do rituals or something to communicate with the aliens from inside the rock shrine. There’s some claim (by a Peruvian “UFO contactee” Sixto Paz Wells… if you’re interested, here’s a weird interview with him) that they’re drawn here because Chilca is on a geological fault and the released energy creates a magnetic corridor that their ships use. Or something. I’ll let you form your own opinions about that.
Whatever the reason for their existence, they’re impressive. The walls are made from rocks just stacked on each other without cement to hold them together, and they aren’t cut into specific shapes or anything to make things easier. Whoever put that place together had a lot of time on their hands.

Anyway, the view from the alien communication square was even better than the first lookout. I’ll just let the pictures speak for themselves. 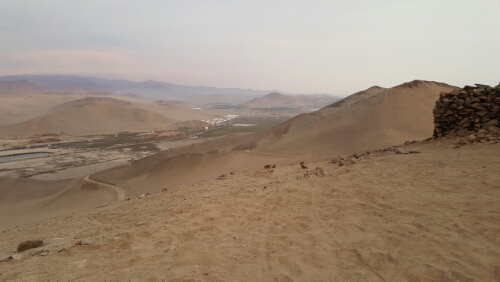 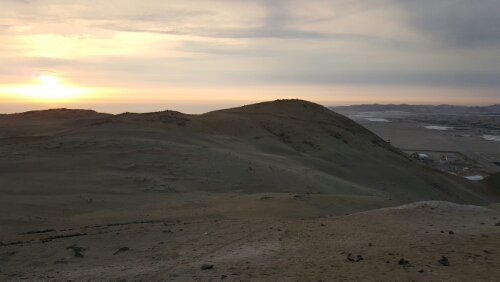 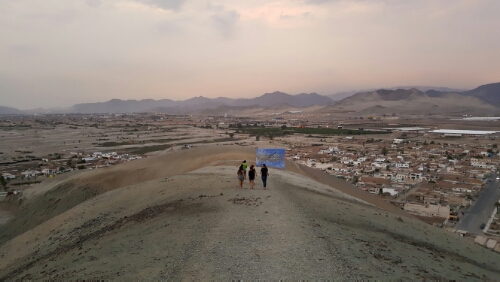 Debbie and I still had hours of robot work to do after getting back which is why I was falling asleep last night while writing. We finished the antenna connections around 10:45PM… ugh. But now they’re finished! And the hiking break was well worth the time.
Today wasn’t extremely eventful. We had our last period with Vanessa’s class and tried to wrap up their city and robots. It mostly went fine except that one robot started smoking when we put batteries in… ehh well, we’ll figure it out. That’s a problem for tomorrow!