​When we got to the farm this morning and John asked me if we wanted to use the hoes or the machetes, I thought it had to be a trick question. Why on earth would he think for a second that we would choose the hoes? I instantly answered, “machetes,” without even consulting the others, but luckily they confirmed later that they all wanted the same thing. Phew.


It’s a good hint that we’re going to get to do something fun with the machetes when they take the time to sharpen them. When we do things like sowing corn with them, there’s no need for them to be sharp. When we do things like chopping down dead corn stalks, we need sharp machetes. Today, we got to chop down tall weeds in another field that I didn’t know was part of our farm. I really need to stop pretending that I know anything about where our farm starts and ends because every time I’m sure I’ve finally gotten it, we go somewhere else that I didn’t know existed and my head explodes. It’s painful having your head explode so many times… but seriously, how could we have gone 6 weeks in the same parts of the farm and now in the last 4, the area we’ve covered has at least doubled what I knew about before? Sorry, I digress.
We got to chop down some tall weeds, and chopping things with a machete is one of my favorite farm activities. I feel like I’m doing what I was born for (this is the Ghanaian inside of me talking). It really is satisfying though… until you look down and realize that you have a million blisters and your hands hate you. This is another one of those “Did I have gloves? Yes. Did I wear my gloves? Of course not.” situations.

I was feeling invigorated when we left the farm, which was good because the next stop after breakfast was the clinic for another day of construction work. The task of the day was to make more blocks! Nick, James, and I got to help mix the cement/sand/water together, pack it into the molds to make the block shape, and push perfectly formed blocks like little concrete [sand]castles onto the ground to dry. Nick and I missed some of the beginning work because of the farm, but we spent about 3 hours there and made 300 blocks total! How did my hands feel by the end? Ha. Haha. Hahaha. Horrible. But you can’t show weakness in front of the guys! So I pretended I was fine and tried to adjust what I was doing so that I could spread the abuse out over my whole hand.
You’ll also be happy to know that the “Princess” nickname is now officially a thing. ALL of the masons have started calling me Princess Lara, plus some other various people in town. I just go along with it because that’s way easier than trying to fight it. Plus, who doesn’t want to be a princess?

Everyone went to Juapong in the afternoon because it’s market day there! A bunch of us wanted to buy fabric, and Avy’s birthday is tomorrow, so I had to secretly buy supplies for her surprise birthday cake. I got in touch with the same woman who made the cake for Evans’s birthday, and this time I asked for it to just be a chocolate cake because the last one was a swirl, and the chocolate part was so much better (though they were both good). Anyway, I was hoping that Avy wouldn’t come with us, but no such luck. Instead, we had to make up some clever stories to split up and sneak around the market, hoping she wouldn’t see us. There was one close call when I was trying to buy eggs and had to stop mid-sentence to run away from the egg stand, but I think we’re okay. I guess we’ll find out tomorrow! And hopefully she’s a good sport and plays along even if she knows.

The days here feel so incredibly long. When I think about working at the farm this morning, I’m blown away by the fact that that was today. I know it’s going to happen, but it’s hard to believe that 3 months are going to fly by when each day feels like a week. I think that it’s just because we do so much every day that it seems like it all shouldn’t be able to fit in 24 hours. 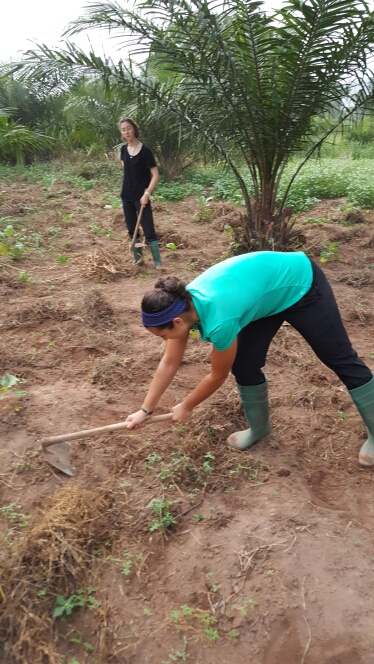 This morning at the farm, we helped to clear weeds in one of the fields by using hoes to slice the tops off. It was exhausting, but I was just happy that we weren’t using the machetes again so my hands have time to heal.

We also learned a little more about the locals who work at the farm. They also have farms of their own to take care of, so they spend hours working at the orphanage farm and then go home and rest by working at their farms too. I don’t know how they do it. An hour and a half each morning is more than enough for me.

School was rough. I’m still excited to work with the kids, but it’s so hard trying to reach a class with such diversity of skill levels. We did a writing exercise in English class, and some kids were great while others could barely put together a sentence. Where do we go from here? I find myself constantly trying to think of ways to engage them while also teaching them. I’m determined to figure this out.

We spent the afternoon at the market in Juapong, a town about 20 minutes south of Frankadua. It was great! We’re really not living in a tourist area, so practically everyone we encounter is Ghanaian. Going to the market made me feel like we’re really becoming part of the community, especially since, for the most part, no one gave us weird looks for being there. It’s nice to already feel that sense of belonging. 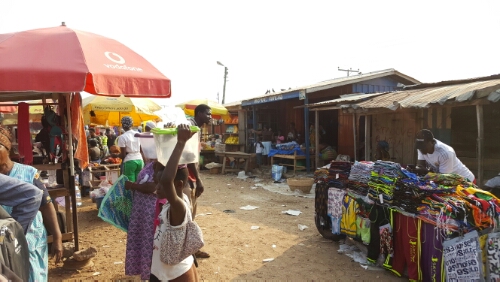 I also experienced my first tro tro ride on the way to the market and back! A HUGE mode of transportation in Ghana is a bunch of privately owned minibuses that drive back and forth along set routes, called tro tros. They’ll pick you up from wherever along the route and will stop wherever you’re getting off. They can also get quite crowded… I’ve had multiple friends tell me about times when they had to hold random children on their laps due to the space. We got to the market for about 1.70 cedis each (the exchange rate to US is around 3.8:1). I still don’t totally understand how their routes work, but I’m sure I’ll get the hang of it soon enough.

Okay, I need to go to sleep ASAP. Tomorrow is going to be such a mess. So. Tired. I need to start sleeping more! Good night!!!