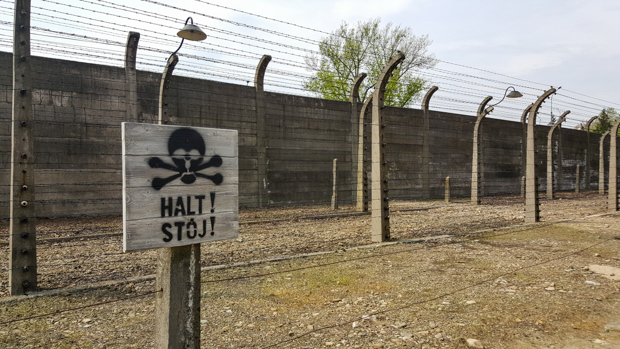 Poland was added to my “must go” travel list during a visit the Holocaust Museum in Washington, DC. Before that, I don’t think I’d ever thought twice about Poland, but I was standing there, looking at a map of the concentration camp locations when I realized that if I wanted to really understand, I could go visit one in person. What was stopping me? (Not a job, like any normal person.) With that, my future was decided; my trip to Poland was definite. I obviously ended up wanting to see much more of the country, but that was the spark that got me there.

It’s always a difficult experience to visit somewhere like Auschwitz. There’s so much emotion tied up in the place, and it’s challenging to figure out the best way to manage it. This is my general approach… On one hand, you don’t want to completely desensitize because then, hearing something like “1.1 million people were killed here” isn’t emotionally jarring. You SHOULD feel uncomfortable. If not, you aren’t allowing yourself to truly process that reality. On the other hand, you can’t let yourself feel everything fully because then you’ll never be able to continue existing. You won’t get through the experience, you’ll turn into a puddle of despair, and you won’t learn what you need to learn. You need to hover somewhere in the middle. You give yourself a chance to process. You try to turn the numbers into actual people. You let yourself feel… and then you also remember that hope exists, that this massive evil doesn’t define the entire world, and that in you taking the time to learn and mourn, you’ve already helped to move the world one step in the direction of becoming a better place.

Auschwitz is near Oświęcim, Poland, about 1.5 hours from Krakow. I took a bus there and got a general entry ticket when I arrived (note if you’re ever planning to visit – I thought I needed to get a ticket online and freaked out because there were barely any left… and then I had no problem getting one on the spot when I showed up that day). You can also choose to get a tour, but I ended up deciding no because 1. I’m a cheapskate (normal entry to Auschwitz is free, or they have paid tours in various languages) and 2. There are some things I like to do on my own, without having to worry about moving at a group’s pace. A guide isn’t REALLY necessary because there are a lot of informational signs, but it would have been nice to at least know what buildings to visit first.

Auschwitz was actually a camp in many parts (there were 48 “Auschwitz” camps, most of them small work camps that manufactured goods for the war). The two main parts were Auschwitz I and Auschwitz II-Birkenau. Auschwitz I, as the name suggests, was the original concentration camp. Some former army barracks were used as the starting point, and the majority of prisoners were Polish intellectuals, resistance members, and Jews. Within a year of opening, nearly 11,000 people were imprisoned there. 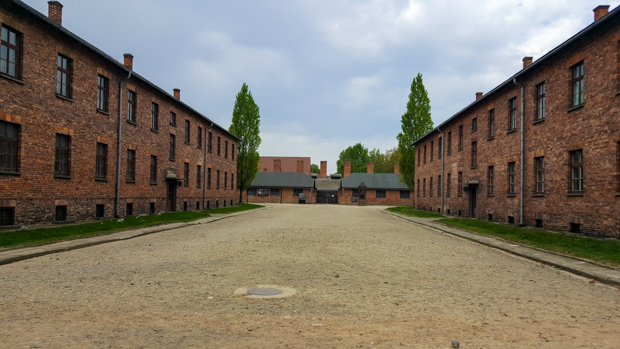 When visiting Auschwitz I, you take a similar route into the camp as the prisoners did. You start in the building where new prisoners were processed and make your way through the famous entry gate that declares, “Arbeit macht frei”. Work sets you free.

On the way to the gate, you pass a large green. The signs nearby explain very matter-of-factly that this was one of the sites used for shooting executions. The camp map has letters to indicate various locations: “C – sites of execution by shooting, D – sites of execution by hanging, E – sites of mass gassing by means of Zyklon B, F – sites of murder by lethal injection”. I read through those a few times before the words really sank in. In case you forgot where you are, this is Auschwitz.

For me, it was incredibly hard to reconcile what I was seeing in person with the reality that I knew. Inside the gate, the camp doesn’t look like the place of nightmares. There are brick buildings, tree-lined paths, green grass, wildflowers… if you didn’t know where you were, it would seem almost serene. 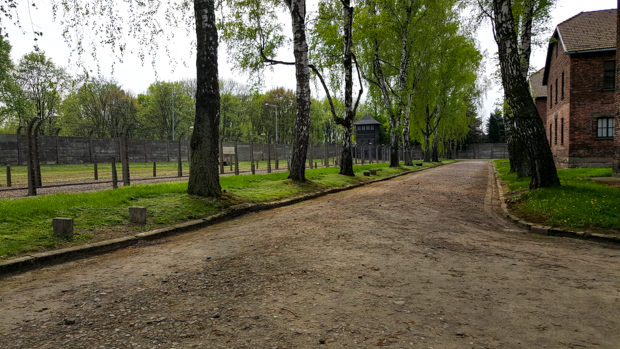 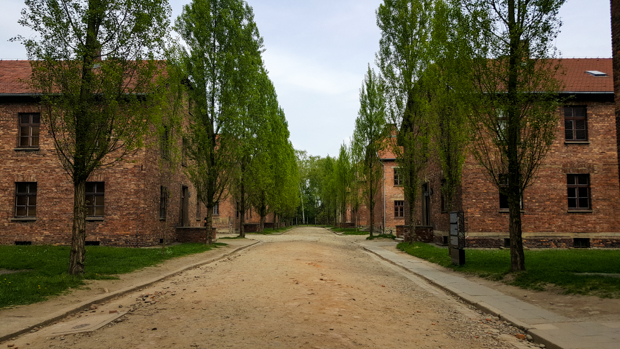 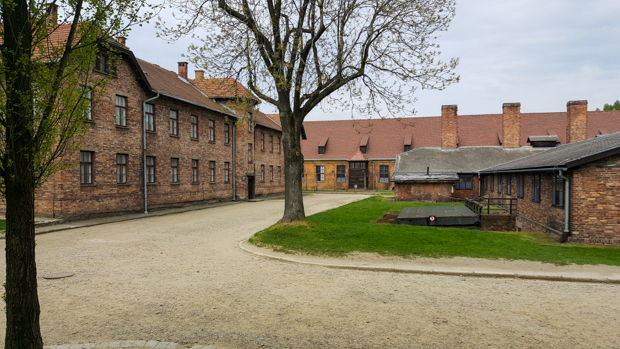 That potential feeling of serenity is extinguished around the perimeter of the camp. There, multi-layer barbed wire fences, imposing guard towers, and intimidating HALT! signs snap you back to reality. I couldn’t look at the signs without getting chills. 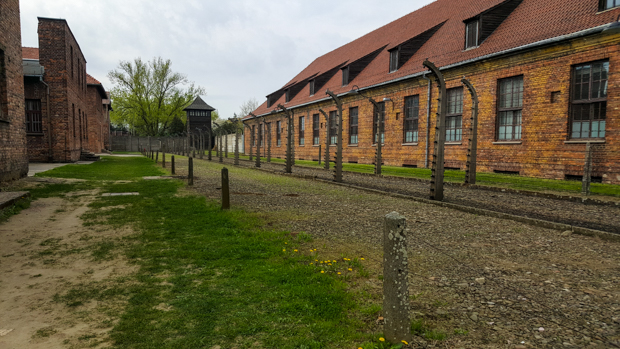 Most of the buildings within the barbed-wire boundaries housed prisoners. There was also an “infirmary” where experiments were performed on sick prisoners, identical twins, Jewish women who were forcibly sterilized, and more. It’s nauseating, what was done to these people.

The prisoner housing has been converted into a series of exhibitions. Each WWII occupied country has an exhibition that tells the story of its Jewish population during the war. It seemed like they were put together by their respective countries which I thought was cool. They all have different exhibit design styles, and you get to see history from different perspectives.

The most jarring displays are the ones showing the confiscated belongings, sorted by type. Glasses. Suitcases. Shoes. Pots and Pans. The shoes and the suitcases got to me the most. There was a corridor lined on both sides with piles of shoes. I can’t even venture a guess of how many there were, in every size and style and color. To think, every shoe in that display was once on someone’s foot. A human being’s foot. And then they were taken off, thrown into the pile, and that human was killed. Baby shoes. Mom and Dad shoes. Brother and sister shoes. Grandpa and Grandma shoes.

Then, the suitcases, each labeled with the owner’s name in white paint. Names make things feel real. You can stand there and read off name after name of these people who were just as real as you and me, people who took the time to pack their suitcases, thinking about what they might need to take with them. The shoes and the suitcases sent me into a downward spiral. I could have ended my day there, in a puddle of despair, mourning the state of the world, but I reminded myself that I had to keep going. I still had more to learn.

The prison block was rough too. The basement has cells designed for various punishments. Some are too small to sit down, others have no light, some were “starvation cells” (prisoners were given water to keep them alive until they starved, prolonging their suffering). One room has a memorial honoring (Saint) Maximilian Kolbe, a Polish priest who volunteered to take the place of a man randomly selected for death by starvation, as punishment for a prisoner who escaped. The man ended up surviving the war. A glimmer of light in the darkness.

Next to that building is the “wall of execution”. A sign outside of the courtyard says, “You are entering a courtyard where the SS murdered thousands of people. Please maintain silence here: remember their suffering and show respect for their memory.”

Thousands of people. Standing there, about where the executioner would have stood, I looked around and tried to imagine the scene. How can I picture something that is so far beyond my comprehension? The place looks nearly the same now as it did then, but the people, the sounds, and the circumstances are completely different. The rooms where people had to undress before their executions are right next to the courtyard. They knew exactly what awaited them outside. Try as I might, I couldn’t imagine being someone in that situation. I didn’t want to; it was too scary. They didn’t have a choice. 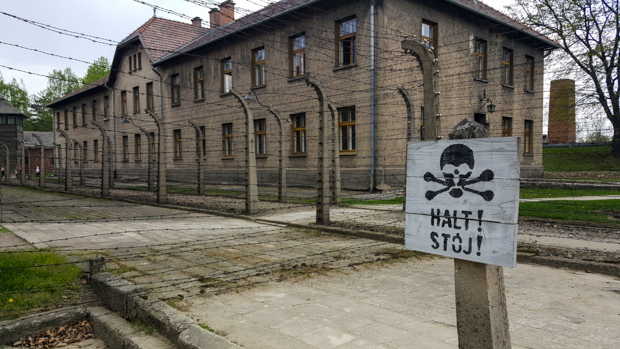 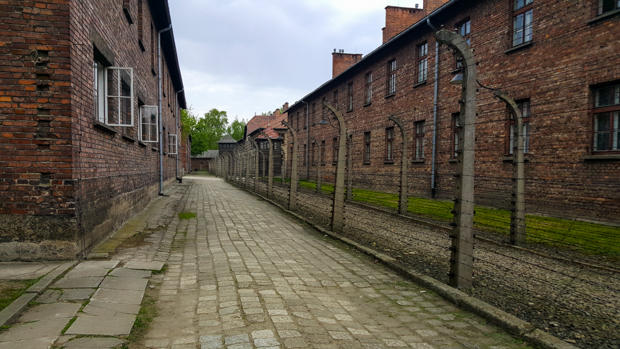 Auschwitz I had its own crematorium just outside the barbed wire fences. Then, “in the autumn of 1941, the largest room… was adapted for use as an improvised gas chamber, the first of its kind in Auschwitz… many thousands of Jews were murdered here by the SS within hours of their arrival at Auschwitz. Several groups of Soviet POWs were also murdered here in this way, as were sick prisoners whose return to work was considered unlikely. Poles from outside the camp who had been sentenced to death… were shot here”. In 1942, the first improvised gas chambers were created at Auschwitz II-Birkenau, and this one fell out of use. It’s a strange feeling, standing alone in a room that looks so ordinary and so empty and knowing that thousands of people were killed there.

After visiting the crematorium, I felt overloaded. I was ready to leave. I walked out of Auschwitz I unobstructed, past the “Arbeit macht frei” gate and out of this place that consumed thousands of people who were no guiltier than I.

I made my way to the bus stop to catch the next shuttle bus to Auschwitz II-Birkenau.