​I got to hang out with Sosane today!! She doesn’t have classes on Tuesdays, so she came down to London for the day to hang out with me! I met her at the train station, but first I went to buy another jacket because it’s seriously freezing here. I can’t believe that I was complaining about the heat two days ago…

Seeing Sosane in “normal life” was beyond weird. I think she didn’t even recognize me because it was the first time she’s ever seen me in non-athletic wear. In case you’re wondering if Ghana friendships can survive the transition back to our regular lives, the answer is yes! I know it’s crazy how fast we got close to one another. For example, my friendship with Sosane was pretty much built in two weeks. It’s real though. It’s not just a friendship of circumstance… like just because we were all there and didn’t have any other options, that’s why we spent time together and became “friends”. No, these people are awesome no matter the context, and I’m lucky to be able to call them my friends.

We grabbed lunch and spent some time catching up before heading to the Tate Modern, a modern art gallery. It’s another free London museum, and it’s located in an old power plant which is cool. The whole museum is massive… an addition was finished earlier this year to create more gallery space. The best part of the addition is a terrace on the top floor where you can walk all the way around the building and get 360 degree views of the city. It was cool to be able to see everything from that perspective. 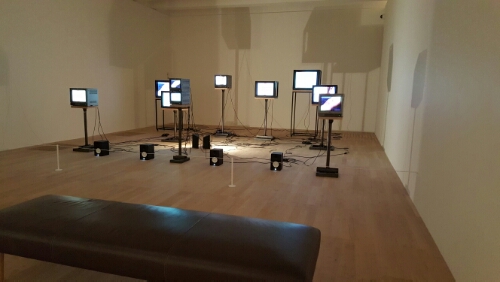 We probably spent most of our time at the museum on the terrace. Once we got inside, we could only tolerate so much modern art. Don’t get me wrong, I love art, and sometimes even modern art. There are other times though when everything is so weird that I can’t deal with it. I’m just glad that I went with a friend because then you can pretend you’re art experts and come up with interpretations of the exhibits. Everyone does that, right? Right?
Once we’d had enough, we drank hot chocolate and walked around the city until it was time for Sosane’s train home. We said a rushed goodbye in the underground as my train pulled up, and it felt like another “see you later” goodbye. Today just felt so normal… meeting up with a friend in the city and hanging out for the day… that I can’t believe it’s not. Anyway, I’m back on my own tomorrow, and I’d better get some planning done so I can make the most of the day.