​You know what I LOVE? Red eye flights! There’s nothing like getting 4-5 hours of EXTREMELY restful sleep on a plane and then having to function like a human (rather than a zombie) for an entire day.

My flight got into London Heathrow at 5:30AM, and from the moment I was woken up by our plane’s bumpy landing, I wanted to go back to sleep. No such luck. I spent some time in the airport bathroom, trying to pull myself together, before going to get my bags and start the journey through customs. Culture shock #1: I used tap water to brush my teeth (we couldn’t ingest tap or well water in Ghana… we only drank bottled/mineral water there!). Culture shock #2: I had to battle with the sink motion detectors in order to do it (motion detectors? Whattt?). Once I washed my face and brushed my teeth, I felt at least like a semi-human which was probably as good as it was going to get. Onward to customs!

Have you ever travelled alone? Before this, my only solo travel experience was a brief work trip to San Diego earlier this year. I considered that my test run for this whole trip. It’s kind of a weird feeling. You arrive in a new place, and there’s no one expecting you. There’s no one at the airport to meet you. You have to figure things out on your own. If I hadn’t let my parents know I landed safely, no one would have even known I was there (besides the British government but that doesn’t count). I felt a little nervous and excited all at the same time. Luckily, in London, it’s easy to get around because of the tube, so all I had to do to get from the airport to my hostel was follow the signs to the underground, put some money on a transit card, and hop on. Easy! (As soon as you’ve used the subway in one city, I’m convinced you can do it anywhere. They’re all basically the same.)

I think I might be a little paranoid because the entire time I was sitting on the tube, I thought that people were staring at me (this might be a carryover from 3 months of thinking that people were looking at me and it actually being true). My mind was screaming, “they know! They know!” Know what, you ask? I’m not sure. Know that I don’t belong? Yes, it doesn’t make sense, but that’s how I felt. It’s like I was an alien, trying to blend into a foreign planet (not that I know what that feels like, but let me imagine). So yeah… culture shock #3: everything.

I almost managed to convince the people at the hostel that I was normal until I asked if they had hot showers. They looked at me like I was, well, an alien, before saying “yes” but it sounded more like “duh is that really something you need to ask?” To be fair, probably no one has ever asked them that question before. Culture shock #4: readily available warm showers. With running water.

I dropped my stuff at the hostel and hit the streets. Before I did anything else though, I went and bought a scarf, hat, and gloves because HELLO cold weather. Geez. I forgot what it feels like to not be sweating constantly. Culture (not really culture but whatever) shock #5: seasons and cold weather. Anyway, enough about today’s culture shocks. The other thing about travelling alone is that you need to be self-motivated to see things and do things, otherwise you could spend all day sitting around. You have to make decisions. That’s not one of my strengths, so this is good practice for me!

The rest of the day was spent enjoying museums and the architecture of the city. An awesome thing about London is that the publicly funded national museums are free! My first stop was the National Gallery. The building is amazing, and it houses thousands of paintings. I obviously didn’t see them all, but I’m a big fan of more “modern” (as compared to like 15th century…) paintings and was sure to go through the entire 18th-20th century collection. The building was just as cool as the art, and I had fun exploring the different rooms. 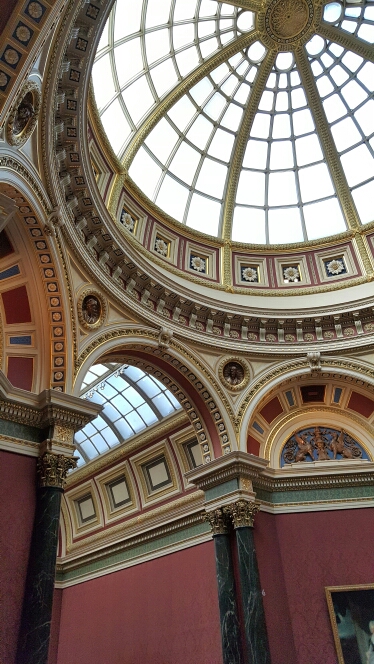 After that, I kept on the museum path. My next stop was the Victoria & Albert Museum, a decorative arts and design museum. They have a few different types of exhibits there, and my favorites were in the materials and techniques category. I could have spent hours looking at the glass, ironwork, and architecture sections alone, but I had a schedule to keep!

Right next door is the Natural History Museum, and in my opinion, the best part of that museum is the building. I did no prior research, so when I walked through the doors, I had no idea what to expect. The entrance hall is seriously magnificent. I’m not even going to try to describe it… you need to just look at the pictures.

My last stop of the day (I’m impressed that I was even still functioning at this point) was Westminster Abbey for the Evensong service. The best way to see a church is by going to a service, partly because then you can go for free, but mostly because then you can experience the building the way it was meant to be experienced. Churches were built to be used, and they’re even more beautiful when you see them in action. The Evensong service is great because it’s mostly singing which means you can really appreciate the acoustics. Plus, I don’t think it was as crowded as a Sunday service since they have one every night. I got there early enough to sit in the choir stalls! Those are the fancy looking seats in the area where the choir sits, right behind the choir benches… aka where the big shots sit. No big deal. I would have taken a picture to show you except that photography isn’t allowed inside the church (and I’m a rule follower). The service was beautiful, the choir was great, and the cathedral was freezing (seriously though… about halfway through I wrapped my scarf around myself like a blanket).

By the end, I was falling asleep in my seat. Between the angelic singing and my cuddly scarf, it was a losing battle. I picked up some dinner on my way back to the hostel, and after I take a too-long hot shower, I’m going to hibernate.