Our second day of exploring Delhi was… interesting. We unintentionally visited all of, what I have deemed, the most baffling places in the city. Our first stop was Akshardham temple. Andrew and Rohan had never been before, so it was a strange, new experience for all of us. There’s no entry fee, but they make up for that in over-the-top security measures and the fact that you can’t take pictures. I’ve never been through security like this.

First, you go through a guardhouse where they looked through your bag. Next, you come to a building where you have to hand in certain items. This is where it started getting funny. I tried to just give them my whole little purse minus my wallet because you have to hand in your phone, so what else do I even have in there? They rejected my purse but then told me to remove “all electronics”. Uhh. Okay? So I gave them the little external battery pack I had too, and I had to give them the cord, as if I could do anything with that after giving up my phone and the battery pack. Then I had to give him my headphones, and finally he asked for my hand sanitizer. What the heck am I going to do with either of those? But whatever. At this point, my purse was practically empty anyway, so I’m not really sure why they wouldn’t just take it.

The next step was security. You always get split into men and women here, so I went in the women’s line and walked through a questionably functional metal detector, had everything taken out of my bag again (though apparently the granola bar I had was no problem), and got the world’s least thorough pat down which did, however, include the woman asking me if the bump she felt from my pants drawstring was a phone. Likely. And finally, we were in.

None of us had done any real research on the place, so we just assumed that it was some old temple. I quickly started questioning that once we got into the complex. Everything looked too sharp. The carvings were crisp and perfect, and it didn’t feel old. When we entered the actual temple (shoe-less, of course), there was lighting integrated into the shrines, and it didn’t look like it was added in after construction. Suspicious. Rohan went and asked an employee when it was built… 2005. Hahahahahaha I literally burst out laughing. Here we are, thinking it’s some sacred piece of history, and it’s barely more than 10 years old. We kept joking and laughing about it throughout the day. That also explained why everything looked so fresh. Some of the carving was done by machines (so it amazingly only took 5 years to complete!), though the detail work was done by hand, and there hasn’t been nearly enough time for it to start showing any wear and tear.

The building is beautiful, and I’m glad we went, but how funny is that? It’s supposed to celebrate and showcase India’s architectural history, so I guess I have to say, “good job,” to the designers. You fooled us!

Inside the temple, we also learned about Swaminarayan, an important figure in modern Hinduism. His followers believe that he was a physical manifestation of God. He did a lot of good things for women in India, including advocating for women’s education, discouraging the killing of female babies, and speaking against the ill-treatment of women. The temple is dedicated to him and contains an exhibit that includes impressions of his feet, and… wait for it… actual hair and nail clippings! Yeah, that’s too much for me I think. Can you imagine being such a big deal that someone would want your nail clippings?

Okay wow I managed to say a lot more about the temple that I expected. The next stop after that was Gandhi Smriti, the place where Gandhi was assassinated. There is now a Gandhi museum on the site as well, and that’s near the top of the list of the weirdest museums I’ve ever been to. It has a “multimedia exhibit” with LOTS of multimedia elements and no explanations of anything. There’s nothing saying what anything is, how it works, or why it’s significant. There was a woman following us around and pointing us in the direction of the next room throughout our visit, so I guess she was our unofficial guide. The whole thing was just baffling. There was one room with all of these little wooden boxes on the walls, and one wall of boxes contained little screens that were playing footage from one of Gandhi’s marches. Why the boxes? I felt like I was in some weird alternate reality.

The multimedia exhibit was strange, but there was also a helpful and informative exhibit of dioramas that gave a good timeline of Gandhi’s life. Filled with new Gandhi knowledge, we walked around the gardens and saw the spot where he was shot during an evening prayer ceremony. It’s an eerie juxtaposition of a horrible history and a peaceful garden. 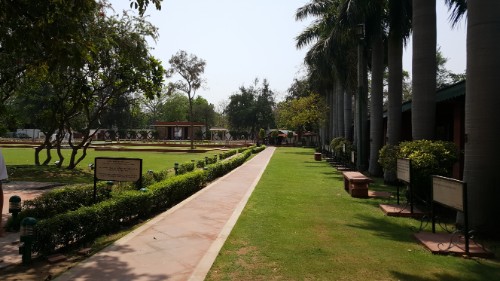