Sarah and I are basically public transportation pros now. We’re all about economical travel which means things are never easy or straightforward and always weird and memorable. The goal of the day was to make it to Khor Virap, a monastery about 30km south of Yerevan. The trek started with a walk from our apartment to Republic Square (the central square in the city) to catch the metro.

The metro here was built when Armenia was part of the Soviet Union. Cities with at least 1 million residents were granted a subway, so even though a population of that size wasn’t in the original plan for Yerevan, the quota was reached, and a subway was built. There’s only one metro line and the route is kind of random, but if you’re starting and ending somewhere close to the line, it’s actually very nice. The stations are way cleaner than any other subway I’ve ever been in. A ride costs 100 drams (about 20 cents), and to pay your fare, you buy these little plastic tokens that look like someone cut them out of a sheet of plastic using safety scissors.

Our metro ride was uneventful, and we made it to the bus station quickly and without any trouble. The next part of the trip was taking a marshrutka (that’s the Russian word for it… I’m sure there’s an Armenian word too, but this is the one that I’ve heard used) which is basically the exact same thing as tro tros in Ghana and combis in Peru. They’re minibuses that (generally) look like they’ve seen MANY better days, and everyone packs in like sardines. I wouldn’t recommend it to anyone with a strong need for personal space.

It was easy enough finding the right one to take. I let Sarah think that my Armenian reading skills were really good, but actually the sign also said “Khor Virap” in Latin letters too. Shh, don’t give away my secrets. Actually though, I can read at least well enough to make sure we’re going the right way. I didn’t realize how big of a help that was going to be.

The bus left exactly on schedule which impressed me. Is “Armenian time” just an excuse that people use in the States to justify being late, but it’s actually not a thing in Armenia? Or maybe the public transportation is just on point here. I’ll have to get back to you on this.

We made it to Khor Virap in maybe 40 minutes, and the driver took us all the way to the parking lot even though the route is supposed to leave you off about 1.5 km away. That was fine with me! He saved us 20 minutes of walking each way, and we used that time for extra adventures. The first stop though, obviously, was the monastery. There are two reasons why this monastery is extra cool. Reason #1: you get an awesome view of Mount Ararat. Reason #2: legend has it that St. Gregory the Illuminator was imprisoned by the king for 13 years in a “dungeon” (aka a creepy underground room or a “khor virap” – a “deep well”) in the monastery. He was left there to die and was even forgotten by the king, but he was fed and kept alive by a woman from a neighboring village (I’ve heard this a couple ways though… one is that it was one woman under the influence of a strange dream that compelled her to bring him food. The other is that it was a few Christian women who secretly fed him. The length of the imprisonment also seems to be up for a bit of debate with some sources saying it was only 13 months, not years, but we’ll go with years because that’s a better story).

Eventually St. Gregory was freed when the king went mad, and his sister had a dream that St. Gregory could cure him. And that is how this story goes from being just about St. Gregory to being the story of how Armenia became the first country to declare Christianity the state religion in 301 A.D. If you know any Armenians, then you know how proud everyone is of that fact, which by association makes Khor Virap kind of a big deal. Wow. Sorry, that story ended up being much longer than planned (and I cut out a LOT of details, trust me). Anyway, the takeaway from this is that Armenian legends are great, and who knows what’s true and what’s not quite. I’m going to count them all as completely factual because that’s way more fun. 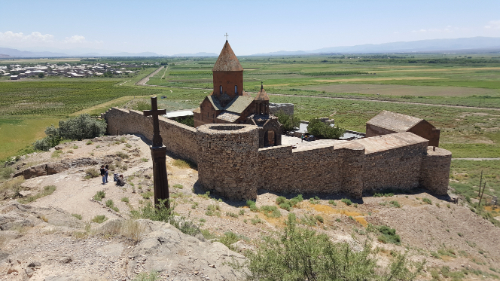 After exploring all of the nooks and crannies of Khor Virap, we still had some time before our return bus. We headed out on a pilgrimage to a statue of Gevorg Chaush, a guy who I think would be best described as a freedom fighter (correct me if I’m wrong). We thought it was funny that there’s a statue of him basically in the middle of nowhere, so we made the trek out to give him a little company.

Thankfully, we made it back just in time to catch the bus which was, once again, EXACTLY on time. Incredible. We got back to Yerevan and spent some time at the Armenian History Museum. Here’s the quick summary: The Armenians have been around for practically forever (they say that there’s been a geographical region called Armenia for 2600 years). There’s a LOT of history to go through. You can see the oldest shoe in the world that’s dated back to about 3500 BC (that’s even older than the pyramids, Stonehenge, and the ice man). If you go, you should do the tour because there’s so much to look at, and if you try to understand it all on your own, your head will explode. Even with the tour, your head might explode. Sarah and I are filled with a whole lot of Armenian history knowledge now.

We also visited Vernissage, a big souvenir market, and went back to Republic Square at night to see the fountain music/light show. I won’t say too much about that except that it’s awesome. And then we came home and passed out.