One of the must-visit spots in Yerevan is the Armenian Genocide Memorial and Museum (Tsitsernakaberd), and Sarah and I wanted to be sure that we would have as much time as we needed there. It opens at 11AM, and we were there at 10:45, taking advantage of the nonexistent crowds and visiting the memorial first.

The memorial is very well done. There are three main parts: the memorial wall, the eternal flame, and the stele (I’m sure there are official names for these parts, but I don’t know them). As you approach the memorial, there is a 100m long wall with engravings of the town names where massacres took place. The eternal flame is housed in a memorial hall where the floor is 1.5 meters lower than the surrounding walkway, representing the 1.5 million Armenian victims. The area is semi-enclosed by 12 huge concrete slabs that slant in and up, representing the 12 lost provinces that are in modern-day Turkey. The tall stele symbolizes the Armenians’ survival and spiritual rebirth. It is partially split into two parts, expressing the unity of the Armenian people despite their physical separation/dispersion.

It looks beautiful from a distance, and everything was so deliberately done. Sarah observed that the concrete slabs made you feel a certain heaviness when standing in the hall with the eternal flame, and I definitely agree with her. It’s a space that almost forces emotion and reflection. Who knows what exactly the designers were aiming for, but I’d say they did their job well.

There’s also a museum that gives a VERY thorough timeline of the repeated persecution of the Armenian people, starting in the 1870s and extending through the 1920s. I knew a good amount of the information presented there, but getting all of it in such a detailed, chronological format was really helpful. I’m going to do my very best to summarize while also doing the story justice, but I’d obviously recommend going to the museum if you ever get the chance because they do it 1,000x better than I ever could (which, whether you’re Armenian or not, come to Armenia for vacation! Sarah will be the first to tell you that you should).

1915 is the year that people think of as the beginning of the genocide, but that wasn’t the beginning of the Armenians’ problems. Minority groups in the Ottoman Empire, Christians included, had limited rights (there were even restrictions on what they could wear!) and high taxes. The 1876 Ottoman Constitution supposedly guaranteed some rights, but even that wasn’t followed. Even so, the Armenians thrived during this period and were successful in business and education. During the negotiation talks for the 1878 Treaty of Berlin, Armenians pushed to make their struggles known to the Western powers, and an article was put into the treaty saying that they should be treated differently but not including any real way to confirm that it actually happened.

The sultan ordered the first round of massacres to take place in 1894-1896. The thought was that if there were no Armenians left, then no reforms were necessary. It was a convenient answer to the “Armenian Question”. About 300,000 Armenians were killed during this period, and many more were converted or moved. Any efforts made to get fair rights were met with aggression. 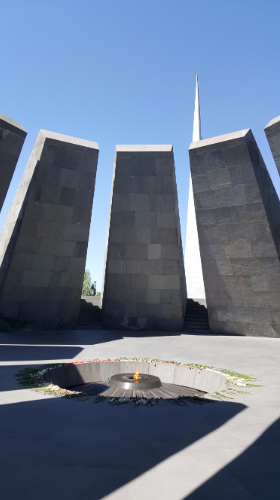 When the Young Turk party started, it called for freedom, equality, and justice, and many Armenians supported the movement, thinking that it would be better than the current government. Those policies were soon abandoned, and a “Turkification” movement started with the goal of taking back the Turkish homeland. In 1909, there was another round of massacres in Adana. Armenians were disarmed, their houses were marked, and Turkish civilians and criminals were given weapons and set free.

Elsewhere during this time, Armenians were gradually being scapegoated, accused of treason, and turned into the enemy in the eyes of the public. The government waited for an opportunity to move into the next phase of the plan and then World War I came. The Ottoman Empire joined sides with Germany under the agreement that their eastern border could be expanded. 60,000 Armenian soldiers were drafted, blamed for a battle loss, and put into labor battalions that were starved or killed once they were no longer needed.

On April 24, 1915, 235 Armenian intellectuals were arrested in Constantinople, based on a previously compiled list. That number eventually grew to 800 leaders in the Armenian community who were imprisoned. Political leaders and members of the clergy were killed. The property that all of these people left behind was considered “abandoned” and was confiscated by the government.

After these two phases, the military-age men and national elite were out of the way, leaving mostly women, children, and the elderly. Mass deportations were organized. Any remaining men were usually killed first, and the rest were “spared” to embark on grueling marches through the desert where starvation, planned attacks, and kidnappings were the norm. There were group drownings, burnings, forced jumps from cliffs and bridges, and medical experiments. Those who survived went to concentration camps in the desert where many succumbed to infection or starvation. 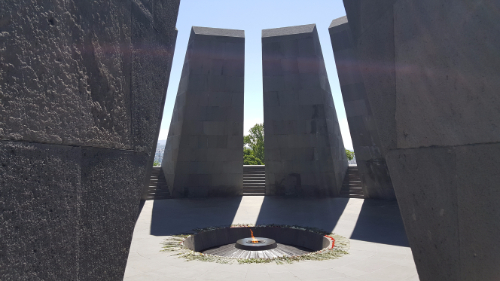 On May 24, 1915, Great Britain, France, and Russia issued a joint declaration condemning the massacres and holding the Turkish government responsible, but it didn’t change a thing. It wasn’t until the end of WW1 that much of this was stopped. The government officials involved were tried and convicted, but after that, they were freed in exchange for the release of British POWs. Even after all of this happened, in 1922, Armenians and Greeks in Smyrna were killed in masses, and the city was burned to the ground. That same year, Armenia became part of the USSR.

To this day, the Turkish government denies that the massacres were genocide. Armenians are scattered across the globe, and the size of Armenia is a tiny fraction of what it once was. The museum ended on a positive note though, talking a bit about the people who helped to recover orphans who had been taken to be “Turkified” and rescue kidnapped women. It was a good reminder that even in the face of so much evil, there are incredible, selfless people who will step up and risk their own well-being to help others.

Like I said before, the memorial and museum were very well done. We left feeling a bit sad but mostly hopeful and extremely well-informed. The amount of information and materials gathered there is amazing!