Remember when I said that economical travel leads to a lot of weird and memorable experiences? Well, our trip to Lake Sevan was definitely both of those things. I don’t know how to explain it besides just telling the whole story, so here it goes…

Lake Sevan is the largest body of water in Armenia, and it’s a popular summer beach destination. It’s at a very high altitude so the water is frigid, but supposedly it warms up a bit over the summer and becomes pleasant in July and August. The lake used to be even bigger and deeper than it is now, but it was used for irrigation and hydroelectric power when Armenia was part of the USSR which caused the water level to drop by almost 20 meters! There’s a monastery, Sevanavank, that is located on a peninsula, but it used to be on an island! They realized that this change in water level was starting to destroy the lake and its wildlife, so now they’re trying to bring it back up and have created tunnels from a couple different rivers to bring more water into the lake. Since they started, the water level has increased over 5 meters! That seems pretty good to me (I don’t know anything about this topic though, so who knows?).

Our plan was to go to the lake, visit a couple of monasteries and a cemetery, and go for a swim. Sarah was determined to dunk her head saying, “it can’t be colder than the water in Maine.” That logic made no sense to me… just because colder water exists somewhere in the world doesn’t change the fact that I have no interest in fully submerging in a freezing cold lake.

To get there, we took a city bus to one of the many inter-city bus stations in town. From there, we got a marshrutka to Sevan, a town on the lake. We were going to walk to the first monastery because it’s only about 3km from the town and then hopefully barter ourselves into a good deal for a cab to the other monastery and the cemetery (because bartering is super easy when you’re as fluent in Armenian as I am *internet sarcasm*).

That’s how we found ourselves walking down the random little road, surrounded by nothing, where the real story starts. Sarah was grumbling about how the monastery looked farther than 3km away (and I was definitely thinking it, though I was the one who came up with that distance, so I never would have admitted it) when a car pulled up next to us. It was the first car we had seen since turning onto the road, and when the driver offered us a ride, we enthusiastically accepted.

There were three people in the car: the driver and an older couple who were clearly coming back from grocery shopping. We assumed they were all related, but the driver dropped off the couple and kept going. Oh yeah, and no one in the car spoke English which meant that any communication depended on hand motions and the six words of Armenian that I know. We figured that he’d drop us off at the main road and we’d walk the rest of the way, but I’m sure we accidentally agreed to something along the way and instead ended up at a restaurant on the beach. He obviously knew everyone there, and the woman who owned the place quickly brought out cokes, bread, cheese, apricots, wine, bubbly water (Jermuk), coffee, and salad for us. Sarah and I exchanged a “what the heck is happening?” look and decided to go with it while simultaneously trying to figure out a way to get to Sevanavank as planned.

Before we could even think about eating, Souren’s (our new best friend) son showed up on a jet ski, and Souren decided that Sarah and I needed to go for a ride. That’s on my bucket list anyway, so I said okay (and because I don’t think that “no” was an acceptable answer), and he took us out one at a time for a quick ride on the lake. It was pretty awesome actually, and for the record, the water is still VERY cold.

We got back inside and told Souren that we had to get going because we wanted to see Sevanavank, and we had a limited amount of time before the last bus back to Yerevan. Keep in mind that I’m saying “we told Souren”, but what I mean is “we attempted to express, through a series of elaborate charades and hand motions and a few mildly helpful Armenian words”. Communication is a funny thing. Finally, it seemed like we were on the same page, and off we went again (after trying to leave some money for the food and being refused).

Instead of taking us straight to Sevanavank (or letting us just walk the rest of the way), Souren first took us to a church with a nice view of the lake where we lit prayer candles, drank cold spring water, and each left with a huge bouquet of flowers. Finally, our next stop was Sevanavank!

Souren clearly wasn’t planning on just dropping us and leaving, so off the three of us went, up the stairs to the monastery. Even if we’d had to walk the entire way there, trust me, it would have been worth it. The views of the lake were amazing, and the monastery looked like it belonged there. I think it made the lake look even better. Check out the pictures and tell me if you don’t agree, but I’m becoming a monastery addict (which is good because there are a LOT of them across the country). 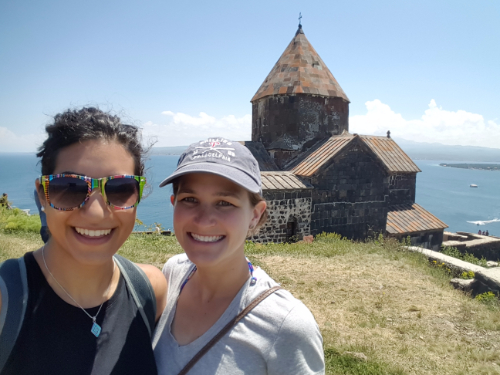 We figured that there was no chance of us making it to anything else we had planned, so we told Souren we were just going back to Sevan to get the marshrutka to Yerevan. Before taking us to the station, we stopped by his house, and his daughter yelled out the window for us to come up for a bit before leaving. How do you say no to that? I don’t know that you can, so we said yes, and that’s how we found ourselves in Souren’s living room being force-fed apricots and soorj (Armenian coffee). I’m not a huge apricot fan, but I ate a couple anyway. I’m DEFINTELY not a coffee fan, and soorj is possibly the grossest thing I’ve ever tasted. I seriously couldn’t even begin to describe it so that you could fully understand, but it’s something like drinking mud. I don’t know if you might enjoy it if you like coffee, but I think even American coffee has too strong of a taste, and soorj is like if you ran that coffee through the coffee machine 100 times until the water was fully saturated with coffee taste. When you finish, there’s still a sludge left at the bottom of your cup, and that means that they made it RIGHT. I can’t handle it.

Despite the best efforts of Souren and his wife to convince us to stay the night (remember that this is all happening in Armenian and hand motions), we stayed firm in saying that we had to head back to Yerevan. Their daughter and her boyfriend were also going to Yerevan, so Souren drove the four of us to the marshrutka station. He gave us parting gifts of moonstone from Lake Sevan, as if he hadn’t already done enough to welcome us, and set us on the marshrutka with big hugs and enthusiastic kisses on the cheek.

On the ride back to Yerevan, Sarah and I were just dazed. To say that things didn’t quite go according to plan would be an understatement. We rode on a jet ski. We drank mud coffee. We met the entire family of a guy who picked us up off the side of a dirt road. We went to a tiny church tucked up in the mountainside and left with massive flower bouquets. We collectively spoke maybe 50 words during the entire day that both parties understood, and yet, that didn’t seem to matter at all. Maybe it wasn’t what we planned, but I don’t think either of us would go back and do things differently. The unplanned was SO much better.