With a limited time left in Gyumri, we have been trying to do things around the city on the weekends so that we don’t feel like we’ve missed out on things when it’s time to move to Yerevan. A couple weekends ago (I know, I’ve been horrible at keeping up to date), Shant and I decided to cross off a few of our Gyumri bucket list items: Mother Armenia and the Sev Berd (Black Fortress).

You might remember that Yerevan has a Mother Armenia statue as well… it seems like that’s the thing to do here. Find a hill near the city, make a huge statue of a hardcore looking woman, and put her on a towering pedestal. This one was erected in 1975, and from the looks of it, no maintenance work has been done on it since then. Okay, that’s a bit of an exaggeration, but the whole area could definitely benefit from a little love. And cleaning. And weeding.

The Sev Berd was built by the Russians in the late 1830s. It was never attacked, and today, it’s privately owned and used as a venue for different events. I know there have at least been concerts there, but I’m not sure about what else they do.

Shant and I walked from GTC and instead of taking the very clear, normal person path to get there, we followed the road for part of the way and then turned off onto a “path” (aka the grass was kind of flattened down) that looked like it was going in the right direction. It… kind of worked. I mean, we walked through some people’s yards (but that’s not so weird here) and blazed our own trails through some underbrush, but we made it there in the end so that’s counted as a success, right?

We went to the Sev Berd first and took another slightly questionable path to get there. Were we trespassing? Who knows. Was the security guard very surprised to see us leaving after not seeing us come in that way? Yes. Did anyone give us a hard time about it? Nope, and that’s all that matters. I really wanted to go inside, but Shant and I are pathetic and didn’t want to go through the struggle of trying to speak Armenian. I know, I know, but there are some days when you’re willing to put in the effort and other days when you just can’t. That was a “can’t” kind of day. Some other (Armenian-speaking) volunteers went a different day and talked themselves into an impromptu tour of the inside, so I guess my punishment is having to live with that.

From there, we walked over to Mayr Hayastan (Mother Armenia) and took a lap before heading back into the city. Both things were interesting, but visiting Mayr Hayastan was a bit of a bummer because it was in such a sad state. There are all of these fountains/water features leading up to the statue, and it could be a really cool place to visit if it was kept up. Instead, like so many other things in Gyumri, you can see the former glory and present sadness of the city. It really makes me wonder what Gyumri used to be like, back in the days before the earthquake.

The next day, Shant, Carineh, and I went back to Sarnaghpyur, the village we visited my very first week here, to hang out with Karen in his natural habitat. He promised us a food and adventure-filled day, and it definitely didn’t disappoint. 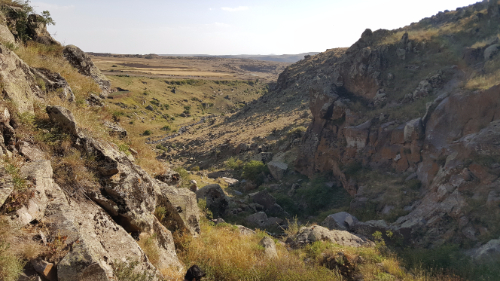 We got there early in the morning and were treated to a breakfast of pancakes, hard-boiled eggs, bread, cheese, fruit, etc etc etc just imagine every food in the universe and it was probably there. After breakfast, we had ice cream and then hung out until lunch when we ate AGAIN. Very productive day so far, I know. I felt like my stomach was going to explode (which is pretty typical here, to be fair), and still I was being guilted into eating more. Ahhhh peer pressure!

Force feeding aside, it was fun getting to see Karen in his natural habitat. I love seeing how different and at ease people are when you put them in the places where they feel the most comfortable. It’s like you have the chance to peek inside their souls and see the real them.

We finally decided to mobilize after lunch and go on a hike in the nearby area. The dinner food (because obviously we needed to eat AGAIN) was packed up, firewood chopped, and everyone got ready for an adventure. Karen led us through a canyon where we got to climb some rocks and strategize the best route to take. That’s one of my favorite kinds of hiking because it’s not just walking up a hill. It requires some thinking and planning and challenging yourself.

The best part of the hike was this one place where we found the coolest cave. There was a big cave with a bunch of other little caves and passageways inside. I obviously had to climb into as many of the holes as possible because I love holes. This is one of my Armenia-acquired most favorite hobbies (one of the others is discovering more Armenian invention claims… I’ll probably have to do a second post on those because I have a few new gems to share). 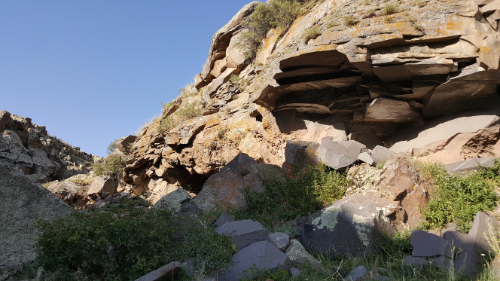 From there, we made our way to a little picnic area to hang out and eat dinner. Armenia has the most randomly but conveniently located picnic tables I’ve ever seen. Anytime we’re out on some random adventure and decide that we want to stop for a snack, there’s a picnic table waiting for us. I don’t completely understand this phenomenon, but it’s one that I choose not to question. In typical Armenian fashion, the dinner plan was khorovats (barbecue). We had eggplants, peppers, tomatoes, and pork, Karen and Shant grilled it all over the fire, and we ate it with lavash (soft, flat Armenian bread).

By the time dinner was finished cooking, it was pitch dark outside. Like not even a little moonlight to help us out. We ate by phone-light, and Karen called for reinforcements so that we didn’t have to walk all the way back to his house. His uncle drove as close to us as he could, and we trekked through the dark with his headlights as our guide. It was like the Armenia version of a helicopter rescue from the wilderness. I was completely exhausted and passed out the instant we got in the car. That’s how you know it was a good day!