In general, my friends and I aren’t very big on going to the planned Birthright excursions. They happen every weekend, but since I’ve been here, I’ve only been on two… make that three with the one I’m going to talk about now. In general, the excursions never run on schedule, there are too many people, and we usually want to do something more adventurous than whatever they have planned. We made an exception this weekend because the excursion description mentioned hiking and because we had heard that the destination, Lastiver, was super cool.

Lastiver part of a wildlife preserve, Ijevan State Reserve, in the north-ish eastern part of the country. There’s a river with a bunch of little waterfalls, caves, and best of all, trees. We have gone on so many hikes since I’ve been here, and every time, it’s like we’re wandering through the desert. Zero trees, zero shade, zero shelter from the meltingly hot sun. I’m a forest kind of person… forests and mountains, and even better, forested mountains.

Well, I was in luck with this hike. Almost the entire thing was through the trees and nice and shady. It felt a little bit like I was back at home which was comforting because sometimes it’s just nice to see something familiar. The end point was a campground by the river, and by “campground” I mean that they have these little cabins that you can stay in overnight and it’s really not very rustic at all.

When we got there, the announcement was made that we had an hour to swim or hang out until lunch was ready. I, of course, wanted to spend my time exploring. The water was FRIGID which means I wasn’t too interested in swimming, so I started walking upstream. Clearly, my friends and I are all on the same page because Shant and Carineh were right there with me, doing the same thing even though we hadn’t talked about it. We got a little farther upstream and found some of our other friends, Karen, Gagik, and his cousin, Anjela. I thought it was pretty funny how all of my favorite people ended up in the same place without any plans. I guess that’s how you know that you have things in common!

The upstream “hike” we ended up doing is probably one of my favorite things I’ve done so far in Armenia. It was another one of those fun, brain challenge hikes because there was a river and a bunch of rocks, and I wasn’t interested in getting wet. That meant that we had to be creative and do a lot of jumping from rock to rock. Our group got split up as Karen, Carineh, Gagik, and Anjela gave up on staying dry and started wading through the river, and Shant and I kept hopping from place to place. Ahh it was so fun.

One of my favorite feelings is when I’ve been consistently exercising and I feel like I have good control of my body, like balance and coordination-wise, and I get to do something that puts those to the test. This experience was definitely a balance and coordination challenge, but I felt like I was in control and could trust my legs to do what they were supposed to do. I was jumping from rock to rock without getting tired or worrying for a second that I was misjudging the distances or that I wasn’t capable of making it. I don’t know how else to describe that feeling besides just saying that it’s awesome, and you feel like your body is doing what it was made to do. 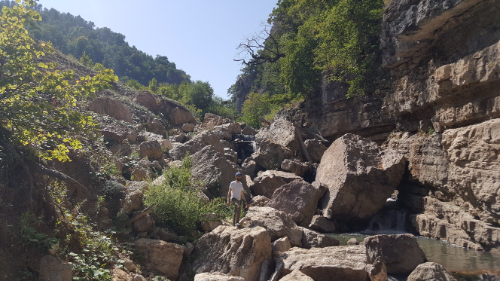 Anyway, by the time we decided to turn around and go back, lunch was long over. We made it back to the group, and I felt like we were castaways making it back to civilization. Who knows what everyone else spent their day doing, but I’m convinced that ours was the best.

The next day, Shant and I decided to make the trek out to see the Marmashen, a group of churches about 10 kilometers from where we live in Gyumri. There were originally five churches, only three are still standing, and they haven’t even found the foundations of the last one. I successfully called a taxi to take us there, and we spent some time wandering around, checking out the sights, and eating snacks (obviously, because we never go anywhere without snacks). It seemed like a cool place for locals because there was a picnic area, and people were going hard with their barbecue. After we were finished wandering, Shant really wanted to walk back to Gyumri, so off we went.

I know, I know this all sounds ridiculous. I’m convinced that we’re (“we” being my friend group here) literally incapable as a group of doing anything in a normal way. At Lastiver, literally no one else from the Birthright group walked so far upstream. All of us were just naturally drawn to it. Here, who in their right mind decides to walk 10 km home when you could just call a taxi? I guess that means we aren’t quite in our right minds.

To make things more ridiculous, we decided to ignore all of the roads. Instead, we took random paths through the fields that looked like they were leading in the right direction. I wish I had some sort of fitness tracker or something because I promise you that we walked FAR more than 10 kilometers while trying to take “the most direct route”. Ha.

Our wanderings took us through some cow pastures and old ruins that looked like one of our archaeology sites, over a river, into the village of Marmashen (where people looked at us like we were actual space aliens), and out into some fields. There, we were summoned by a random farmer named Hamlet. He spoke no English, of course, and so we entered into the usual conversation of hand motions and sporadic Armenian words. He wanted us to come back to his house to eat dinner and spend the night. When we told him that we were walking to Gyumri and had come from Marmashen the church (it’s not that close to the town), he looked at us like we were literally insane and offered to call his friend who has a car to take us home. People usually don’t understand walking somewhere just for the sake of walking. We finally managed to pull ourselves away, and off we went, back into the fields.

The rest of the walk was interesting. There are a bunch of abandoned, half-collapsed buildings outside of Gyumri. I thought that they were from the earthquake, but apparently maybe they’re from after? I don’t know, either way, they’re super eerie. Then, there are buildings that seem like they should be abandoned, but upon closer inspection, there are people living in them. We walked briskly by those. Then, there are the massive craters in the ground where there used to be a building and now there’s just a foundation. I don’t know what everything out there is from, but it was certainly an interesting walk.

We made it back to our neighborhood just as it was getting too dark to see anything. Thank goodness because I was starting to panic a little bit. Since we didn’t follow any roads, if it got dark before we made it home, we would have taken forever. We got ice cream to celebrate our survival, and ice cream fixes all problems, so now I have nothing but happy memories of the day. No, but actually, it was really fun, and I think that I can safely say that no one has EVER had a Marmashen experience like ours (because seriously… who walks??).