My first weekend in Yerevan, I decided to go on the Birthright excursion because the description said hiking, and the location seemed too far out of the way for us to easily get there on our own. The trip was to Smbataberd, a fortress in the Vayots Dzor Province. That’s south of Yerevan by a couple of hours and is right at the beginning of the skinny tail of Armenia.

Here’s your history lesson of the day: The first mention of the fortress came in the 5th century when it was used in the Vardanak War. They think (“they” being whatever people study and come up with these things) that it was built up much more in the 9th and 10th centuries when it was used by the Syunik princes. Unlike a lot of the fortresses we’ve visited here, this one actually saw a lot of action throughout history. They think that it was involved in some attacks again during the 11th century, built up even more and attacked again in the 13th century, and finally was abandoned in the 17th. Who knows how much of that is accurate, but it’s probably safe to conclude that it’s old and has had its ups and downs through the years.

I had no idea what to expect and was pleasantly surprised. I had never heard of this fortress before, and after being there, I would say that it’s waaay underrated. To start, it was much bigger than I expected. The walls enclose an area of about 65,000 square meters and are around 2-3 meters thick and 10 meters high. There are a bunch of round guard towers along the walls, and everything on the exterior is in decently good shape, especially considering the age of the ruins. They’ve done some preservation work, pouring concrete on the tops of the walls to keep them from crumbling further and making it possible to walk on them. I thought the whole thing was super cool.

Most of the interior buildings are much worse off. You can still make out their ruins though, and the keep is kind of intact. Even without the fortress being awesome, the views of the surrounding mountains and valleys are worth the trip. I seriously don’t know why more people don’t go there.

We walked up and it took a couple of hours, but I think it would have gone pretty quickly with a smaller group. Also, there are tire tracks that lead all the way to the top, so with the right car (or with a normal car and an Armenian driving it), you could easily drive there. It gets a strong recommendation from me! You would definitely need a private car to take you there because it’s not super close to any public transit routes (at least not that I could find… which means nothing because Armenia public transit and the internet have a complicated relationship), but like I said, I thought it was great. Honestly, it’s probably one of my favorite places I’ve visited so far in Armenia. 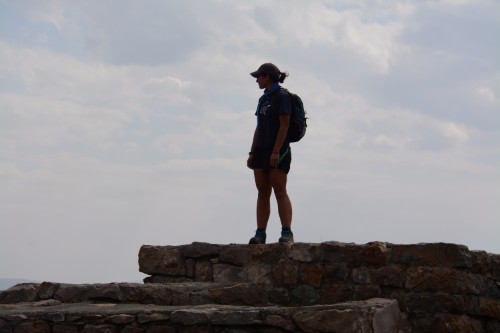