I think they got their metros from Japan or something. They’re the same ones that they have in Hong Kong, if I’m not mistaken. They’re all automatically driven and perfectly line up with the glass doors on the platform every time. They are almost impeccably on schedule and can get VERY crowded (that has nothing to do with where the metros were made, it just seems to be a theme everywhere). Like I said in my Dubai intro post, the public transit has optional designated seating for women that I wasn’t going to use until I realized that I was the only woman on the platform NOT in front of the women’s car. When it came and we all packed in, I was happy with my decision.

I took the metro to one of the stops near Dubai Marina. Then, a bunch of people were running to catch a tram that was coming, and I remembered from the transit map that one of the stops was Marina Mall which is exactly where I needed to go. What I didn’t realize was that the tram does a loop from the stop I was at, and the mall is the last stop on that loop, not the first. Oops.

I planned to take a ferry from the marina to the “old” part of Dubai. Due to my unexpected detour, I got to the ferry terminal at about 11:02, and the ferry left at 11. It was pulling out just as I walked up. I’m blessed with very good luck disguised as bad luck, though, because every time I think something has gone wrong, I end up being better off than if it had gone “right”. Okay, so I missed the first ferry, but the next one was in just two hours.

There’s a promenade that runs right next to the water, so I strolled along that for a bit and took in the sights. I spent a little more time sitting on a bench, soaking in the sun and warm air, watching people walk, run, and bike by, and wondering what brought each of them to Dubai. 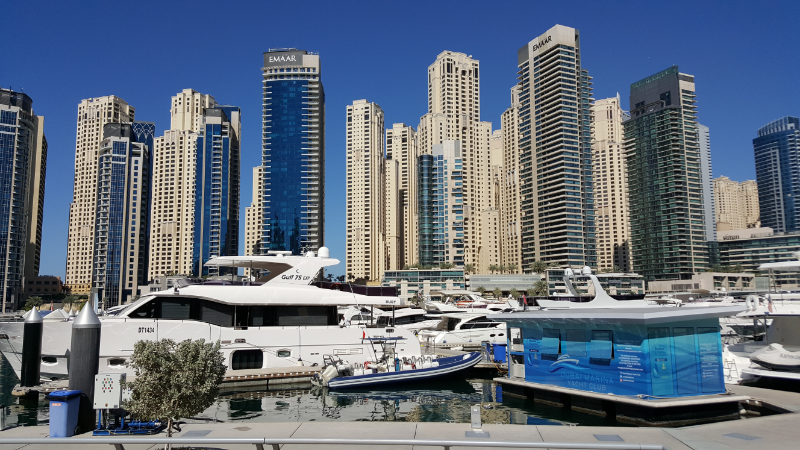 My extra hours at the marina flew by. Before I knew it, it was time to go and buy my ferry ticket! Based on the information I found online, the ferry was supposed to take 60-90 minutes. Ha. The route was a little different than anticipated, and it ended up taking TWO hours! I was excited because we went around one of the palm islands which is something I wasn’t expecting to get to see. Maybe other people would have chosen to spend their day differently, but I thought it was great! It only cost 50 dirhams (about $14), and I got to be on a boat in Dubai which kind of just felt right since boats are such a big part of the identity of the city.

When we finally landed, I was right in the middle of the things I wanted to see next. I was worried that I wasn’t going to have enough time to see everything based on my time estimates, but you know what? It worked out perfectly. I made it to everything on my list, and I didn’t feel the least bit rushed. I actually don’t know what I would have done if I’d had all the time I planned. It would have been way too much!

First, I strolled around Heritage Village. I didn’t realize at the time that it’s currently closed for renovations, so nothing much was going on. It’s a rebuilt neighborhood that is supposed to show “the traditional lifestyle” with demonstrations of the customs, traditions, professions, and craftsmanship of old Dubai. It has a mix of different building types to show building traditions across the different parts of the emirate. That probably would have been cool to see, but instead, I just wandered a bit and looked at the buildings.

My next destination was Al Fahidi neighborhood. This and Heritage Village are right along Dubai Creek, where the oldest settlements in the area were located. Apparently, they wanted to tear the neighborhood down and develop it, but people fought to preserve the history there. The result was that they didn’t build big buildings… but it’s still been developed. It feels like something straight out of Disney. A brand new historic village. It was still interesting, but I was a little disappointed, to be honest.

After I’d had enough of that, I went to the Dubai Museum. I was ready to be slightly disappointed again since the last two things I planned to see were such bummers. If the museum was a similar failure, I was going to be left with all sorts of extra time.

Thankfully, it was much better. It’s in an old fort, Al Fahidi Fort, and that building actually looks like it was preserved instead of rebuilt. The walls aren’t perfectly finished and fresh looking. I mean, I’m sure they did plenty of work on it, but it was at least less obvious and fake looking.

The museum itself was fairly well-done. In a few parts, there was so much information that it was actually exhausting (and I have a high tolerance for museums), but otherwise, it was good. There were also parts where the text was so small that I literally couldn’t read it from the distance I was required to stand at. By about the halfway point, no one besides me was even attempting to read anything anymore. Everyone else was just trying to get through it as fast as they could manage.

I thought it was really interesting because it talked about the history of Dubai and of the UAE in general. I haven’t been to many countries in that part of the world, so the history wasn’t the same old story that I’m used to, and the culture is completely different from many of the things I’ve seen before.

From there, I headed to the river. I walked through the textile souks and admired all of the pretty fabrics and scarves. The unfortunate thing about the souks, at least when I was there, is that you can’t just walk around anonymously. People are constantly trying to get your attention, talk to you, and get you to look inside their shops. I wish I could wear a sign telling them not to waste their time with me because I cannot be persuaded to buy something when I have literally no interest in buying anything. I had no interest in buying anything. No, I don’t want a pashmina scarf. I don’t want any spices. I don’t want a fake designer purse. What am I supposed to do with these things? Where am I supposed to put them? I’m currently living out of a backpack, and the rest of my life is in boxes/my childhood room at my parents’ house. If there’s one thing I definitely don’t need, it’s more stuff (I’m sure my parents would agree).

When I got to the river, I watched the abras, old boat “buses”, pull in and out of the dock. It was mesmerizing! It looked like they were doing a dance, and I was amazed that they weren’t constantly bumping into each other. The passengers sit on this raised middle part of the boat, and it’s only 1 dirham (30ish cents US) to get across. After I watched long enough to understand what was going on, I hopped onto a boat to cross the river. I think this was my favorite part of the whole day because it was the only thing that felt authentic. The boats were old and a bit sketchy, they were constantly packed, and the ride was cheap It was fun to be out on the water like that.

On the other side, I walked in the direction of the gold and spice souks. I spent a lot of time pretending that I was oblivious, pretending that I didn’t speak English (which is kind of hilarious because I pretended that I could only speak Armenian), and telling people that I didn’t want anything. People also kept trying to guess my ethnicity (this is a common occurrence in my life) with guesses ranging from Iranian to Arab to some mix of those with other things.

When it was about time to leave, I decided to take a boat back across the river just because I wanted to. If I had the time, I could have been happy riding back and forth all night. From the dock, I walked to the metro and spent the rest of my money on plane snacks. I had 12 dirhams left, and I strategically planned what snacks I could get, trying to get as close as possible to 12 without going over. Guess what I ended up with? 11.90. It doesn’t get much better than that! I left with a very healthy haul of three cookie varieties.

Getting back into the airport was a breeze because I didn’t have to check my bag. I was at the gate in less than 20 minutes. Turns out my speed was completely unnecessary because about an hour before take-off, we were informed that our flight was cancelled because of weather conditions in Yerevan. In classic Armenian fashion, everyone started calling their relatives in Yerevan, confirming that the weather was fine and that planes were landing, and arguing with the airline staff. None of this resulted in our flight getting un-cancelled, but they did agree to give out food vouchers which was enough to satisfy me.

I ended up sleeping on the floor because the chairs in the terminal all have armrests on them (how rude). It wasn’t the most restful night of my life, but of course I managed to sleep. I always do. I went to sleep around midnight, woke up about every two hours to change position, and got up for good at 8AM before our flight finally left at 2PM. Not exactly the ideal end to Dubai Day, but I survived and got free KFC out of it, so it could have been worse.