The last stop on my southern Armenia tour was Sisian, a town about 40 minutes north/west of Goris. Mary loaded me onto a marshrutka, and in no time, we were driving into Sisian. I had a reservation at a hotel in town that I made by emailing them and asking if there were any rooms available… after going there, I realize that was completely unnecessary. I knew that it wasn’t exactly high tourist season, but I honestly don’t know that there was anyone else staying there that night.

I had two things that I wanted to see while I was in Sisian – Shaki Waterfall and Karahunj. Both of them are reasonably walkable distances away from town, but the weather was gross, and I was feeling a little tired. I decided that the best way to guarantee that I would make it to them was to take a taxi. I asked the receptionist where I should go to find one (also, just keep in mind that any interactions I talk about in this post are happening in Armenian), and she gave me directions and said that it shouldn’t be more than 1500 dram (about $3) for each place I wanted to visit. She also insisted that it was an easy and short walk to Karahunj, so I planned to taxi to the waterfall and back and then walk there.

Taxis usually just hang out in certain places around town until you go and hire them, so I went to one of the hang out spots and tapped on a guy’s window until I got his attention. I asked him how much it was to go to Shaki Waterfall, wait, and drive me back. He said 3000 dram, and I’m pretty sure I laughed. In response, he asked how much I wanted to pay, I said 1000, and he asked how long I wanted to stay there. I said half an hour because like… who knows? I knew you had to walk a little to get there, and I didn’t want to feel rushed. He looked appalled by that, so I said, “I don’t know? 20 minutes? I just want to see it.” I guess that was good enough for him because he agreed, and off we went!

We chatted during the ride there, and I was proud of how much I understood and how much I could say. He told me my Armenian was good which is always nice, but I also think that sometimes people just say that because they’re happy you can speak at all. It’s okay, I’ll take the compliment. When we got to the waterfall parking lot, he pointed me in the direction of the path that leads there and said he’d be waiting when I got back.

Shaki Waterfall, like everything else in Armenia, has a legend (or factual story, depending on who you ask) behind its origin. According to the story, an army invaded a nearby village and kidnapped 93 beautiful maidens to give to their commander. When they reached the river, the maidens asked if they could bathe in the water and make themselves presentable after the long, dirty journey.

When the army agreed, they all jumped into the water and “disappeared”. One of them, Shaki, tried to escape by swimming across the river. She was about to be recaptured when a rock came up underneath her, and she was concealed by the water flowing over the rock (aka the waterfall).

I have a lot of questions about this story, especially because it’s incredibly vague about what happened to the maidens. They “disappeared”… which means what? I assume it means that they all drowned themselves, not that they went through some magical portal into another dimension. And Shaki? Did she also “disappear”? I don’t know. The legend is fine and all, but there are too many unanswered questions for my liking.

Anyway, the walk to the waterfall took less than 5 minutes which made the taxi driver’s reaction make more sense… a 30-minute stay would have given me more than 20 minutes to stand and look at the waterfall. It’s definitely nice, but like I said, the day was cold and wet, and after going and looking at it for a few minutes, I was ready to leave. I think I made it back to the car within 15 minutes, and the driver told me that I could have stayed longer. Geez, you can’t please anyone (hehe).

Soon after I got into the car to head back into Sisian, it started raining and I started rethinking my decision to walk to Karahunj. As we got closer to the city, I asked the driver how much it would be to go there as well. He looked at me like I was a nut and said that it wasn’t a good day to go and the path there would be very muddy. Oh, well. I was there for one day which meant that no matter how bad the conditions, if I wanted to see it, I didn’t have a choice. I explained that to him, and he said okay and that it would be 1000 dram. Totally reasonable and way better than what I was expecting, so I agreed, and off to Karahunj we went.

He dropped me off on the main road because, like he said, the path was too muddy for him to drive up. From there, I walked, and he was absolutely right. Within just a few steps, my shoes were completely weighed down with mud. I walked for probably 10-15 minutes, thankful with every step that I had decided to wear my boots.

Karahunj/Zorats Karer is, to put it simply, the Armenian Stonehenge. Any proud Armenian will tell you, however, that it’s 3,500 years older than Stonehenge in England. I’m not really sure how they date something like that, though. It’s not like they can carbon date it… it’s just rocks placed in a certain configuration. “They” say it’s from around 5500BC and was used as a religious site and maybe more for around 5000 years or so.

They say that Karahunj is where the name “Stonehenge” comes from. “Henge” doesn’t mean anything in English (well, it does now, but that’s because of the Armenians of course), but Kara = stone and hunj = sound in Armenian, so Karahunj might mean Speaking Stones or something to that effect. They say that it’s an ancient astronomical observatory, despite the fact that the rock alignment doesn’t really make sense in that context. There are also random round holes carved into some of the stones, and they have no idea what those were for.

In the center, there’s a temple to the primary god of the ancient Armenians, Ari, the sun god. Then, there’s a sort of circle of stones surrounding the central area and two squiggly arms that extend out to the north and south. There are 223 stones officially documented as part of the monument, and there are other broken stones around that may have originally been part. They’re of varying sizes, but the biggest ones weigh up to 10 tons! Eighty of those stones have a round hole carved into them. Like I said, there’s still no consensus about the purpose of the stone configuration. People have been able to draw some parallels between the layout and the stars, but there are also a lot of things that they can’t make sense of… so they don’t actually know anything for sure.

It was cool to see, especially knowing that it has such a weird and mysterious history. Some of those rocks are HUGE, and seeing it inspired the same questions of, “How the heck did people move these?” and, “WHY?” that came about when I was in Peru seeing the stuff that the Incas built. Plus, the setting is beautiful. It’s up on a bit of a hill surrounded by valleys, so there are pretty views in all directions.

After wandering around for a bit, completely mystified, I headed back through the sticky mud to my taxi. It started raining again when I was about a quarter of the way there, just confirming my decision to take a taxi instead of walking. That would have been miserable! My ears and nose were frozen, and the taxi driver gave me a knowing nod as I tried to scrape the mud off my shoes before getting back into the car and warm up my face on the drive back to the hotel. For sure worth the $4 that I paid for the taxi ride! 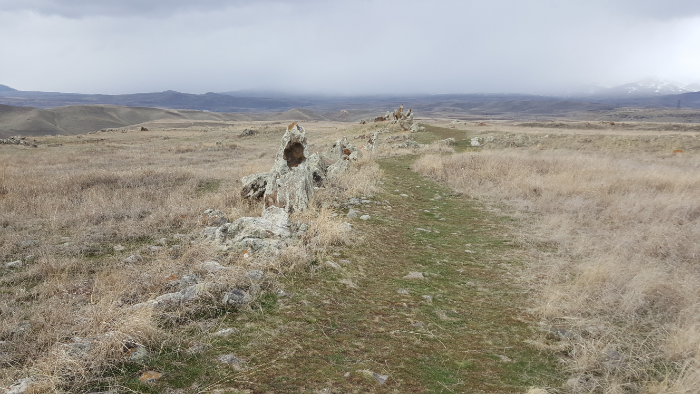 I spent that night relaxing at the hotel and getting ready for my trip back to Yerevan in the morning. One of Mary’s friends who lives in Sisian helped me to reserve a seat on a marshrutka (even though we never met in person!). I don’t know how people are supposed to be able to do any of this travelling without the kind of support system that I had. Without that and without language skills, I imagine it would have been a very different and more frustrating trip.

The end of my south adventure wasn’t the end of my Armenia fun. The day after I got back, some of my cousins came from the States to visit! We didn’t do much that I hadn’t already done before, but I’ll share some pictures from that week in my next post!