In case you were wondering (or worried), no, I didn’t fall off a cliff. I’m alive and well and just very, very far behind on writing. I’ve been keeping up my journal at least because if that’s a sloppy mess, no one besides me is going to read it… which is good because more than once, I’ve fallen asleep while typing and woken up to unintelligible nonsense on my computer screen.

I’m going to attempt to get back into the game because I’ve missed it! Writing about the things I’m seeing and doing forces me to learn so much more about them than I otherwise would, and that has added so much value to my travels. I know, I could just learn for the sake of learning, but when you’re learning to explain to someone else, you have to have a much fuller understanding of the subject. That makes me try way harder than I otherwise would to really get the complete picture.

So, excuse the side note, and let’s get back to Istanbul! My first few days were not the most sightseeing-efficient. Day 1 was a complete mess because I was so tired. It basically consisted of me eating, trying to keep my eyes open until my bed was ready, and taking a very long daytime “nap”… and then waking up from that nap, sitting in bed for a couple of hours, and going to sleep for the night. I kind of considered going for a walk during the “sitting in bed” time, but it was raining and ugh and instead I just sat.

I was determined to make day 2 better… and it was raining again. I told myself that the day would be counted as a success if I just managed to make myself leave the hostel (I know, this is not a realistic life I’m leading at the moment), and that was enough motivation to make me step outside. I attempted, and failed, to take a guided walking tour of the city (I couldn’t find the meeting point because I was still a mental mess), so I defiantly decided that I didn’t need a tour guide anyway and found a self-guided walking tour online.

My journey started in Old Town at the site of the old Hippodrome, center of the Roman Constantinople. The Romans always crack me up because they always have the same priorities when it comes to outfitting newly-conquered cities to the Roman standard. Essential parts of a city, according to the Romans: sporting facilities, aqueducts, baths. So fancy.

Of course, one of the first things to be constructed were baths because hygiene and what on earth are you supposed to do with your social life otherwise? And then, what is a city without a hippodrome for chariot races?? That was constructed near the beginning as well, and it was eventually expanded by Constantine to include stands for 100,000 people and epic columns and statues and gates to make it worthy of being the hippodrome of “New Rome”. This was the social and geographic center of the city from around the 200s-1450s AD when the Ottomans took control. It started to fall into disrepair and was eventually turned into a park, which is its current state today. Most of the Roman monuments are gone, but a few still live in the park: two obelisks and a broken column.

The first obelisk, the Obelisk of Theodosius, is covered with hieroglyphs and, like practically every single “Roman” obelisk, was stolen from Egypt. This one dates back to 1450BC! It was moved to the Hippodrome in 390AD, and only the top 1/3 of it remains which is completely insane because it’s still huge. The rest was damaged, they think, during transportation and re-erection… and my response to that is, DUH! What do you expect when you try to move a 60m tall piece of granite???

The broken Serpentine Column is situated next to the obelisk. This was built in the 400s BC by the Greeks after a battle victory, and supposedly it’s made from the melted-down shields of the Persian soldiers who they defeated. It was 8 meters high, and the twists in the column are the bodies of three serpents, formerly with heads that held a golden bowl. Unfortunately, it was plundered 300 years ago, and this little stump is what remains, though they did manage to find a piece of one of the serpent heads.

Finally, the Constantine Obelisk sits on the other side of the column. It’s a bit sad looking now, and I’ll give you one guess why… That’s right, it was plundered! It seems like everything in the Roman universe is somehow tainted by theft. It was built in the 10th century by Constantine, and that sad stone exterior used to be covered with gilded bronze plates that depicted the military triumphs of his grandfather, Emperor Basil I. During the Crusades, these were stolen and melted down.

There used to be many other monuments in the Hippodrome. Many of them were probably stolen before they were placed there, and later they were stolen again to be placed elsewhere. The whole concept of stealing a monument still just baffles me. How? And why? And how?? “Ah, this million-ton bronze sculpture would look fantastic in my garden, right next to the million-ton pointy rock that I acquired in Egypt. Men! Load it up!” That’s how I imagine those decisions took place. That was the ancient way I guess.

The Hippodrome also contains a not-stolen and not-Roman gift from the German Kaiser Wilhelm II after he visited in the late 1800s. Eh. He probably stole it from someone. Anyway, it’s a fountain with a beautiful gold mosaic ceiling. I don’t know about you, but no one’s ever given me a gift like that. Also, what to do with it? “Thank you, Kaiser, for this wonderful gift. We will put it… uhhh… in the Hippodrome! Right in the center of the city and mostly because we have a bunch of open space there so why not.”

Constantine’s Great Palace was right next to the Hippodrome, and almost nothing remains… except for some amazing mosaics that were discovered in the 1930s underneath shops in the nearby Bazaar. More mosaics were found in the 50s, and they were brought together to form the Mosaic Museum. I’m personally a huge fan of mosaics, so I was completely sold on going. The most substantial mosaics formed the floor of a courtyard in the palace and date back to 450AD.

They estimate that the floor used 75-80 million cubes with about 40,000 per square meter. They’re very small, about 5mm per side, and that allows for some spectacular detail. It also must have taken forever to make. The main part of the mosaic is composed of a series of scenes of varying subject matter: people hunting, animals fighting, mythological stories, pictures of rural life, etc. It’s pretty spectacular. I can’t even imagine seeing it in its original form with columns lining the sides. I bet you were even allowed to walk on it back then.

The surviving portion of the floor is about 250 square meters… and guess how big they think the entire thing was? SEVEN TO EIGHT times that size. That’s more than the area of 1.5 Olympic-sized swimming pools. How do you even start that project? How do you make images that actually look how they’re supposed to look?? I thought that painting was hard on a large scale, but this is next level. 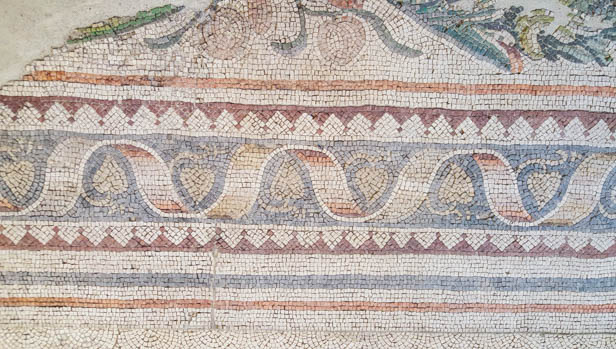 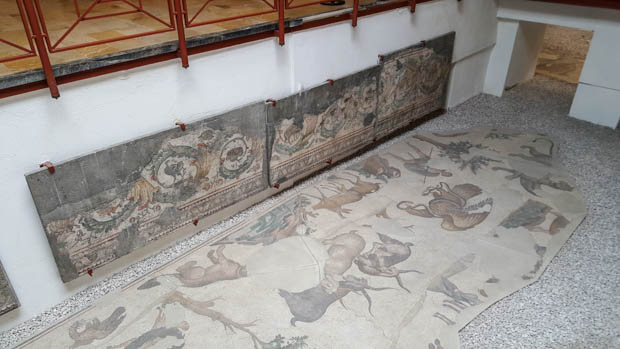 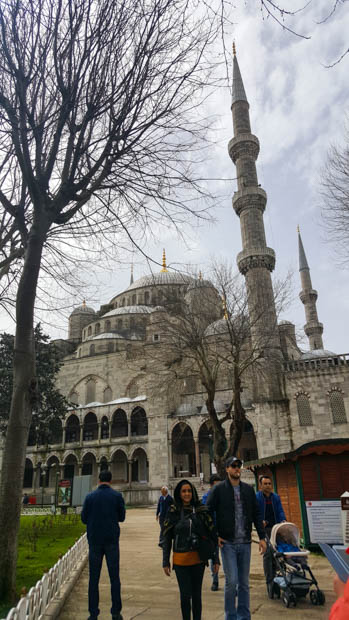 The main portion of the Grand Palace once stood on the site of the famous Blue Mosque. Unfortunately, when I visited, it was closed for renovations and I don’t want to think about it or I’ll be sad. The mosque was completed in 1616AD after only 7 years of construction! That may seem like a long time, but when you think about the fact that so many of the world’s epic churches took centuries to complete, it was basically finished in the blink of an eye.

There are six minarets, and this is what the Imams (worship leaders) used to climb to sing the Call to Prayer. Five times a day, right before the five Muslim prayer times (dawn, midday, afternoon, sunset, night), the Imams sing to invite people to come to the mosque to pray. Back in the pre-loudspeaker days, the Imams would climb to the top to sing, but now they just use a microphone that’s connected to the speakers in the minarets. Kind of a bummer in my opinion. The five daily prayers each take about 5-10 minutes and are meant to purify the soul, teach discipline and humility, and remind you to think about God throughout the day.

With the construction, only the courtyard leading into the mosque was open. At least that was something. I’m sure the inside isn’t that cool anyway (lies I tell to myself. I’m sure it’s amazing). 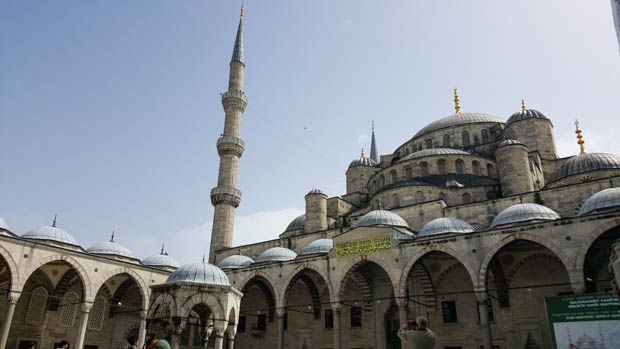 Between the Blue Mosque and another iconic structure that I’ll talk about in a later post, Hagia Sophia, is Sultan Ahmet Park. This is the site of the old Roman Baths of Zeuxippus (those Romans have to have their baths!), and there are Turkish bathhouses nearby that you can still visit today.

With my Old Town tour basically finished, I decided to take advantage of the beautiful weather (sarcasm… it was still gross out) and go on a Bosphorus boat cruise. Why? Don’t ask me. These are things that you should do on a nice, pretty, clear day. But sometimes opportunities present themselves at less-than-ideal times. I got a good deal on the ticket, so I went despite the weather. Enjoy the pictures and pretend that it’s not cloudy or foggy or gross. 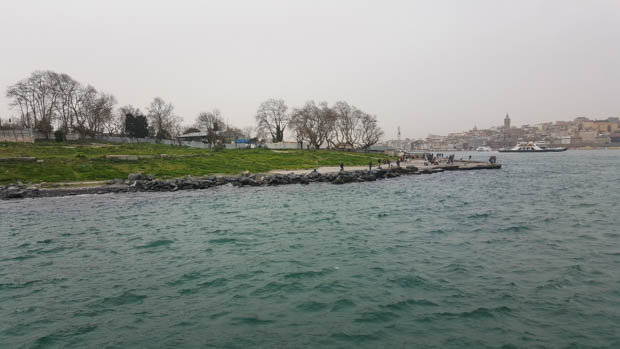 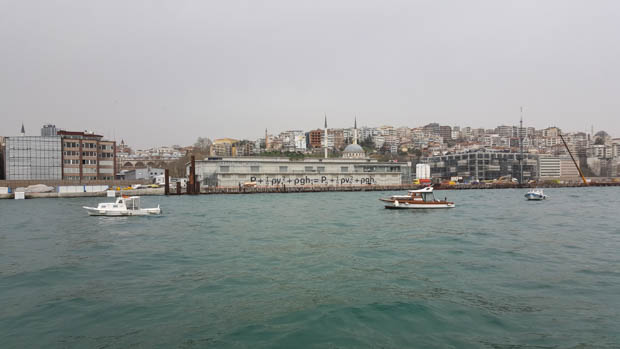 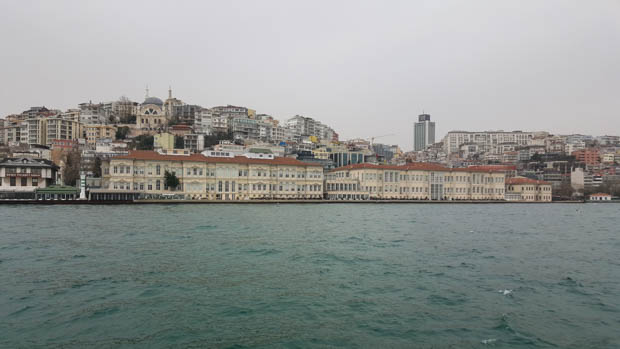 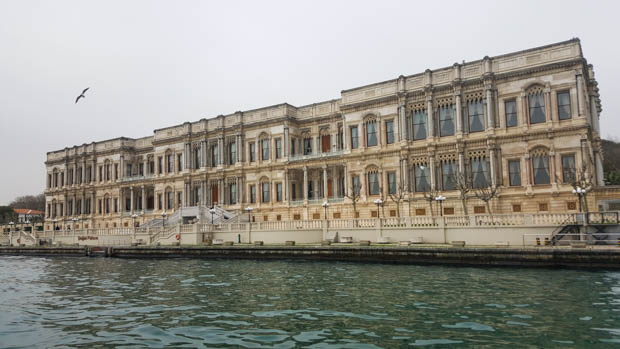 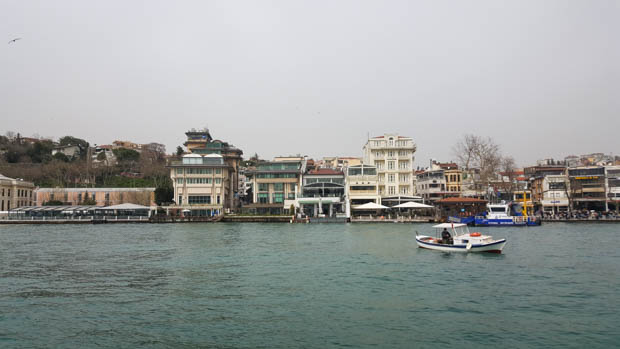 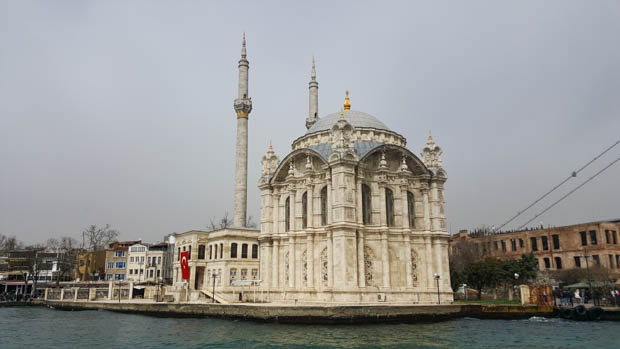 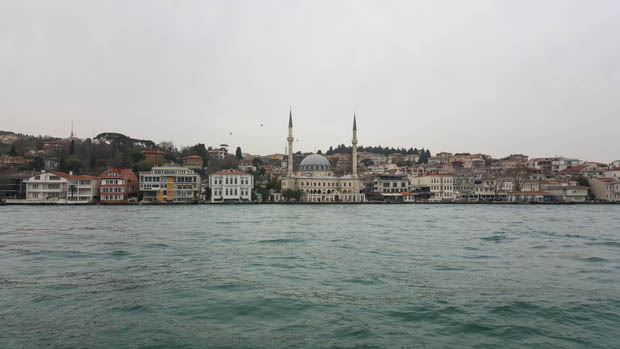 [NEW POST] Las Tintoreras is a group of uninhabite