As soon as I left church, my aggressive sightseeing itinerary started. I walked across the river, back to the southern Europe part of Istanbul, ready to get going on my list. I got off to a great start… I tried to see the New Mosque, or Yeni Camii, but it’s apparently so new that it’s not finished yet. Okay! No problem! 0/1. I continued on.

Next to that is the spice market. I generally hate markets because they usually involve a lot of people yelling at you, but if you want to see the market, you don’t have much of a choice except to go and deal with it. I walked through, snapped some pictures, did a stand-up job of ignoring everyone who yelled at me, and got out as quickly as I could.

I tried to go to another mosque a couple blocks away, but I literally couldn’t find the entrance (and I walked around the block TWICE before I gave up). These seem to be the rules of mosques:

From there, I zig-zagged my way across the city to see the rest of the mosques on my list. Zeyrek Mosque was at the top of a hill (ugh), and I managed to find it impressively easily… you might be thinking, “Lara, it’s at the top of a hill… how hard could it possibly be to find?” My only answer to that is, you go to Istanbul and try to find a specific mosque and THEN tell me if you’re impressed. AND I only walked halfway around the building before I found the door.

Instead of taking the main road to my next stop, I decided to be adventurous and go on the smaller streets. Well, I don’t know how adventurous you’re being if you’re following a map, but I felt like it was a big step because I had gotten lost about a million times already (while using the map).

My “back route” took me by a park where a bunch of locals were hanging out, there were shops all around, and everything was bustling. It was cool! So there I went, just bopping along and enjoying the chaos, when out of nowhere, the aqueducts emerged!! I knew that they existed, but I didn’t know exactly where and had totally forgotten about them. They are hard to forget after you’ve seen them. So big and impressive and beautiful! And they stretch for blocks and blocks. On the other side of this particular part, there was a big park FILLED with people. I loved it! Seeing people living their normal lives. And all of that happening with the most epic Roman ruin backdrop you could imagine. How cool to live in a city like that, where there’s so much history surrounding you everywhere?! I did what anyone would do in this situation and got an ice cream to eat while soaking in the history.

My next stop was Fatih Camii which had been recommended to me by multiple people. The mosque complex was MASSIVE. I walked through the gates, and it was like entering a different world. There were people everywhere. Kids were running around and playing, people were sitting and chilling, and it really felt like the mosque was a social hub. I could have sat there for hours just watching people. I didn’t have hours though, so I found the visitors’ entrance (maybe, who even knows?) and went inside.

The inside was marvelous. It was kind of like being inside a frilly layer cake. There was a big central dome and then layers and layers of half-domes that spread out from there. And TONS of stained glass. And another ridiculously large chandelier, hanging low near the ground. I don’t understand why they do that. The painting in the dome was beautiful but standard. It was the rest of the ambiance that made it special.

Just like outside, there were kids running around and people talking and people studying and a guy teaching some kids how to pray. I’m going to say this a million more times, but I just loved how it was like a community gathering place. It felt open and welcoming.

The next mosque was a bit quieter… the only other person inside was this dude sleeping in the corner. As far as interior décor goes though, this one is my #1 favorite from my trip. It’s called Pertevniyal Valide Sultan Mosque, and from the outside, it looks like any other mosque. The inside though… A bunch of the mosques have the painting style where the main dome is mostly white except for this circle decal in the center and then little circle decals around it. They’re pretty, but after you see two of them, they start to blur together because they’re all kind of the same. This one was completely different. Blue was the main color (which makes it bound to be a favorite for me), and every surface was painted. It was so elegantly done. I think it also helped that there was just one chandelier string hanging down from the main dome instead of the million support strings that the big chandeliers need. I was totally obsessed and definitely could have stayed there all day.

That made me wish a bit that I had just gone into every single little mosque I passed by. I’m sure some would have been underwhelming, but there must be others lurking that are just amazing. And the smaller the better probably because the big mosques mostly had that boring circle painting deal.

From there, I went to Laleli Mosque, this little one kind of hidden off the streets. I decided to try looking for it in a little alleyway (yes, I know how ridiculous that sounds, but I’m telling you… they’re all hiding!), and there was the mosque, sitting above me! This one was back to the similar painting style, and even though I say that it’s boring, it’s still spectacular no matter how many times you see it. And there are always amazing stained glass windows. There is no shortage of things to marvel at.

Prince Mosque was next, and it was another one of those mosques that’s more than just a building, it’s a compound. This one was a little quieter, not as much chaos on the inside. The ceiling painting was similar to the usual circle thing but with enough of a twist that I thought it was exciting, plus the colors were some of my favorites. The outdoor area had a lot of grass and a nice personality, so I decided to spend some time sitting under a tree. There were families and couples and other people out enjoying the day and the pretty landscaping around the mosque. It was a little oasis in the center of the city.

From there, I had a series of fails. Beyazit Mosque was mostly closed for renovations and the Grand Bazaar was closed because it was Sunday (whoops… bad planning on my part, but honestly, I don’t think I would have loved it anyway). I went to look at the entrance gate to Istanbul University because someone told me to, but it was another one of those “okay so I’m here… but why?” moments.

Since I was in the neighborhood, I popped into two mosques near the Grand Bazaar, Nuruosmaniye and Atik Ali Pasa.

Since one ice cream in a day isn’t enough, I went and got another one. This was one of the special Turkish ice creams which I’ve mentioned before. It’s like Arabic ice cream that uses a binding resin that helps to prevent melting, and the scoopers always put on a big show when they’re scooping it.

My last big stop of the day was Suleymaniye Mosque, and it ended up being the perfect way to end my day. It’s at the top of a big hill, and there’s an awesome view of the city, plus the mosque compound was huge and brimming with people again. The inside was pretty, though it was all pink and not necessarily my favorite one. That’s okay though. They can’t all be my favorite. 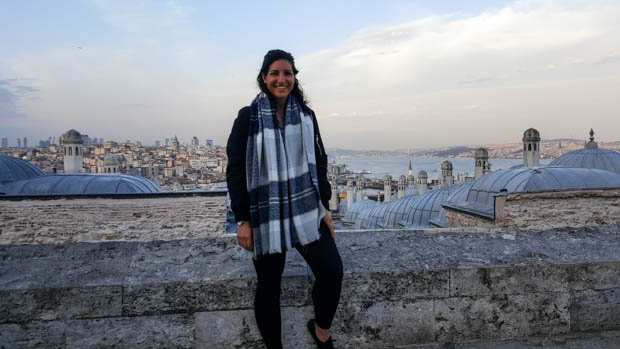 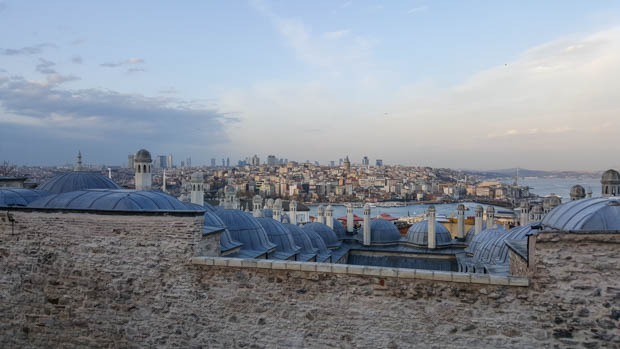 By the time I left, I was pretty exhausted. I wandered my way back towards the hostel before deciding that I really did need to eat an actual meal (especially since lunch consisted of two ice creams… hehe I love being a grown up). I found my way back to the usual food street and got a couple of lahmajuns before heading home and practically collapsing. Punishment day #2 successful.