In my last post, I explained some of the history behind the Tower of London. Obviously, many things look a lot different than they did during the palace and prison and torture days, but there are some things that haven’t changed much.

Certain parts of the Tower have been tourist attractions since the 17th century. One of these is the Jewel House where the Crown Jewels are kept! I made a beeline for the jewels when I got inside because everyone says that the line gets very long later in the day. I don’t know much about precious gemstones and jewelry, but even I could tell that the stuff they have in the Jewel House is ridiculous. They have the coronation crown which weighs 7 pounds. Imagine having to wear that on your head! There’s also the world’s largest clear-cut diamond. It’s 530 carats which means nothing to me but apparently the average size for an engagement ring diamond is around 1 carat, soooo… it’s 530 times that. The oldest object, the anointing spoon used in coronations, is from the 1300s. Most of the other objects are much newer because the originals were melted down when the monarchy was abolished in the English Civil War (1649).

My personal favorite object in the Jewel House was a “punch bowl” that was made of solid gold and, according to the sign, could hold 144 bottles of wine. 144 BOTTLES. Now, I know I’m just a commoner who doesn’t know how anything works, but could someone PLEASE explain to me why that’s necessary?? I couldn’t wrap my head around most of the things in the room, to be honest. The gemstones weren’t that impressive because my brain couldn’t comprehend that they weren’t rhinestones, they were real. I thought about how people save up to buy gold jewelry… how many rings and necklaces do you think you could make with a 144-bottles-of-wine-sized punch bowl? Insanity.

When I was finished gaping at the jewels, I went on a Yeoman Warder tour. The Yeoman Warders, popularly called Beefeaters (though the origin of that name is unknown), are the keepers of the Tower, responsible for guarding any prisoners (historically) and watching over the crown jewels. There are 37 of them who live within the Tower walls with their families. To qualify, they must have served in the armed forces for at least 22 years and been awarded a good conduct medal. They give free tours throughout the day, explaining the history of and telling stories about the Tower. The whole thing is a kind of theatrical experience and is very well done.

The Tower complex is HUGE. After the Beefeater tour, I checked out the torture devices, walked along the walls, and explored a bunch of different towers before going into the White Tower. Today, it’s filled with exhibitions of armor and weaponry. I can’t say I’m terribly interested in either, but the collection was still impressive which is pretty much the point. Originally, its purpose was to show the monarch’s right to rule and awe visitors. 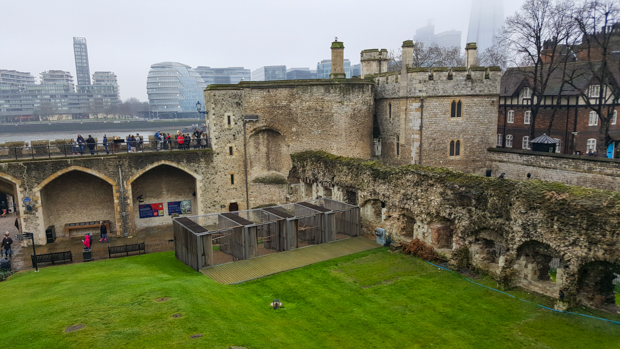 One of the unsolved mysteries of the Tower of London took place in the White Tower. In 1483, King Edward IV died. His son, Edward V, was next in line for the throne, but he was only 12 years old. Edward V’s uncle was put in charge until he was old enough to rule, and he brought Edward and his 9-year-old brother, Richard, to the Tower of London. After their uncle was crowned king, the boys disappeared and were thought to have been murdered, though their bodies were nowhere to be found. In 1674, during some construction work, the bones of two children were found underneath a staircase in the White Tower. They were assumed to be the bones Edward and Richard and were reburied in Westminster Abbey; however, they haven’t been tested to confirm that assumption. And so, the mystery continues. 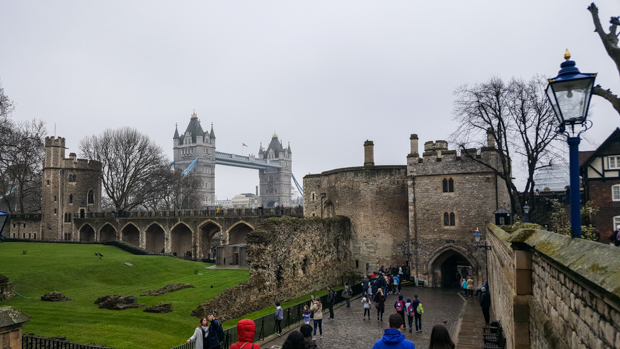 Another former attraction at the Tower was the “Menagerie”, basically a predecessor of modern-day zoos but way less functional. The royalty used to receive exotic animals as gifts from leaders of other nations (actually, fun fact: the Queen STILL receives animals as gifts – what?!?! – but now they’re sent to the London Zoo). The Tower housed this collection starting the early 13th century, including now-extinct Barbary lions, leopards, a polar bear that used to fish for food in the Thames River, monkeys, bears, an African elephant that was fed wine every day in an attempt to keep it warm (!?!? And then it died after four years because obviously that didn’t work), a hyena, wolves, an ostrich that died from eating too many nails thanks to ignorant visitors who thought ostriches ate iron, birds, snakes that were wrapped in blankets and put on a stove to keep them warm, and more. They weren’t terribly well-kept, partly because the people in charge didn’t know much about how to take care of some of them, and would attack each other and sometimes visitors. The Menagerie was opened to the public in the 18th century, and admission was either 3 half-pence (cents) or a dog or cat to feed to the lions. I promise I didn’t make that up. In the 19th century, the animals were moved to Regent’s Park, now the site of the London Zoo where they are properly cared for. 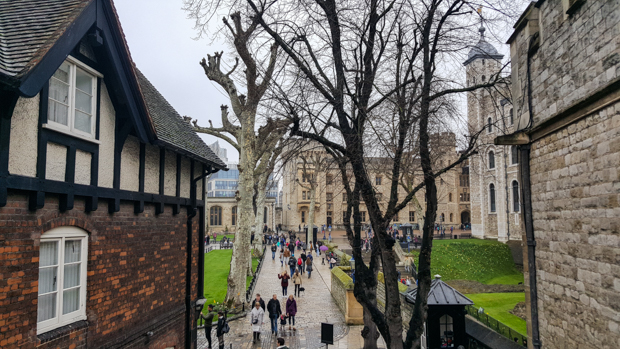 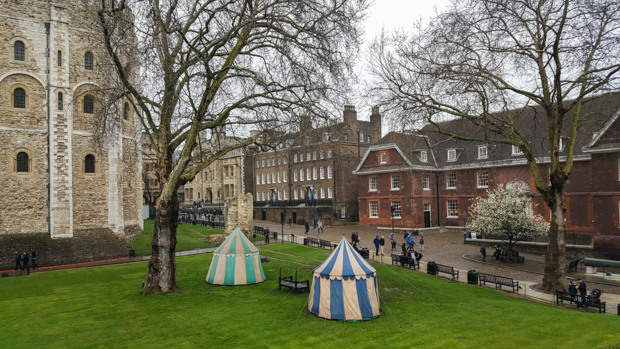 There are still some animals on the Tower grounds… ravens. Six ravens are kept due to the superstition that if the ravens depart, the Tower will crumble and the kingdom will follow. No one is completely sure how or why the superstition and tradition came to be, but there’s no turning back now! The Tower ravens are cared for by one of the Beefeaters, the Ravenmaster. One of the signs said that they each eat 170g of raw meat and bird biscuits soaked in blood each day. So that’s gross. And sometimes, for a special treat, they get a sheep’s heart. Double ew.

By the time I left the Tower, it was about to close, along with everything else I was considering seeing. So much for my ambitious plans for the day! I should have known, though, because never in my life have I gone through a museum quickly.

I made one last stop at Tower Bridge, the famous bridge next to the Tower. Even though the two look similar, the bridge was built during Victorian times (late 1800s). It was required to “blend in” with its surroundings and be built in the Gothic style, hence why it stylistically looks much older than it is. Even though it’s not THAT old comparatively, it’s still pretty impressive that they made an operable bridge 120 years ago that worked for 70 years (the hydraulic system was replaced in the 1970s).

After that, I went snack shopping (my favorite part of travel days!) and headed back to my hostel to get ready to go to the airport. Next stop: Iceland!