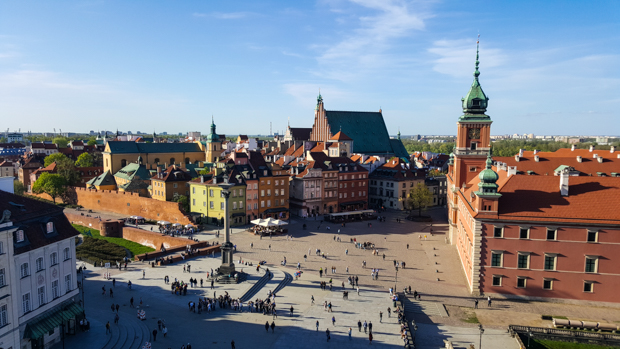 My flight landed in Warsaw (Warszawa in Polish, pronounced like “Varshava”) at about 6:30 in the morning. I wanted to collapse from exhaustion, but I still had a whole day ahead so that wasn’t an option. I dropped my bags off at the hostel at around 8AM and then had to scram until the 2PM check-in time. It’s probably better that I couldn’t check in right away because I would have gone to sleep and wasted the whole day.

The best way to start off in a new city where you have absolutely no plan is to find a free walking tour! You don’t have to plan anything, they give you some historical context and make sure you hit the highlights, and you can ask your guide for recommendations of other things to check out after the tour. It’s a win, win, win. So, that’s what I did. I found one that started at 10:30, wandered across the city to the meeting point, and went to a café for hot chocolate and a cinnamon roll while I waited (I intentionally picked some extra-nutritious options to make up for all the muffins I ate the day before).

The tour was awesome… probably one of the best ones I’ve been on (if you’re ever in Poland, check them out). The only drawback was the fact that it started mist-raining halfway through, but I guess they can’t control the weather.

We started by the statue of King Sigismund III in Castle Square in Warsaw’s Old Town. This is on the side of the river that was occupied by the Nazis during WWII, and even though it looks old, practically all of it was constructed after 1945. Warsaw wasn’t just occupied, it was destroyed. Hitler specifically commanded that the city be leveled as punishment for the resistance put up by its residents. The estimates are that 90% of Old Town, 80% of New Town, and 30% of the city on the Russian-occupied side of the river were destroyed. That’s insane. The damage was so bad that one proposal suggested leaving it in ruins as a sort of war memorial and starting fresh somewhere else.

One of the only buildings that remained standing in the Old Town is St. Anne’s Church (below), located right near the castle.

The Warszawians are particularly proud of the rebuilding of the city. Using historical paintings, the Old Town especially was rebuilt to look the same as it did before. Poland didn’t receive money to help with their rebuilding efforts, so the saying of the day became, “The entire nation builds its capital.” Funds were donated by Poles near and far, and those in and around the city helped to remove rubble and painstakingly reconstruct the buildings and monuments. Some people say that it’s not genuine because it was rebuilt, that it’s like a weird Disneyland, but I think it’s beautiful. It’s a testament to the determination and pride of the Polish people.

One of the buildings that WAS completely demolished was the castle. This was where the monarchy moved when the Polish capital shifted from Krakow to Warsaw. The castle was looted prior to its destruction. Much was taken by the enemies, but some of the artwork and even pieces of the building were secretly smuggled out by museum workers who were already preparing for the rebuilding process. The castle was blown up in 1944.

Just off of Castle Square is St. John’s Archcathedral, an important Roman Catholic church. During WWII, a tank filled with explosives was driven into the church, severely damaging it. The surviving walls later had holes drilled into them to hold explosives, leading to the complete destruction of the original building. 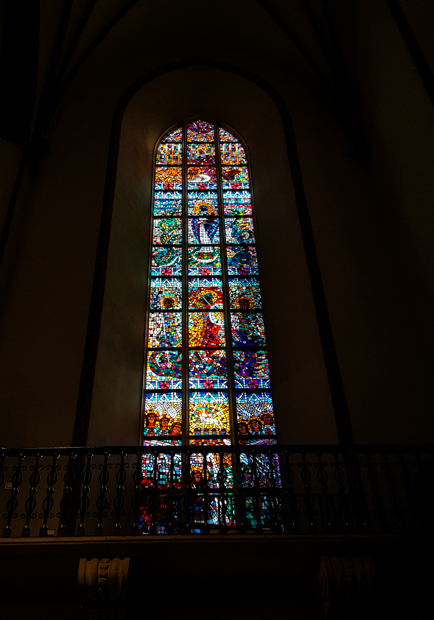 The church’s crypt houses some of the Polish royalty, along with other prominent Poles. There used to be a graveyard behind the church as well, but it was relocated in the late 1700s for sanitary reasons and because it was right next to the palace. I guess they realized that having a smelly cemetery in the middle of your town isn’t exactly the best urban planning decision.

The former cemetery area is now a small square behind the church, occupied only by a large church bell. The bell was designed by the same artist responsible for the statue of King Sigismund III on top of the column in Castle Square. It is said that if you put your hand on the bell and walk around while thinking of a wish, it will be granted.

In the same square as the wishing bell is a house with the skinniest possible facade. Back in the day, property was taxed based on the length of your facade… facing the main street. Some smarty pants designed his house to pay as little tax as possible.

Joke’s on him though, because the back of his house faced the “rubbish mountain” where people used to unload their trash and human waste. Yum. It’s also right near the palace, and kings never wanted to stay there because the smell carried. After Napoleon visited the city and remarked on the terrible smell, it was covered with earth making a nice man-made hill. This is now where some people have started leaving love locks which is funny because like… ew.

At the heart of Old Town is the Old Town Market Square. From the beginning, it was the center of the city’s social life. This was the spot for trade, for fairs and festivals, and for the occasional execution (including that unfortunate soul who tried to assassinate the king). Later, a town hall was built in the square where it remained for about 400 years. In my opinion, this is the part of the city where the rebuilding efforts are the most impressive. I. Love. This. Square. Feast your eyes on these facades, please. 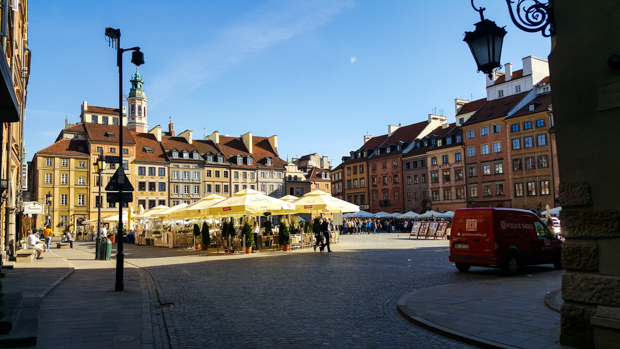 In the center of the square is the Warsaw Mermaid, the symbol of the city (she’s on the Warsaw coat of arms!). Legend has it that she’s the sister of the famous Copenhagen mermaid. Her sister got tired; that’s why she stopped in Denmark. The Warsaw mermaid kept going, swimming up the Vistula River until deciding to make her home in Warsaw. Once, she was captured by a merchant who planned to make some money off of her. She called out for help and was rescued by some locals. To say thank you, she promised that she would be there to protect them if they ever needed her.

Okay, geez, I’m tired. I’m going to take a hint from the Warsaw Mermaid and stop my journey for now in Old Town Market Square. I apparently saw more in Warsaw than I realized… I really thought I could give you the full tour in one post! If I ever want you to come back though, I should stop here. So, there’s your half-tour of Warsaw. We didn’t even make it out of Old Town yet! So much for my estimation skills. Until next time…