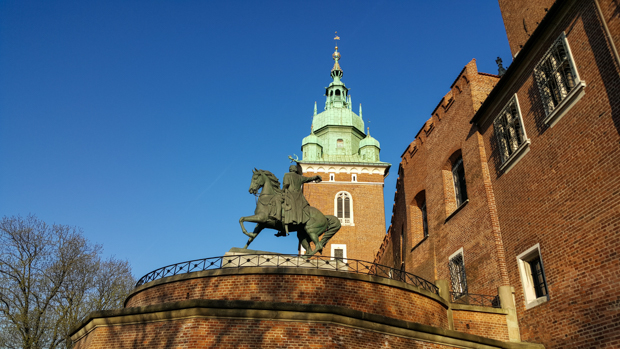 When we left off last time, Poland had just been partitioned for the third time, resulting in ALL of the Polish lands being given to other countries. Poland was gone. Clearly, considering that Poland is a country today, that’s not where the story ends.

After the Third Partition, the Poles continued to resist, grasping at anything that might lead to their victory and independence. They fought with Napoleon Bonaparte against Russia, but he was defeated in 1815 by the “Holy Alliance” of Russia, Prussia, and Austria, formed to guarantee the elimination of any radical movements. Two more Polish uprisings were attempted in 1830 and 1863, and both were crushed.

Despite the lack of a Polish state, the Polish people continued to make their mark on the world. Frédéric Chopin (1810-49), the famous pianist and composer, grew up in Warsaw. In 1853, Polish inventor Ignacy Łukasiewicz developed the modern kerosene lamp (fun fact: his family was Armenian! Of course haha). The scientist Marie Skłodowska Curie (1867-1934) was born in Warsaw, earned two Nobel prizes for her work in physics and chemistry, and named the element “polonium” after her beloved Poland.

Russian was made the official language in the Russian-controlled areas in an attempt to stifle Polish culture, and the Prussians and Austrians similarly tried to keep control of their Polish subjects. However, the Polish people were determined to keep their language and history alive and operated unofficial education centers. They also advocated for Poland to the enemies of their invaders, waiting for a chance to get their land back.

That opportunity came in 1918 at the end of WWI. Poland fought with the Allies and was rewarded with land and independence. The Second Polish Republic was born, coming into the world with the simple task of rebuilding and uniting a country divided for over 120 years. Adding to this strain, Poland quickly entered a border war with Russia until an unexpected Polish victory in the 1920 Battle of Warsaw crippled the Soviet forces.

When Poland was formed, it was placed under the control of a “chief of state”, Józef Piłsudski, who had been a general during WWI. A new government and constitution were created in 1921, but the first president was assassinated after only one year. Unimpressed with the new government and certain of its collapse, Józef led a coup in 1926 to restore order and served as a quasi-dictator, working to stabilize the country, until his death in 1935.

Poland never even got a chance to catch its breath. In 1939, Soviet Russia and Nazi Germany signed an agreement to split Poland between them. On September 1, 1939, the Nazis invaded Poland from the west, marking the start of WWII. On the 17th, Russia invaded from the east, splitting the country into two. Poland fell in 27 days, and its government fled to exile in London.

WWII was not kind to the Polish. On the Russian side of the country, the invaders quickly worked to bring the Polish people under their control. Hundreds of thousands were imprisoned or killed. In one incident, the remains of 4,500 Polish officers were discovered in a forest in April 1943. The Soviets tried to blame the massacre on the Nazis who, despite committing countless atrocities during the war, were not responsible for that one. After the Nazis invaded Russia in 1941, Russia and the exiled Polish government signed a peace treaty. Russia released its approximately 200,000 Polish POWs, but after the discovery of the massacre and continued disagreements about where the Polish-Russian border should stand, relations between the countries remained tense.

On the Nazi side of the country, people were sent en masse to concentration and, eventually, extermination camps. The Nazi plan was to keep the Poles as slaves, but that required an uneducated population. The educated were killed, schools were closed, and any resistors were sent without second thought to concentration camps.

The Jewish population, which had been thoroughly integrated into the Polish population thanks to years of tolerant policies, was separated out and placed in ghettos. The ghettos were emptied in 1943, and the Jews were sent to be killed at the Auschwitz and Treblinka extermination camps (Treblinka was about 60 miles from Warsaw and was the second deadliest camp in Poland, responsible for killing 700,000-900,000 Jews. About 1 million Jews are estimated to have been killed at Auschwitz).

WWII ended in 1945, but that was too late for the approximately 6 million Poles who were murdered, 3 million of whom were Jewish.

Poland was “liberated” in 1945 by the Soviets. The exiled government returned from London, and under pressure from Russia, it became more and more communist over the next few years. The government of the “People’s Republic of Poland” was nothing more than a Soviet puppet. During the post-war negotiations, the entire country was shifted west. Russia took possession of the eastern land that it wanted, and some of the eastern part of Germany was given to Poland. About 2 million people were resettled as a result of this shifting. For much of its history, Poland was extremely multi-ethnic. Between WWII and the following resettlements, it became very homogenously Polish.

The forced communism of the post-WWII years made Poland’s rebuilding process much slower than in Western European countries. Instead of having a chance to recover from the impact of the war, the Polish people continued to fight for their rights. There was constant unrest, and protests were always brutally suppressed. In 1970, demonstrations against rising food prices were met with violence from troops, killing many of the protestors.

In response to this disaster, a new leader took control, Edward Gierek. He attempted to make things better by borrowing from the west to raise the standard of living. The problem came when the loans needed to be repaid, and there was no money to do so. In 1980, food as much as doubled in price, and workers went on strike across the country.

In the city of Gdansk, shipyard employees went on strike, leading to the formation of the “Solidarity” Trade Union which quickly spread across the country. At its peak, there were 9 million members or about 25% of the Polish population. Eventually, Solidarity managed to break Soviet control. In 1988, freedom of the press was finally granted, and a portion of the Polish Parliament went up for a free election. Nearly all of the available seats were won by Solidarity members, starting the transition from communist to capitalist and a new form of government, a liberal parliamentary democracy. The first elections of the Third Polish Republic were conducted in 1989.

What a journey, huh? After all that, I’m sure you’re ready to get out of the classroom and start exploring! Next time, Warsaw!