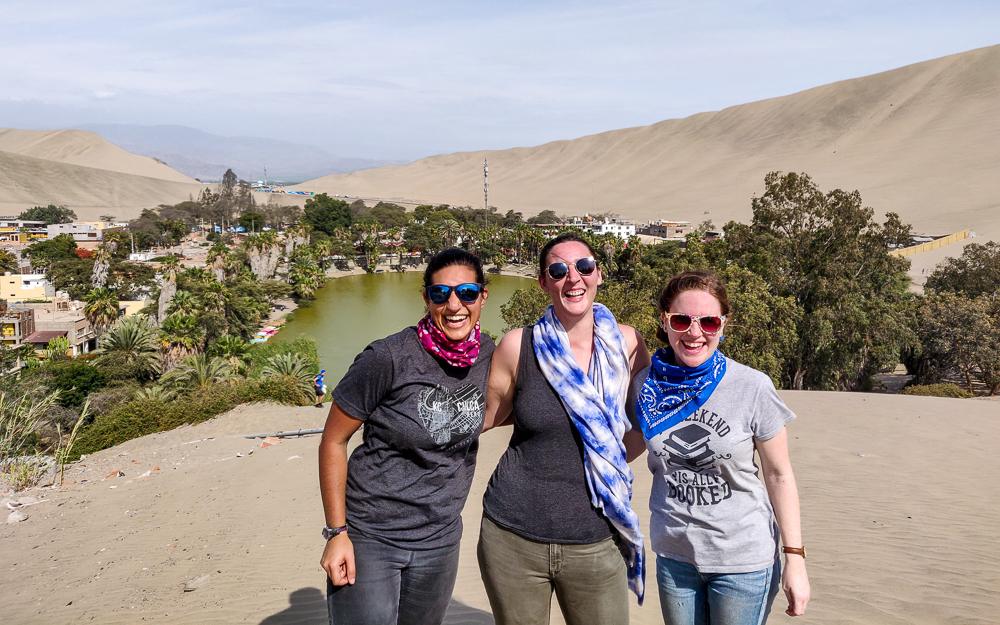 Freedom! Jocelyn, Julie, and I walked out of EA and practically skipped down our street towards the bus stop, ready for our weekend of fun to commence. Living and working within the walls of EA can feel a bit containing, and sometimes, even just stepping out onto the smelly, dirty street is enough to make you feel liberated.

We were headed to Ica, a town about three hours south of Chilca by car. Julie said the bus took five hours, and I was foolishly optimistic when maps said it would only take three. I thought, “So maybe it’s four on the bus. How could the bus add TWO hours to the time?” Well, I still don’t know the answer to that, but I can confirm that it took the full five hours to get there. The bus wasn’t very crowded, so we stretched out in the back row and made the most of it.

By the time we reached the bus station in Ica, we were exhausted. I think that the definitive crushing of my hope for a shorter bus ride really took it out of me. We decided to walk the 15 minutes to our hotel to stretch our legs out, and walking through the streets of Ica, I felt like a small-town girl in the big city. I don’t know why exactly, but I think that in my mind, Peru only consists of Lima and Cusco and then tiny towns like Chilca. Ica is by no means big, but it is definitely a city. The streets were bustling, and it made me feel like I could really enjoy living in Peru if I was somewhere like that (aka a real city) instead of in the boonies.

Saturday was our big day of fun! Julie had been to Ica before and had done a day tour that included a bunch of little stops and then, the main event, a dune buggy ride and sandboarding. This was the primary motivation behind our trip. I had learned only a few months before arriving in Peru that sandboarding was a thing there (thank you, Instagram), and when I committed to serving at EA, I decided that was my sole tourism goal for the year. And so, with time running out, off to Ica we went!

Our strategy for finding a tour was to go to the main square. That was the extent of the plan, and that was all we needed because the moment we crossed the street into the square, a guy came over trying to sell us a tour. Annoying, unless that’s what you’re looking for. We went to the tour office, checked out what was included, signed up, and paid 35 soles each (about $11). Does an $11 day tour sound too good to be true? Well, it was in Spanish… but we knew that going in. I wasn’t too concerned because for me, everything beyond sandboarding was secondary.

The tour started with a cathedral in town named after the patron saint of Ica, Señor de Luren. The church that stands there now was just completed in 2019! So, we got to see it when it was still hot off the presses. The original church was heavily damaged in the 2007 earthquake, and the new one is, according to our guide, made entirely of concrete. No bricks. This is supposedly an “anti-seismic” design.

I wasn’t totally sold on that… I’m no structural expert and maybe it is an anti-seismic design, but she was saying it like the fact of it being concrete automatically made it anti-seismic. I don’t know that I believe her about any of it, actually. First of all, what an expensive way to build a church! Second, it seems like a strong enough earthquake would still crack the concrete. Third, what a crazy heavy roof! Bricks are usually used not just to save money but also to reduce weight. It seems silly to use all concrete. And I don’t think I was misunderstanding her because of the language barrier (especially since construction/building material vocabulary is my specialty).

This seems like a good place to make a disclaimer that I’m going to say all sorts of things in this post (like “the entire church is made of concrete”), and I make no promises about accuracy. Between the fact that guides make things up all the time and that I could only kind of understand our guide, I actually promise that some things are wrong… count it as a cultural experience because international living is primarily composed of getting things wrong and having no idea what is going on.

We made two food/drink stops that weren’t my favorite, but I’d say that liking 5/7 things on an $11 tour is pretty good. We ate “paciencias” at a bakery. They’re these traditional crunchy cookie things, but they flavor them with oranges which, in case you didn’t know, I despise. Later, we went to a winery, and since I don’t drink, the prospect of “free” wine and Pisco (a traditional Peruvian brandy made by distilling fermented grape juice… yum…) wasn’t particularly exciting. I sniffed all of the wines as part of my campaign to develop sommelier powers without ever actually drinking… and well, they all smelled like wine. I guess I need to keep training. Pisco is one of those things that burns your nose when you sniff it, and to really savor the flavor, you’re supposed to swish it around in your mouth, coating every surface, before you swallow. Julie followed directions, and based on her face and my still-tingling nose, I don’t think I missed out on much.

The other stops were much more my style… weird and quirky. There was a 7-headed palm tree which I don’t quite know how to explain. It’s like the palm tree split from the roots into seven different trunks that are all running along the ground like serpents.

The palm tree technically is in Cachiche, a teeny town right near Ica. Cachiche is “famous” for the witches who sought refuge there after escaping the Inquisition in Europe.

Legends say the tree is so messed up because it was cursed by a witch who was sacrificed there. The last known witch died in the 1980s, and before she did, she predicted that when the palm tree’s seventh head sprouted, Ica would sink. It sprouted in 1998, and that same year, a nearby river overflowed, flooding Ica. Now, the seventh head is trimmed every so often to make sure it doesn’t happen again.

Our next stop was fitting after the visit to the palm tree. We went to the Cachiche “Witch Park” which was just completed in early 2019. It has seven statues of witches, each representing one area of witchcraft: health (medicinal herbs), wisdom (palm and card readings), love (bring a picture of your desired beau, and in three days you’ll be inseparable), money (amulets to bring fortune and find jobs), virility (for man problems, or if a woman couldn’t have kids, she could take a potion and have up to 17! geez), nature (white magic to remove negativity), and huarango (evil and sorcery).

I’m not sure why the evil and sorcery witch is called huarango, but that’s the name of a tree that grows in desert climates, like in Ica. There are huarango trees in the park, some as old as 400 years, and they’re important for preventing erosion in a place where not much else can grow. One of the ones in Witch Park is extra special – you can hug it to make your dreams come true (and then you’re supposed to come back with a thank you offering once it works… the guide gave an example, “like a bracelet!” Very affordable, these witches).

Finally, we were off to the main event of the day – the dune buggy ride and sandboarding!!! I didn’t have any expectations for the dune buggy, but it was so much fun!! We got strapped in, and our driver went zooming up, down, and around the dunes. Julie took a picture of me where I look so happy that I might explode, and that’s pretty much how I felt.

That was even before the sandboarding! We got to do two sandboarding runs each, and Jocelyn and I both spun out on the first one. You’re supposed to put your legs behind you in a V to help you go straight, but I thought it was to slow you down and I didn’t want that! Oh well, live and learn. The second run went better, and even though I was totally coated in sand at the end, it’s possible that I’ve never been happier. My journal that night said it was “literally the best thing of my entire life”. That might be an overstatement. But it also might not be. I can say for sure, at least, that it was absolutely worth the 1-year build up, the 10 hours of round-trip bus ride, and the $11 tour! It would have been worth more than $11 to me standalone, honestly.

That was the end of our tour, and when we got dropped back in Ica, we decided to make one final stop at the Regional Museum of Ica, an archaeology and history museum. They had some cool stuff there, including a whole strange tribute exhibit to my favorite bean, the pallar (pai-ar) (butter bean), but the most interesting was the exhibit about mummies. There were some actual mummies there, and the signs explained how archaeologists can sometimes use the mummies’ bones to determine a person’s cause of death or to learn things about their culture. It was cool and disturbing, which I think is what they’re going for.

Behind the museum, they have a scale model of the Nazca Lines. The model is, of course, still HUGE. I’m a horrible estimator, but I’d say it was at least 20x20m (or more??). And there’s a tower that you can climb up to view it. Since I don’t know if I’ll ever see the actual Nazca Lines, it was fun to experience them on some level.

And that was basically the end of our Ica adventures! We stuffed our faces with pizza and ice cream that night, and the next morning, we headed back to Chilca. The return trip was mostly uneventful, until we had to switch from a bus to a combi (van) for the final leg of our journey. We took the last three available seats, and at the next stop, at least 10 more people loaded on. They were headed to the beach and were carrying coolers and pitchers of ice and other beach paraphernalia. We reasonably had space for maybe four people, so it was like being in a clown car. I haven’t been in such a crowded van since Armenia, and from the way the Peruvians were reacting, it clearly wasn’t a common occurrence for them either. Everyone was thrilled to see us go when we squeezed our way out at our stop, and I’ve never been so happy to see the barren brownness of our neighborhood. Home sweet home. What a way to end the weekend!