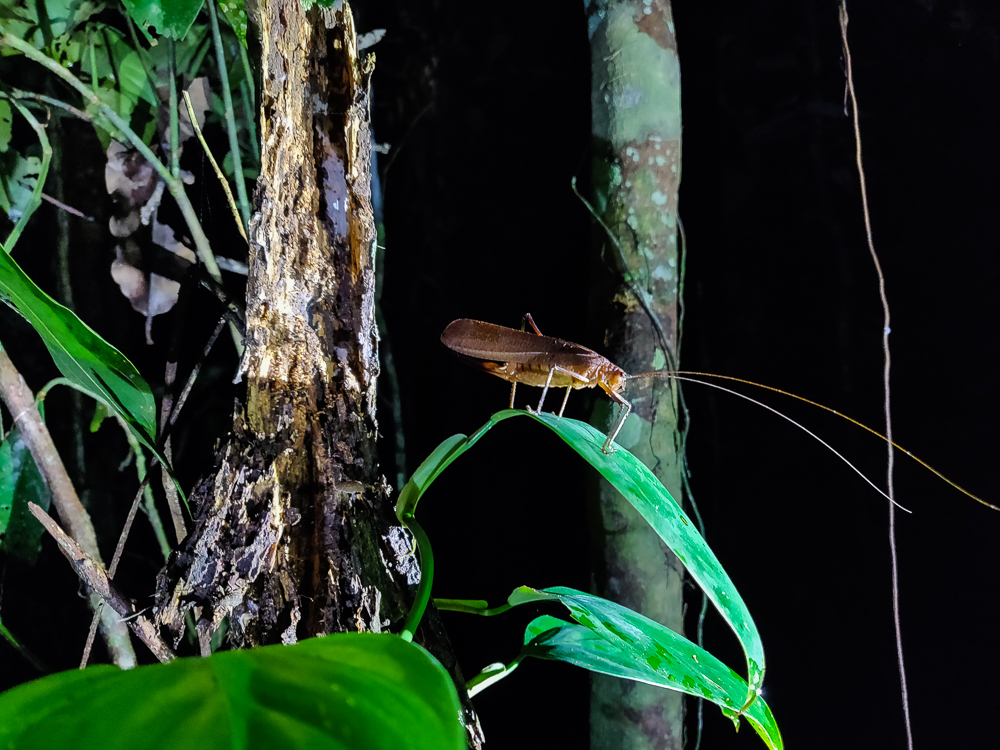 After a morning full of macaws, we had a slightly more relaxed afternoon plan. We were heading to another clay lick, this time one that’s frequented by mammals like jungle pigs, deer, and other herbivores. Unlike the macaws, the mammals’ schedules aren’t so predictable, so Juvenal warned us that there was a good chance we wouldn’t see anything. Oh, well… what can you do? I’ve been working on my patience, so at the very least, I’d get the chance to practice that.

Before we headed out, though, Juvenal showed us how to crack open a Brazil nut pod. Remember when I talked about those? Brazil nut trees are super tall, and the nuts are contained inside large pods that are similar to coconuts. The pods fall to the ground, and that’s how they’re “harvested”, even for commercial purposes. People just gather the ones that have already fallen to the ground.

Juvenal had said that we didn’t want to get knocked in the head by a falling pod, and after witnessing the effort required to break through the hard outer shell to reach the nuts, um… yeah. Definitely not the kind of thing I want hitting my head. He handed us a machete and told us to take a crack at it (hehe he didn’t say it in those exact words, but he should have). Dad went first, and despite his many strong swings, the coconut held strong. I took a few until I felt like there was no progress being made. Mom even hopped in there for a second. And then Dad went back at it until we finally got a hole big enough to squeeze the Brazil nuts through. Geez. It’s quite the undertaking! And then, that’s not even the end! You still have to crack the casings around each of the nuts, though they had a big nutcracker for that so it was much easier than opening the coconut.

The whole thing is fascinating. The coconuts can have anywhere from 10-30 nuts in them, and based on its size, Juvenal guessed that ours had 20. There were 19. What an impressive and yet incredibly useless skill. I didn’t realize until we got it open that I’ve seen Brazil nuts before. Mom used to buy them, and she said that she used to really like them and then decided that they weren’t worth the effort. Ha. And she didn’t even have to open the pod! But I hear ya, Mom. I tried one of the ones we cracked… it was fine. Kind of bitter. I don’t know. I wouldn’t choose them necessarily, but if I was starving or lost in the rainforest, that would probably be the thing I would go for (though then I would almost certainly die because I’m not sure that the energy you get from eating the nuts is greater than the energy you put into accessing them).

After that whole adventure, we headed out into the rainforest to visit the mammal clay lick, about a 30-minute walk from the lodge. There were a few cool things that we came across along the way…

At the clay lick, there’s a “blind” to sit in, a camouflaged hut with a little sliver window to look through so that the animals don’t see you while you’re creeping on them. It was kind of rough in there… hot, unventilated, and not the most ergonomically designed… the window is too high if you’re sitting down and too low if you’re standing up. So if you want to keep an eye on the clay lick, you have to stand in an awkward half-squat the whole time.

Since I’m so young and agile, I took one for the team while Juvenal worked on a Rubik’s cube and Mom and Dad lounged. Mostly there was a lot of nothing, nothing, and nothing. I kept having a feeling that something was going to happen soon, but it was just my optimism at work. No herds of jungle pigs came thundering through the forest, though if they had, I absolutely would be saying right now, “I knew they were coming! I must have some sort of gift.”

Finally, I saw some leaves moving! I couldn’t see the rustler at first, but it seemed unlikely that it was very big. Definitely not pig-sized. At first glimpse, it seemed like it could be a snake? But no, as it got closer, I could see that it was a big lizard! I got everyone up to check it out, and while it wasn’t exactly what we were hoping to see, it was better than nothing! I was content with our creepy forked-tongue lizard.

We headed back to the lodge, had some downtime before dinner, and then had another activity after we ate! They do a “night walk” each day where you walk around the forest at night with a guide, and he points out all of the cool things that you can see more clearly at night. Mom opted out of this one, but Dad and I went and had a great time!

There was a different guide for the night walk, and after about 5 seconds of walking with him, it was clear why he got the job of leading that activity. He LOVED bugs and night things. He was seriously having the time of his life, and even though I am generally not excited about bugs and night things, his enthusiasm was contagious. We were also lucky because we were the only two people in the group which meant that we could ask as many questions as we wanted!

We started out by wading in some ankle-deep water where he pointed out various frogs and their eggs which look like weird jelly-like globs hanging off of branches. While we were still standing in the water, the guide started shining his light on the surface like he was looking for something. I asked what, and he said “caimans”. WHAT. They’re like alligators! I would have thought he was joking, but that didn’t seem like his style. I freaked out a little and he goes, “but just small ones!” OH, JUST SMALL ONES? THAT’S FINE THEN. Um. NOT. Much to his dismay (and my relief), there were no caimans to be found. Except now that I think about it, just because we didn’t see them DOESN’T MEAN THEY WEREN’T THERE. Ahhhh. Now I’m retroactively freaking out which makes no sense, but ahh, I can still imagine standing in that water and now I’m picturing my reaction if a caiman had come and it is decidedly not chill.

ANYWAY, we headed back to dry land, past a large, poisonous spider (no pictures of that, sorry. I practically ran past, as if it was planning to leap through the air at me). I started thinking that maybe it hadn’t been a bad idea for Mom to skip this. We saw a bunch of other bugs… grasshoppers and a scorpion spider and crickets maybe? I don’t know. They’re all just bugs to me. I also spotted a little red snake on a tree.

Then, this was crazy… the guide turned on a blacklight, and it made a little scorpion glow bright green! There’s something in their exoskeletons that glows in blacklights, though no one knows exactly what the purpose is. When it was glowing, it was incredibly obvious because everything around it was that regular, blacklight purple. Then, he switched back to normal light, and we could barely see it because it was brown and so was everything around it.

The best part was when the guide told us to turn our lights off and wait. We stood there in the dark for about a minute before these little glowing things slowly started to appear at the base of the tree near us! Glowworms! Like, what the heck?? Nature is insane!

Mom was asleep when we got back, and it didn’t take long for the two of us to join her. It had been a VERY long day! Thankfully, we didn’t have quite as early of a start the next day, though we still weren’t “sleeping in” by any stretch of the imagination.