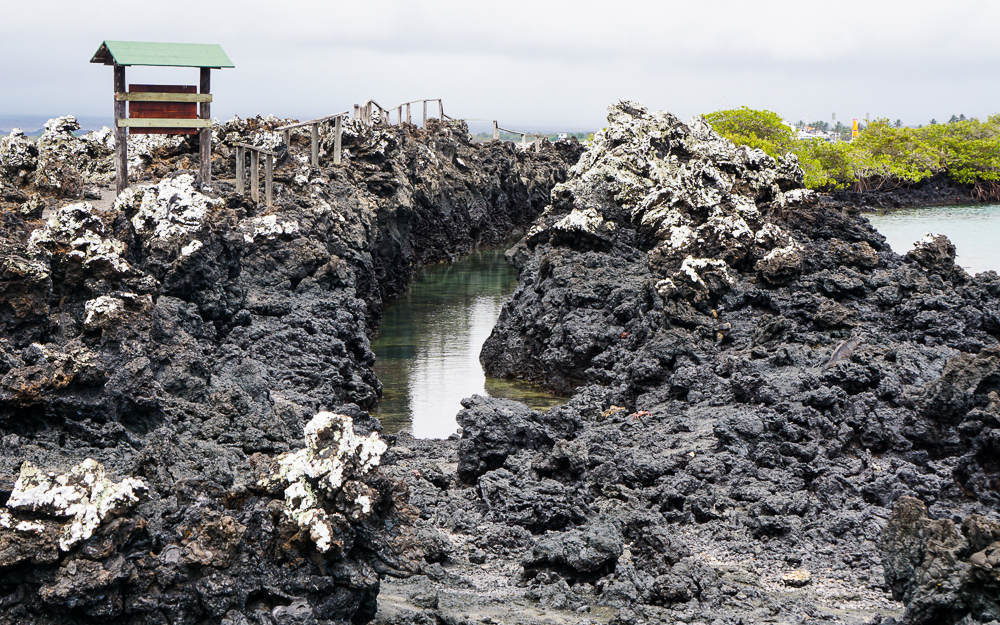 Welcome to Isabela Island! After our few days on Santa Cruz, we relocated one final time to Isabela, the largest island in the Galapagos. We’ll talk more about Isabela in the next few posts, but our first day’s adventures started just off the southern coast of the island in a small group of islets called “Las Tintoreras”. The islands are named for the white-tip reef sharks that can be found in abundance in the surrounding waters, or tintoreras in Spanish.

We had a “late” start to the day… our tour pickup was scheduled for 9AM which was a welcome change from the usual 7:30AM and earlier departures that we were used to. We actually had time to eat breakfast without having to just shovel food into our mouths while running out the door! What a luxury!

We also had a much shorter boat ride, which my stomach wasn’t upset about (hehehe get it?). We loaded up and were at the little islands in under 20 minutes.

Along the way, we saw a couple of penguins! Most of the penguins in the Galapagos are located at the western end of the archipelago. If you recall from my intro to the Galapagos post (and even if you don’t), there are a bunch of different currents that converge on the islands. The Cromwell Current, an upswell current from the west, brings cold water from the ocean depths, helping to create a viable environment for the Galapagos penguins. They still have to be careful not to overheat, but in the case of the penguins that live around Las Tintoreras, they’re helped by the many lava caves and crevices along the coast which they use to hide from the hot sun.

Galapagos penguins are endemic, meaning they only exist in the Galapagos, and are the second smallest penguin species in the world! They’re only about 20” (50cm) tall and weigh about 5-10 pounds (2.5-4.5kg). They also have the distinction of being the only penguins that live north of the equator! Most of them live in the southern hemisphere, but since the equator passes through the Galapagos, the tippy top of Isabela Island/penguin country is actually in the northern hemisphere. Made it by a hair! They eat mostly anchovies, sardines, and mullet and can swim at speeds up to 20mph (35kph) underwater while hunting!

Like other penguins, Galapagos penguins mate for life. They can mate up to three times per year, but this really depends on the availability of food. In years with extreme weather and food shortages, like El Niño years, the penguins forgo breeding or abandon their young. This means that their populations are seriously threatened by climate change. They’re endangered, with the current population estimated at fewer than 2,000 penguins.

We went ashore on the largest islet, and I was amazed by how different the landscape is from Isabela, especially when the islands are so close to one another. Some people say that Las Tintoreras looks like another planet, and I’d have to agree. The landscape is dominated by funky black and reddish lava formations coated with white and green lichens on one side due to the prevailing winds.

One of the highlights of the tour is “shark alley”, a volcanic crack filled with shallow water where sharks apparently like to hang out and rest during the day before they go out to hunt at night. It’s said to be the best way to see sharks in the Galapagos without being in the water with them, but unfortunately, we weren’t lucky enough to see any. Even so, it was cool to watch the little fish hanging out in the shallow water. You can practically look straight down into the water from above! I can see why it would be super cool if a shark was there.

There are also a TON of marine iguanas lying around. They always seem to be lounging in groups, and that’s because they form colonies of usually 20-500 iguanas but up to 1,000! We’ve seen marine iguanas before, but I haven’t explained much about them. They’re unique because they’re the only lizards in the WORLD that are adapted to a marine existence. They’re vegetarians and eat algae and seaweed. Most of them get their food from shallow areas at low tide, but larger males will actually go diving for algae! They can hold their breath for up to an hour and dive down to 65 feet (20m) below the surface.

Research has shown that they probably share a common ancestor with the Galapagos land iguanas, genetically diverging around 4.5 million years ago to become a new species. They’re different from land iguanas in a few key ways that make marine life possible. They have long, sharp claws to help them cling to rocks, resisting the tides near the shore or underwater. Their tails are flatter which makes them more effective rudders while swimming. Their dark coloring helps them to warm up in the sun after coming out of the cold Galapagos waters. Flat noses and sharp teeth make it easier to scrape algae off of rocks. They also have a special gland that removes excess salt from their blood, a necessity when eating salty algae and seaweed! It’s expelled by a sneeze-like action, and it’s not uncommon to see marine iguanas with salt-encrusted faces. Aren’t they fascinating??

One thing that marine iguanas are NOT is pretty. They were called “imps of darkness” back in the day, and Charles Darwin described them as “hideous-looking” and the “most disgusting, clumsy lizards”. Ouch! It’s true, though. On land, they are horribly clumsy, but in the water, they are incredibly graceful!

Weirdly, even with these many adaptations, it is possible, if uncommon, for land iguanas and marine iguanas to mate. There are some “hybrid iguanas” which generally have a marine iguana father and land iguana mother. Most live on South Plaza Island, a small, skinny island near Santa Cruz. It has been observed that in years when algae and seaweed are scarce, marine iguanas will search for food farther inland. On such a small island, it’s much more likely that the land and marine iguanas will cross paths. Sometimes, a male marine iguana will come across a female land iguana who is still fertile, and voila! A baby hybrid iguana is born. The hybrid iguanas are infertile and have some qualities of each parent… they usually stay on land, but they have the sharp claws of marine iguanas, making it possible to climb cacti for food. Their coloring is unique, usually dark with light speckles and a banded body which is different from both marine and land iguanas.

Anyway, back to marine iguanas. The males can get territorial, especially during mating season, and they engage in headbutting competitions if their initial head bob/body stiffening/mouth opening isn’t enough to scare off the invader. These headbutt fights can last for hours and include breaks. Usually, neither iguana is injured (except for pride-wise), but in rare cases, there could be biting and scratching.

We were lucky to catch the tail end (hehe) of an iguana fight, and my cousin took this awesome video from the boat (if you listen to the audio, you’ll hear that I put my money on the underdog, and he won!).

The tour also included some snorkeling time, and this was probably my favorite snorkeling of the whole trip. We got to see so many things! We were in a big, sheltered area, so the water was calm and without any strong tides. It was about 7-10ft (2-3m) deep which was perfect. There was enough space to maneuver, but you could still dive down to the bottom easily. Also, the water was incredibly clear, partly because the bottom was far enough away that people weren’t kicking sand and such up into the water.

We saw all sorts of awesome things! There was a lobster, one of those ginormous red spiny lobsters, ambling along. It looked like a satellite, there were so many antennae and appendages coming out of it. There was A LOT happening on the bottom… starfish and sea urchins and anemones and mostly things that I don’t actually know what they are, but they were pretty! There were sea turtles and a LOT of fish. I swam around with these huge schools of razor surgeonfish (I think) and pretended I was one of them. And I swam next to a marine iguana!

Here’s another video that I didn’t take (shout out to my cousin and uncle who manned the underwater camera and GoPro long after I decided I was finished taking my phone into the water with me) showing a marine iguana swimming!

The coolest thing? I SAW A SHARK!! It was probably 12ft (4m) away from me, and it was maybe 3ft (1m) long. I was alone, and I started yelling and trying to get anyone else’s attention so that I wouldn’t be the only one who saw it. I should have just swum after it because only one person even heard me/paid attention… but I was so happy! I saw a shark and wasn’t terrified! I was just excited!

I felt like my day was complete after that! Man, what a rush! The tour was definitely what I would call “short and sweet” because we saw all of that and then were back on Isabela by noon! That’s crazy. We still had more adventures ahead which I’ll talk about next time!

Las Grietas and Los Gemelos – check out my other favorite snorkel spot in the Galapagos, Las Grietas!

North Seymour Island – take a look at the Galapagos land iguanas and imagine what a hybrid iguana might look like.