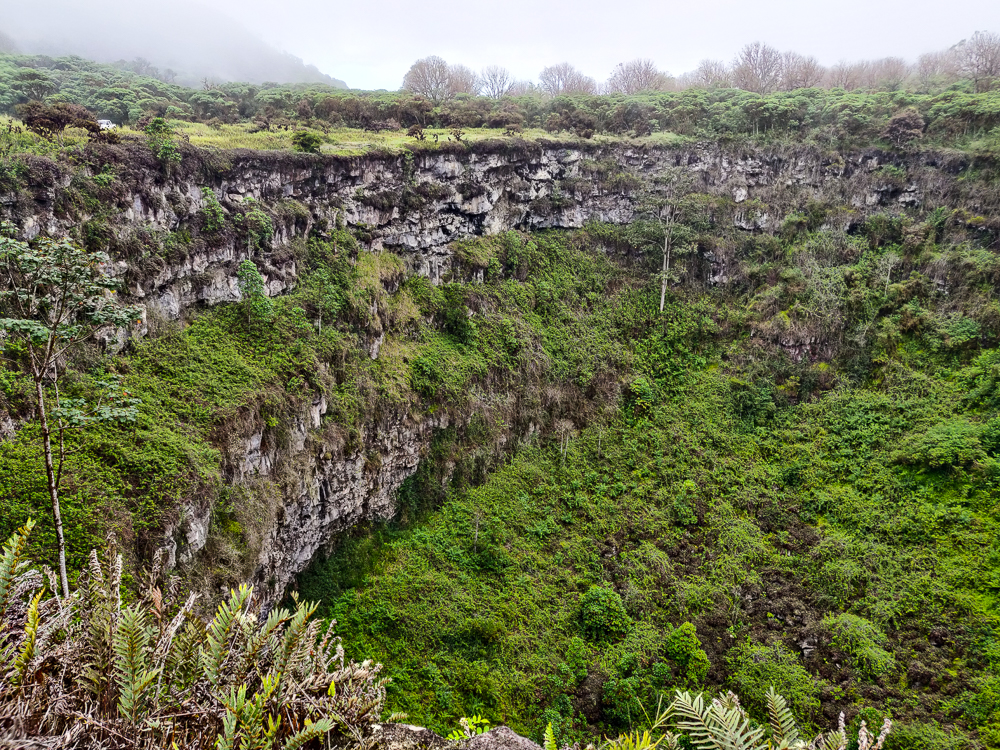 We had one “free day” worked into the schedule while we were on Santa Cruz, and like before, that didn’t mean “do nothing day”. My aunt had a whole list of things that we could see on the island without a tour, so we plotted a route and headed out for another very long day.

Santa Cruz is the second largest island in the Galapagos archipelago and is a “shield volcano”, like many of the other Galapagos islands. This means that there wasn’t an explosive eruption that formed it (exactly what it sounds like/what you likely imagine when you think “volcanic eruption”). Instead, there was an “effusive eruption” which means that low-viscosity lava flowed steadily for a period of time. Since the lava is extra “flowy”, it spreads out farther and results in a land mass with a much more gradual slope than would result from an explosive eruption. So lava steadily accumulates in layers, building a short and flat-ish island, called a “shield volcano” because it has a similar shape to a round shield lying on the ground.

It’s a very ecologically diverse island, the only one in the Galapagos with six different vegetation zones. I was amazed once again by the difference between the coastal areas and the highlands, but we’ll get to that later. Anyway…

Our first stop was the local fish market. This is where the fishermen bring in their catches, and there are big, concrete tables where they’re sorted and prepared for sale. If you like fresh fish or lobster, this is the place to be. I personally don’t like fish, fresh or otherwise, but I do always enjoy watching people at work (in a totally non-creepy way), skillfully going about their business. The major tourist draw is the photo op, of course. The fish attract all kinds of critters hoping for scraps… sea lions and an assortment of birds that hang around and, if they’re feeling especially cheeky, try to snatch fish right off the tables. The fish attract the birds, the birds attract the people, and you’ve got yourself a crowd!

We weren’t there at prime time, so things were pretty quiet. That was fine with me! When everyone was ready to move on to the next adventure, we headed for the dock. Our destination was “Las Grietas”, or “the cracks”, which is a deep crevice that was created when the lava forming the island cooled and contracted. This particular crack falls at the junction of an underground river and the sea, so it’s filled with brackish water (mix between fresh and saltwater). There isn’t a large, clear passage to the ocean, but there is enough space for water and fish to trickle in. No sharks, though!

The only way for a human to get to Las Grietas is through a boat ride/walking combination. You can’t drive there. You can’t walk the entire way. You can’t boat the entire way. You take a water taxi from the main dock in Puerto Ayora, cross the harbor, and walk about 30 minutes from there. You can also take a boat a liiittle farther and save yourself maybe 15 minutes of walking, but then you still have to walk the final stretch.

Las Grietas is about 330ft/100m long and consists of three “pools”. As I researched, it seemed like everyone (everyone who seemed even mildly adventurous, that is) agreed that you should absolutely go all the way to the third pool. My uncle, cousin, and I geared up in our fins and snorkels and headed down a set of wooden stairs to the first pool. This is the biggest one (at least in my estimation), and it’s crowded because that’s as far as most people go. Not us! There’s not much to see in the first pool, so we swam to the end pretty quickly. From there, we climbed over a section of slippery rocks (only falling once… eh, maybe twice… but always very gracefully, of course) into the small, rocky, shallow second puddle (it’s way too small and shallow to be called a pool, so I’m amending the name). If I didn’t know better, I would have thought we’d reached the end. But no.

To reach the third pool, you can either climb over some large boulders or swim about 5 feet through an underwater “tunnel” beneath them. The tunnel route is way easier, but at the time, we didn’t know that was an option. (I think it’s semi-common knowledge, so I’ll take the blame for that intelligence failure.) We only found it by chance. At the rocky transition from the first pool into the second, I tossed my fins ahead so that I could use my hands as I crossed over the rocks… and when I reached the puddle, one of them had vanished. Uh oh. They’re bright orange floating fins, so I knew it had to be on the surface, but then why couldn’t I see it?? After some minor panicking and intense searching, I found it wedged between two rocks. There was clearly a current that carried it there, and a quick peek underwater revealed the tunnel! So, it was two exciting discoveries in one. I got my fin back, and we found an easier route into the third pool! My uncle had already scaled the boulders to get there… whoops! But at least the return trip was easier.

Well, it was quite the journey, but we finally made it to the third pool. It’s slightly smaller than the first, but we had it all to ourselves. It was awesome. The water was incredibly clear and calm, all the way to the bottom, maybe 10-15ft (3-5m) down. As soon as we passed that last boulder wall, it was like the world around us ceased to exist. Underwater, the silence was the ear equivalent of being in a pitch-black room. And then the fish! Everyone said that there’s not much to see underwater, but I disagree. Sure, there were no sharks or turtles, but there were a few schools of BIG fish cruising around… like at least a foot long (30cm), and many of them were probably bigger than that. The best part was that they were almost completely unfazed by us. I dove down and swam along next to them. They looked surreal… like they were mechanical fish or were too three-dimensional to be real. And just the general ambiance… I don’t know exactly how to explain the feeling, but from now on, if I need to imagine a place where I feel completely at peace, I’m going to be there, suspended on the surface of the clearest, quietest water with hyper-realistic fish gliding by.

We had the pool to ourselves for a while, and it was glorious. By the time another group showed up (and completely shattered the serenity), we were about ready to go anyway. We made our way back under the boulder, through the puddle, over the slippery rocks, across the first pool, and up the stairs (which were now about a million degrees after baking in the sun… and I had no shoes at the bottom so that was really great planning on my part).

After a quick stop at our hotel, we headed back out in search of a (regular) taxi to take us to the highlands. On Santa Cruz, people generally go to see two things in the highlands: a tortoise sanctuary (of course) and a pair of craters called Los Gemelos. Fredy, our taxi driver, suggested that we visit Los Gemelos first, and I figured he knew better than any of us since he’s probably taken people to both places a million times.

Los Gemelos, or “the twins”, are two craters formed by collapsed magma chambers. What are those? When lava is flowing, it flows fastest at the middle. The lava at the top and edges cools and hardens more quickly while the lava beneath continues to flow. Eventually, the eruption stops, halting the supply of lava and leaving behind empty space beneath the hardened lava. This can take the form of a tube-like cavity (lava tubes) or, in the case of the craters, large, open chambers. At Los Gemelos, through a combination of erosion and seismic activity, the unsupported lava above the chambers became unstable and collapsed, forming the twin “craters” that you can visit today.

None of us really knew what to expect from Los Gemelos, but they were really cool! It’s like being in another universe because they’re in the middle of the largest Scalesia forest in the Galapagos. This is an important habitat for tropical flowers like bromeliads and orchids as well as mosses, lichens (a fungus/algae mashup), and birds. It feels like you’re in the middle of the rainforest! Since the craters collapsed a long time ago, they’ve filled in with plants as well.

After our hike around the craters, we loaded back into the taxi and headed to El Chato, one of the private tortoise reserves on Santa Cruz. It used to be a ranch, but for the last 20 years or so, they’ve been working to restore native vegetation and create a natural habitat for the tortoises (more about that in the next post!). Tortoises aside, they also have some lava tubes that you can walk through! It’s kind of creepy to think that you’re walking through a giant pipe where hot-enough-to-vaporize-you lava used to flow! But also… how cool!?

Next time, we’ll talk about the tortoises at El Chato and some final Santa Cruz adventures!

San Cristobal Highlands – compare the Scalesia forest and lava craters of Santa Cruz to the highlands and crater lake of San Cristobal!

Kicker Rock – snorkel in the open ocean surrounded by some very NOT clear water (and probably over a bunch of sharks… eek!)