Our final group activity of Saturday was a visit to Cape Coast Castle. Now, before you start picturing the awesome stone castles in Europe and imagining kings and queens walking through tapestry-draped hallways, I have to stop you. This was not that kind of castle. Cape Coast Castle is one of about 40 “castles” (forts) that were built in what is now Ghana by foreign powers to support trade. Originally, people were drawn to Ghana because of gold, but as the slave trade picked up, the castle was modified to imprison slaves rather than to store goods.

I want to talk about what I learned during our visit. It’s kind of long and all of it is horrible, but it’s also important. I always remind myself that I can’t ignore things just because they make me feel upset or uncomfortable, and I can’t allow myself to separate my emotions from what I learn. How am I supposed to try to understand people who are different from me if I only want to hear about the happy things and not the ones that have scarred and changed them forever? How can I understand where they’re coming from if I haven’t tried my best to imagine what it would feel like to be in their shoes?

During the slave trade, people were taken from all over Ghana and from as far north as Burkina Faso (the country that borders Ghana to the north). Some of them were prisoners of war that were sold off, some were people whose entire villages had been raided and captured. They were brought to the castle, shackled, and crammed into disgusting chambers in the basement where they could remain for days, weeks, or in some cases, up to three months. They were brought out once each day to eat, unless they were labeled as dangerous, in which case they remained in the dungeons constantly.

The men’s chamber has three rooms in which up to about 1,000 men were kept at once. There wasn’t room to sit or lay down. There were some trenches cut into the floors that were supposed to be used to carry human waste out, but they didn’t function very well and everything eventually just piled up. Our tour guide talked about how only one of the chambers was “excavated”, and it took me a second to understand what he meant. Oh. So in the other two men’s chambers, the floors are covered with fossilized human waste. Without the excavated room, I wouldn’t have even noticed that there was a trench in the floor.

The women’s chamber has two rooms and was used to hold up to 500 women at once. The conditions were similar to the men’s chamber, but the women also had to worry about getting raped by their captors. Rebellious women were placed in a small confinement cell to more quickly break their spirits.

There’s no way that I can adequately describe how it felt in those rooms. The air was completely stagnant. The only light came from tiny windows maybe 15 feet up, but it wasn’t enough to see anything. I felt like the walls were closing in on me, and I’m not even claustrophobic. All of that was enough to make me a bit nauseous, and I didn’t even have people standing that close to me.

The worst room we visited was the suffocation chamber. It’s exactly what it sounds like – the punishment for the most rebellious. There used to be three doors sealing the room, but only one remains, and it has a grate that lets air in. When our whole group was inside, our guide turned off the light and closed the door to give us a sense of what it would feel like to be trapped in there. Even with just one door, I could feel myself starting to panic. The air was heavy and it smelled like moisture and mold. You literally could not see anything. He opened the door after maybe 20 seconds, but that was more than enough time to get the point across. When someone was placed in the room to be killed, it could take up to 5 days for them to lose consciousness.

As you might imagine, under these conditions, about 25% of people died before even leaving the castle. The ones that were “lucky” enough to survive were then sorted when a ship came into port. The strong were loaded onto the ship, and the weak were left in the dungeons to die. About 50% of the “strong” remaining people did not survive the trip across the Atlantic.

One of the questions our group asked was – wouldn’t it have been in the best interests of the businesses to take better care of people so that more survived? Between insurance money and the profit made from selling people who did survive the trip, they still came out in the positives. The money made from the sale of one slave would cover the deaths of 20 others. Then, knowing all of that, the captors didn’t want to make conditions any better because part of the purpose of the dungeons was to break people psychologically.

The last part of the tour was walking through the upstairs part of the castle. The governor’s quarters. For one man, there was close to the same amount of square footage that was used to house 1,500 people below. From upstairs, the views of the gulf were beautiful, but it’s hard to enjoy the view when you compare that with the very different scene that is just below your feet. 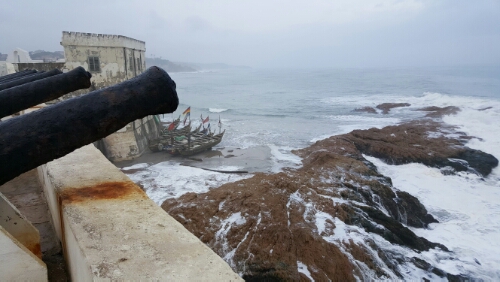 At the end, I was feeling pretty empty inside. The entire time, I just kept thinking “how??” How could anyone think it’s okay to treat people that way? How did they get others to go along with them? I guess once you manage to convince yourself that some people deserve less or are worth less or are less human than you are, it’s easy to treat them that way.

It’s not exactly pleasant to have all of these thoughts swirling around, but I know that it’s good for me. These things happened, and it doesn’t help anyone if I ignore them or pretend that they didn’t. I still definitely have a lot to think about and reflect on before I can sort things out in my head again.