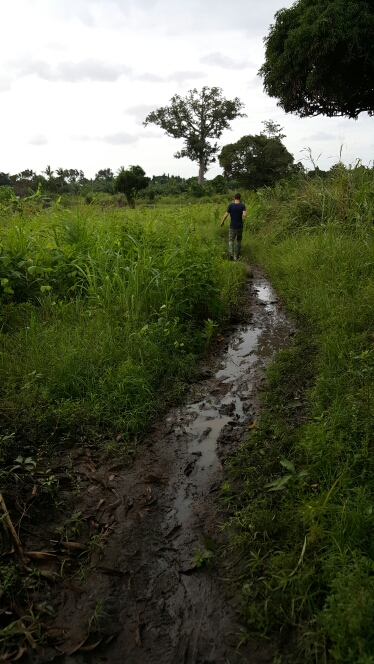 Today included the first of a long string of goodbyes coming in the next week, and I can’t even begin to explain how much I am NOT looking forward to it. Sosane left today, and it’s really bumming me out. Time here simultaneously moves quickly and slowly (and no, that doesn’t average out to it moving at normal speed). It moves slowly because after spending three weeks with someone, it feels like you’ve known them for a lifetime, but it moves quickly because before you know it, your friend is packing his or her bags and getting on a tro to the airport.


This morning started off with another phone call for Amber, this time at a more acceptable hour. Her phone rang at 5AM with news of another delivery at the clinic, so she sprinted out the door and left Nico and me to go to the farm without her.

The path to the farm was still a total mess. It always has parts where there’s some mud or a puddle to walk through, but now practically the entire path is little puddles and goopy mud. I think it’s going to rain more frequently in the coming weeks, so who knows if the ground will ever dry out and get back to how it used to be.


Nico and I had another exciting morning of shucking and fighting off the farm chickens. It’s crazy – they just keep getting more and more aggressive and cheeky! Usually, the chickens hover but keep their distance. Today, they did whatever they wanted! It was like we weren’t even there. We throw the shucked ears of corn into a big basket, and there were a couple of times when a chicken literally jumped into the basket to try to eat the good corn! We try to threaten them and scare them away, but they barely even flinch anymore. Little monsters.
Schools were closed today because it’s Founders’ Day, a national holiday. I don’t know that most people here even know what the holiday is for, but it’s celebrating the founding fathers of Ghana. It takes place each year on September 21st, the birthday of Ghana’s first president, Dr. Kwame Nkrumah. One of the kids in the junior high was using the day off to study his science notes, so I sat with him for the morning, read a book, and answered any questions he had as they came up. The more time I spend here, the more amazed I am that the students manage to learn as much as they do. The schools have textbooks, but the kids can’t take them home, so anything they want to study has to be copied from the textbooks into their personal notebooks. Then, since there’s no library or internet, anything that’s confusing just stays confusing because there isn’t any way to get more information about a topic besides having someone teach you. As if learning wasn’t already challenging enough!
Anyway, after lunch, Sosane showed up in the common area with her suitcases packed, and I was so confused. Her flight isn’t until tomorrow, but she has some things to do in Accra before she leaves. I guess I knew that she was still deciding between leaving today or tomorrow, but I had convinced myself that she would stay. Surprise, I was wrong.

I know she did it that way on purpose because she didn’t want people to make a big deal about her leaving. I understand, but I’m still kind feeling like “what just happened?” At least I can console myself with the knowledge that I’m going to see her in November. I’m staying in London for a week on my way back home, and she promised that she’ll come hang out!