Welcome to Tbilisi! I know it probably felt like we were never going to make it, but here we are! Despite our late-night arrival, I was determined not to waste any time! I woke up at 8 on Saturday, took a shower, got dressed, and returned to the room to find everyone else still passed out. It didn’t look like they were getting up anytime soon, so I sent them messages saying I was out for a walk and to text me when they were awake. After getting a map from the front desk, I set off with no plans beyond walking generally south where I knew I’d eventually hit a river.

First reaction: It was weird being in a foreign country that wasn’t Armenia. It made me realize how comfortable I’ve gotten here! Yes, I can’t have an in-depth conversation in Armenian (or even a non-in-depth conversation about anything besides where I’m from, what foods I ate today, or whether or not I’m married), but I can at least say enough to find my way around, say hello and thank you, and feel like I’m not a mute. I hate having to rely on other people being able to speak English because it makes me feel like a bum… I guess, though, that’s mostly because English is my first language. If my first language was Spanish and I knew English to help me when I travelled, I wouldn’t feel like I was just expecting everyone to cater to me. I would feel like we were speaking the international language of travel. But alas, English is my native language, and it doesn’t matter how many other languages I learn if I’m not in a country that speaks one of them.

I tried to learn a few basic Georgian phrases, but I forgot how hard it is to remember things when you’re not used to the sounds. It’s almost better to not know how to say “hello” in the local language because then people know immediately that they need to speak to you in English. I guess after that you can say, “Do you speak English?” but I only like to do that if I can say it in the language. Too many words, so I focused my efforts on “thank you” and “excuse me”. It never really clicked… my default now when I hear other people speaking a non-English language is to start speaking Armenian, and I had to fight against that reflex the whole weekend.

Anyway, my first impression of Tbilisi was that it’s not so different from Armenia. Maybe that’s because, if you remember from my Armenian Inventions post, Armenians built Tbilisi. It is true that there was a significant Armenian population in Tbilisi at some points in history (in the early 1800s the city was almost 75% Armenian), but who knows how much the Armenians can factually take credit for. I mean, practically, they’re happy to take credit for all of it. Factually, I’m not sure.

One big difference between Tbilisi and Yerevan is the river. The Kura River runs right through the center of the city, and it makes everything look a thousand times cooler. It’s also not super flat there, so the city is naturally more visually interesting. There are some skyscrapers and a few examples of weird modern architecture, making it feel more western. What’s a modern city without weird, modern buildings, right?

After wandering around for almost an hour, I made my way back to the hostel to check on my friends. They were just about ready for breakfast, and after eating, we headed back out onto the streets. Since I basically knew my way around the whole city by then, I was in charge of sightseeing destinations and navigation (though the latter is mostly because I had functional maps on my phone). We walked around a bit just to get a feel for the city before taking a cable car up Sololaki Hill to see Kartlis Deda, Narikala Fortress, and the National Botanical Garden.

Kartlis Deda is basically Georgia’s “Mother Armenia” equivalent (so… Mother Georgia). She was erected to celebrate Tbilisi’s 1500th birthday, and she has a bowl of wine in one hand for those who come as friends and a sword in the other for those who come as enemies. There’s also a fantastic view of the city from there, and after taking a million of the same picture, we headed to the fortress.

Narikala Fortress was established in the 4th century by the Persians. Since then, it was expanded and repaired in the 7th and 8th centuries, the 11th, and the 16th and 17th, all by different people… you know, whoever had control of Georgia at the moment. So basically, who knows what the heck it looked like in the 4th century, but it sure didn’t look like it does now.

The fortress is awesome!! It’s probably one of my favorite things that we saw all weekend. We should have just waited until we got there for our view of the city! I love the places where you can go and climb around on things and no one’s yelling at you or telling you not to go somewhere, and this was one of those. No entrance fee, no security people. Just the expectation that you’re not going to do anything stupid. Ah, the expectation of common sense is so rare these days.

We took our time wandering around and investigating as many nooks and crannies as we could find. There’s also a church in the center that was built in the 1990s to replace the previous one which burned down. It was beautiful on the inside (paintings galore!), but I don’t know what they were thinking when they picked the stone for the outside. It kind of looks like it was made of plywood. Ick. 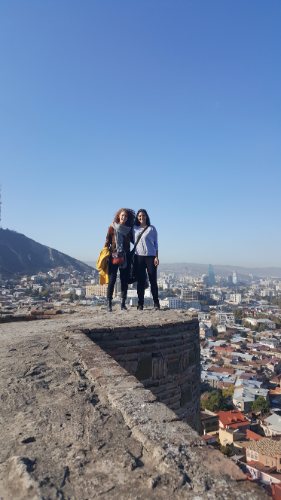 From there, we walked down the hill with nothing more than a general direction to guide us (probably everyone else thought that I was actually leading the group based on the map or some plan, but they say ignorance is bliss, so sometimes there’s no reason to burst that bubble). By chance, we stumbled upon one of the two functional Armenian churches left in the city, St. George’s Cathedral.

There’s some disagreement about when St. George’s was built, so we’ll say it was maybe built in the 13th century and that maybe there was a 7th-century church there before that. It’s also the seat of the Georgian Diocese of the Armenian Apostolic Church and, which in my opinion should be the church’s biggest claim to fame, the burial location of Sayat Nova! He’s the namesake of about 50% of the streets in Armenia and was a poet and musician who, though he lived in Georgia, was Armenian. And don’t you ever forget it! HE WAS ARMENIAN.

I know, I got distracted again. Back to the church. It has a brick/stucco exterior, common to churches in Georgia, and the inside is covered in murals. It was interesting to see how different it is from churches in Armenia. Everything is way more ornate than in most churches here, and the murals are extensive. I could tell that all of us felt at ease there, maybe because we felt like we were among people with whom we could actually communicate. Oh, the luxury.

After our brief taste of home, we were off again, trekking through the streets in a semi-planned direction. Our next stop was Juma Mosque… which may or may not have been the mosque I was aiming for, but no one has to know that. I actually don’t even know. There are two mosques on the map, and we made it to one, so that’s called a success. (I want to clarify the fact I CAN read a map. The issue, which I can refer to you my university cartography professor to hear about in more detail if you’re interested, is these darn tourist maps that try to be all artsy and end up making a map that’s barely usable because things don’t actually show in the right places. Isn’t the whole POINT of a map to show things in the right places??)

The mosque is plain looking from the outside, just a simple brick building, and we would have completely missed it if the doors weren’t open. The inside, on the other hand, is spectacular. The ceilings, the walls, the everythings were beautiful. I’m a big fan of blue, and it seems like that’s a popular color when it comes to mosque decorations. I was curious about the reason behind that, so I looked it up. It doesn’t look like there’s any connection between Islam and blue, but in the Middle East, blue represents safety and protection as well as immortality, spirituality, and heaven. Those seem like some pretty good reasons to pick blue for the primary color in a religious building! I don’t usually think much about it, but the psychology of colors is interesting. Blue does suggest a kind of peacefulness that seems appropriate in the worship context. Hm.

I’m going to give you some time to ponder color psychology, mostly so that I don’t include a full novel in one post. If you’re busy, you can go do your busy person things. If not, look up the meanings of colors in different cultures. It’s interesting, I promise. If you’re into that kind of thing.