I had a brilliant idea to maximize my sightseeing efficiency in Batumi: a sightseeing run. In hindsight, I see the million flaws with this idea and also the million better options, but I didn’t see those at the time, so here we are.

What is a sightseeing run, you ask? Well, exactly what it sounds like. Go for a run, stop at any sights, keep running. I thought this sounded like a perfect idea because I wanted to work out, I wanted to go sightseeing, and sometimes, I feel like walking between sights just takes too long. I planned to run along the boulevard by the beach so that I didn’t have to deal with cars and could have nice views of the water along the way.

Since I’ve given you no real information about Batumi yet, here’s a little background for you. Like I briefly mentioned, Batumi is the major beach resort of Georgia, located on the western side of the country along the Black Sea. It’s the second-largest city in Georgia after the capital city, Tbilisi, and its economy is centered around tourism, gambling, and its port which is the biggest in Georgia. 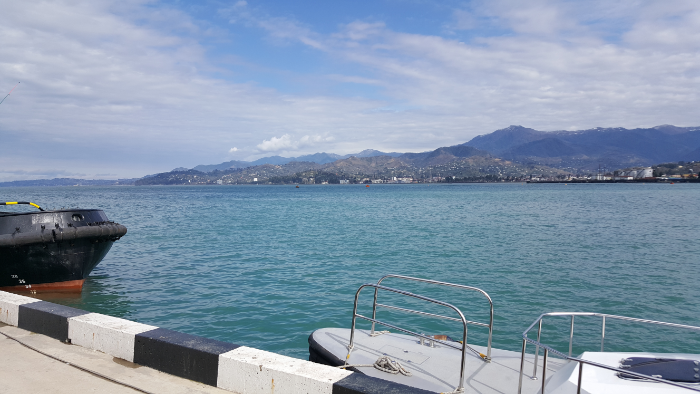 Historically, the first record of a city on the site of Batumi was an ancient Greek city, Bathus, in the 4th century BC. The Romans conquered it in the 2nd century AD, and after that, it went through a series of rulers along with the rest of the cities in the region.

Architecturally, the city is particularly interesting. This is something I absolutely didn’t expect going in and was pleasantly surprised by (though of course, I knew nothing going in, so it’s not very surprising that I wasn’t ready for what I found). Many of the buildings are from the 19th century and are a mix of different styles: European and Asian, Georgian, Turkish, and Soviet, etc. There’s also a strong sea theme, so you can see a lot of mythical sea creatures woven into the architectural details. And the colors! There are so many pretty and unexpected colors.

Recently, there’s been a push to grow Batumi, and these historic buildings have been joined by new, modern high-rise buildings. It was already a strange architectural mash-up, and now it’s even more so. Just wait… you’ll see what I mean in the pictures.

Okay, back to my sightseeing run. I hadn’t worked out in quite a while, so I thought maybe three miles (5k) or so would be a good start (I’m not a good runner AT ALL, so even this was kind of a stretch). Plus, with the sightseeing component, it allowed for “photo stops” aka “find something to take a photo of because you don’t want to run anymore” stops. It seemed like a good way to ease back into running. Maybe it would have been, too, but after I had gone two miles and hadn’t turned around yet, I saw some mountains in the distance and decided that I wanted to be closer to them. Very specific, I know. So, I kept going, and I kept thinking that I was going to reach the point where I had some epic mountain view and would know that it was time to turn around and go back.

The path was nice, too. It went right along the beach, there were interesting buildings to look at, and there were barely any other people around. Then, somehow I was more than four miles away from home and seemingly no closer to the mountains. I could have kept going. I kept thinking that if I just went a litttttttle farther, I would hit a good spot to turn around after the next bend. Or the next bend. Or the next bend. That maybe would have been fine, but I did NOT plan ahead for that kind of adventure and was carrying no money and no bus ticket. Not my brightest moment. Note to self: always bring bus money.

Finally, I had to accept that if I hadn’t gotten a good view of the mountains yet, it probably wasn’t going to happen and that I needed to turn back or risk collapsing from exhaustion. Oh yeah, I also didn’t bring any water. Or money to buy water. And I had only eaten a granola bar for breakfast. I know, I know, but remember that I was planning for a two- to three-mile jog/walk/stop, not an almost nine-mile (15k) adventure. Hehe. Oops.

My post-experience thoughts about this whole thing:

After I got back to the hostel, cooled down, drank some water, and ate something, I changed and went out again because despite the ridiculous distance I had covered, I had only seen the sights along the coast and still had the entire downtown area to check out. This time, I aggressively plotted my route to avoid covering any extra distance, and off I went.

I did NOT want to leave the hostel again after I got back and sat down, but it was my last day in Batumi, so I didn’t feel like I had a choice. My legs were killing me, and I walked at an impressively slow pace the entire time.

My loop around the city included a whole pile of churches, whatever parks I happened to stumble upon (because who doesn’t like parks??), some city squares, and a few of the tall buildings that I didn’t get to on my “run”. I’ll let the pictures speak for themselves for the most part because it’s not even worth me trying to explain without visual aids! 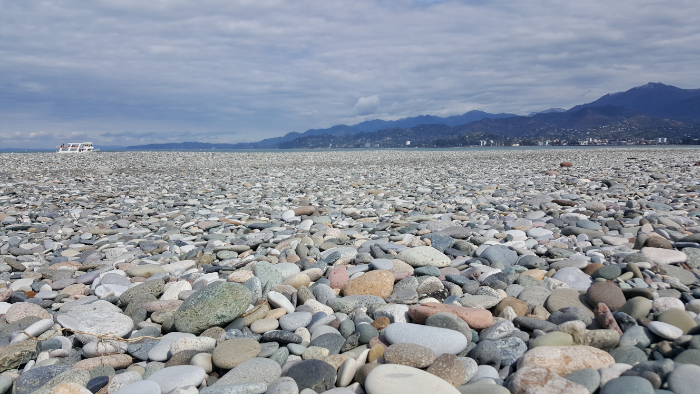 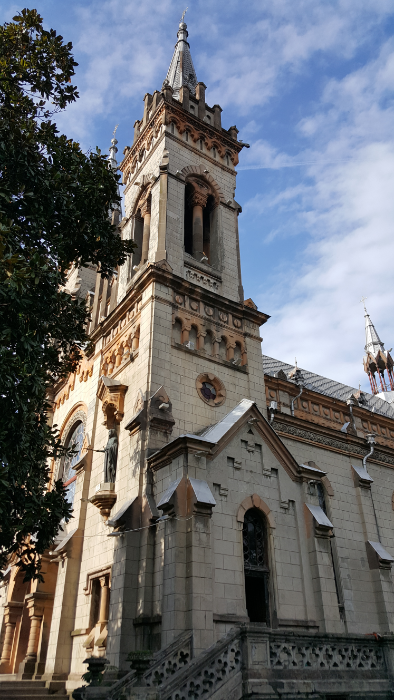 I had a train ticket to go back to Tbilisi the next morning, so as much as I enjoyed my time chilling in peaceful Batumi, it was time to move on to the next adventure. I asked at the hostel about how to get to the train station so early in the morning, and the guy said that the buses weren’t running yet, but I could probably get a marshrutka there.

I walked out to the bus stop around 6:45 because my train was at 7:30, and it was like I was the only person awake in the entire city. As you might imagine, I started doubting that there were even marshrutkas running after not seeing any for the first 10 or so minutes waiting at the bus stop. This one taxi driver kept asking me if I wanted a ride, but I was determined not to take a taxi. He asked where I was going, and I told him the train station (using a very unhelpful Georgian phrasebook I found online). He said he would take me there for 20 lari. HA! I literally laughed at him. I didn’t know how much it SHOULD cost to get there, but 20 lari is like $8 and is completely ridiculous for a 5-minute ride.

After I laughed at him, he lowered his price to 10 lari, and when I said no again, he changed it to free. I apparently am a phenomenal negotiator… This conversation all happened through hand motions and google translate because he spoke ZERO English. When he said he would take me for zero, I typed, “Why???” into google translate. I thought that was a valid question. He just looked at it, laughed, and gave me the “come along” hand wave.

Thanks to my mostly worthless Georgian phrasebook, I knew how to say, “Stop here!”, and I said it on repeat until he listened. He kept trying to tell me that he would take me all the way to Tbilisi for free, and still I have no idea why. Eventually, I convinced him (in my fluent Georgian) to take me back to the Batumi station, and that was that. He didn’t ask for any money, and I’m almost positive that he would have been insulted if I had offered.

It wasn’t the most conventional method of getting to the train station, and I’m sure my mother is losing her mind right now, but hey, it worked. I’m happy to report that the rest of the trip was uneventful. I took the train, I took the metro, and soon enough, I was back at my hostel to enjoy a couple more days in Tbilisi.