After I left Dolmabahce Palace, I still had a lot of things on my to do list for the day. I knew that I was going to get home feeling like I wanted to collapse, but I have this habit of punishing present Lara for the actions of past Lara. For example, if I eat a whole tub of ice cream one day, the next day at the gym I might make myself run an extra few miles (which is a significant task for me) as ‘punishment’ because past Lara has no self-control. This time, in ‘punishment’ for being a lazy bum my first couple of days, I didn’t allow myself to take things off of my sightseeing list for lack of time. No, no. Too much walking was not a valid excuse because if I hadn’t been lazy, I would have easily been able to see the same amount while enjoying slightly more leisurely sightseeing days.

From the palace, I walked to the funicular that goes uphill to Taksim Square, one of the major public squares of the city. It’s a major venue for public events like parades and other celebrations, as well as for protests and demonstrations. Otherwise, there are a lot of restaurants, shops, and hotels nearby, but since I wasn’t interested in any of those, I wasn’t quite sure what I should do there. Does that ever happen to you? You know that you’re supposed to go see something, but once you get there it’s like, “Hm. Well, there it is. What now?” There’s a little park by the square, so I settled on getting myself another nutella bagel, sitting under a tree in the park, and watching the other people in the square who seemed to have a better idea of what to do there than I did.

(This was actually my second time in Taksim Square. The first was in transit to my hostel from the airport when it was raining, I had all of my bags with me, and I spent most of my walk through the square grumbling about the fact that it was so darn big and I couldn’t figure out where to go and I had to walk forever to get from the side where the bus dropped me to the side where I was getting on the funicular. Thankfully, I was less grumpy this time.)

When I was thoroughly covered in crumbs and ran out of nutella to drip on myself, I left my tree behind and took a stroll down Istiklal Caddesi (Independence Avenue), a big pedestrian shopping street. Besides foot traffic, there’s an old trolley that runs along the route. It’s kind of cool, but if you’re going for speed, I think it would be way faster to just walk. With how long it takes for people to move out of the way of the trolley, it moves along at a snail’s pace.

I had a few churches that I wanted to check out in the area. It does almost seem like there are more churches in that neighborhood than mosques. Maybe that’s not true though. It could be that just none of the famous mosques are around there, and that’s basically where all of the churches are.

The most well-known church (I just made that up) along the road is the Church of Saint Anthony, a huge Roman Catholic church. The first church was built on its site in 1725, but the building that stands today is from 1912. The modern-day church was rebuilt to replace the earlier church that was demolished to build a tramway. I really liked the outside because I felt like it had a little local flavor. So often, churches look the same no matter where they’re built, so I liked that this one seemed to fit. The inside was pretty typical (and kind of forgettable to be honest), but I’ll take what I can get.

I made two other church stops in the neighborhood. The first was Hagia Triada, a Greek Orthodox church that was built in 1880 and was the very first domed church allowed to be built in Istanbul. During the Istanbul pogrom in 1955, mob attacks were directed primarily at the Greek population, and rioters attempted to burn the church down. It was pillaged and damaged but remained standing, despite having kerosene poured on it. It was restored, and thank goodness because it’s beautiful. The ceilings, in particular, are pretty fabulous. I also have some good feelings towards the church because someone invited me to Easter services the next day (now you know how far behind I am with writing), and while I didn’t end up going there, their offer was what I needed to motivate me to find an English-speaking church to go to.

Second, I stopped in at Surp Hovhan Vosgeperan Armenian Catholic Church (quite the mouthful). It has a somewhat similar history to the Greek church… It was originally built in 1837, was destroyed and burned down, and was rebuilt in 1863. One thing that I noticed while visiting these churches was how much security they have (aka they have more than the zero security that most churches have), and now I understand. I guess that’s what happens after people burn and loot the church. 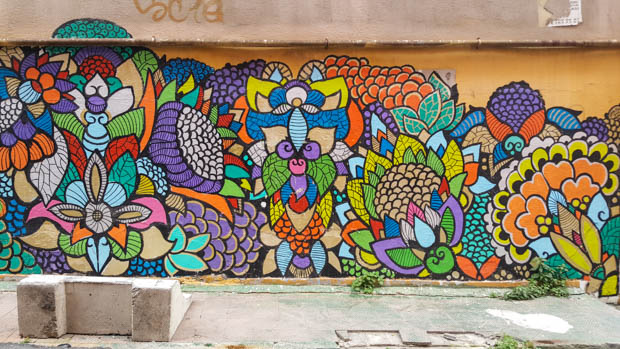 My last major destination of the day was Galata Tower. The first tower built on this spot was by the Byzantines in 507, it was made of wood, and they called it the Great Tower. In the 1300s, it was rebuilt in stone and was called the Tower of Christ. During the Ottoman years, it was used first as a dungeon and later as a fire tower. Now, it’s an incredibly claustrophobic tourist attraction. I’m not exaggerating.

First, you have to wait in a painfully long line to get in (I had to wait an hour, and I have a feeling that’s not even as bad as it gets). Then, you get whisked to the middle-ish of the tower in an elevator… and then you have to walk to the top up some narrow, spiraling stairs. At the top, there’s a restaurant where you can eat if you like to look at people’s backs (because there are windows, but there are so many people on the walkway outside that you’re not going to see any sort of pretty view while you’re eating).

There’s also a walkway around the tower that is just wide enough for one person to press their body against the rail and have enough space for someone else to pass behind them. You’re supposed to walk around it clockwise, but of course there are always those people who decide they should go against the grain and walk the other direction. And then there are the people who stop walking and block the entire walkway while doing so. I went around twice, and about halfway through the second time, I started regretting my decision because I was getting a little claustrophobic and about ready to start smacking people (don’t worry, I controlled myself). For reference, I don’t get claustrophobic easily. I think it was the combination of the frustration at not being able to walk and the people bumping into me and the fact that once I wanted to get out, I couldn’t.

On the positive side, the view really was spectacular. I was there as the sun started setting, so I got to see the city turn from daytime Istanbul to dusk Istanbul. I thought I might stay for the whole sunset, but once I made it to the end of my second round, I wanted nothing more than to be on the ground again. 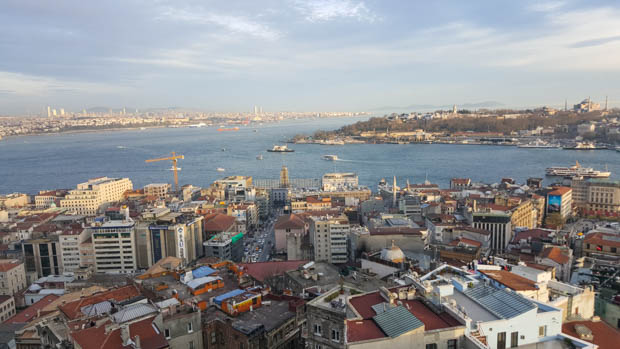 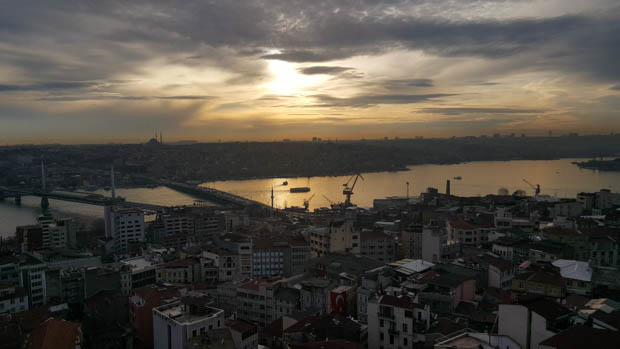 To get back to my hostel, I had to go back across the water to Old Town. I walked on Galata Bridge which is a pretty cool spot, especially at night. There are two levels to the bridge. The top has fishermen lining the railings at what seems like every hour of the day and night. The bottom is full of restaurants, and while it seems like a bit of a hazard to have a bunch of fishing lines flying over the walkway in front of the restaurants, no one asked me for my opinion. It would be funny if when you ordered a seafood dish from one of the restaurants, the fishermen above pulled it straight out of the water for you. Can’t get much fresher than that! Even though that doesn’t actually happen, you can buy fish sandwiches on and near the bridge that are made from super-fresh fish.

Since I’m not a fish person, I didn’t do that. Instead, I wandered down this big food street near the hostel, I imagine looking something like a zombie. I walked all the way down the street without seeing anywhere I wanted to eat… and when I got to the end, I remembered that I was starving, and not finding a dinner spot was not an option. So, I turned around and walked back down the street, attracting the attention of one of the restaurant’s yell-at-you-as-you-walk-by people. He tried to get my attention the first time I walked by, and I successfully ignored him. This time, I didn’t have the energy. He told me that he would give me a chicken kebab platter for 15 lira instead of the 20 lira listed in the menu (20 lira was about $5 at the time). I knew 20 was high and figured 15 was reasonable. Plus, if I decided to eat there, I didn’t have to walk around hungry anymore. Okay, deal.

Maybe it’s just because I was starving, but I think that platter was some of the best food I’ve ever eaten (okay, it was definitely good, but I think the “best food I’ve ever eaten” statement comes from the fact that moments before that, my stomach was eating itself). I guess the guy took a liking to me during the course of the meal because when I asked for the bill, he told me not to worry about it. I couldn’t accept that though, so I insisted on paying SOMETHING at least, and he agreed to 10 lira. Imagine that, one second I’m bargaining for a lower price and the next I’m bargaining for a higher one. Interesting turn of events.

Anyway, my punishment was successful. By the time I got back to the hostel, I was ready to collapse. I had to pull myself together quickly, though, because the next day’s schedule was no less grueling!