Following my unexpected Bursa excursion, I went into a mini-panic because I only had three more days in Istanbul, and there was so much more that I wanted to do and see. My days of going out with only a half-baked plan were behind me, and I made myself an ambitious schedule for the days ahead.

I decided to go north for day 7 and try to visit all of the things on my list in the northern part of the Europe side of the city. The first of those destinations was Dolmabahce Palace (pronounced dol-ma-bah-che), another Ottoman palace that was built after Topkapi. This one is more of a traditional palace in that it’s on these big palace grounds and there’s one primary building, whereas Topkapi is more spread out and has courtyards instead of exterior gardens.

In fact, Dolmabahce was built with the intention of being more similar to the “typical” European palace. Sultan Abdulmecid I decided that a new palace was necessary because Topkapi was “medieval” and lacked the style and luxury of the palaces of other European monarchs. I can’t say that I walked through Topkapi and thought for even an instant, “Hm… I mean, this is nice and all, but it’s a little medieval for my liking. It could be more luxurious because at the moment, only 30% of the ceiling is covered in gold leaf and I think it would be better at 80%.” But then, of course, I’m also not royalty so maybe that’s why my vision for these types of things is inadequate.

Anyway, once Sultan Abdulmecid decided that he needed a new palace, his court architects got down to business designing it. Fun fact… the architects were Armenian. The Balyan family served as court architects in the Ottoman Empire for five generations! That’s pretty cool. Nine different family members served six different sultans. They designed a huge number of palaces, mosques, Armenian churches, and public buildings in the empire during the 18th and 19th centuries. Garabet Balyan and one of his sons worked on Dolmabahce.

Want to venture a guess at how much Dolmabahce cost to build at today’s money value? More than $1.5 BILLION. Yeah, that’s right. Billion. Did they have enough money for this? Not quite… This was ¼ of the annual tax revenue in the empire. It was built at a time when finances were already becoming a bit of a problem, but the sultan wanted to make a statement that everything was fine, and the empire was as strong as ever. What better way to do that than to spend an exorbitant amount on a frivolous construction project?

The palace is like the anti-tiny house. You know how people these days are all into minimalism and not taking up more space than they need? The sultans were totally not on the same page. There are 285 rooms, 46 halls, 6 baths, and 68 toilets in the palace. You know, just in case every wife, girlfriend, and child in the family simultaneously decided to find an empty room to sit in.

Between 1856 and 1924, six sultans used the palace as their residence. After that, it was used as a summer residence by Ataturk, the first president of the republic, and now it’s a museum. You’re not allowed to take pictures inside of course, but I kind of feel like Turkey owes me something, so I didn’t feel bad sneaking a few.

Honestly, I can’t even begin to describe the interior of the palace. It’s one of those places where you could spend a month in each room, and even then you wouldn’t have enough time to take in the full splendor. The details are insane. I think I had a crick in my neck by the time I left because I spent so much time staring up at the incredible ceilings. Guess how much gold was used in the gilding of the ceilings? I almost don’t even want to say because it’s too ridiculous. Fourteen tons. Like… what?!?! The extent of my notes for the entire visit was “gold leaf radiators”. Honestly, I think that says more than enough. Why do you need gold leaf radiators???

There were two rooms in particular that I could have spent the rest of my life in. The first was a staircase, and trust me when I say that it’s the most beautiful staircase in the universe. You can look up pictures of the Dolmabahce Palace crystal staircase if you don’t believe me or if you just want to see how marvelous it is. The balusters (the vertical posts that support the railing) are all made of crystal, there’s a crystal chandelier hanging in the middle, and the ceiling/roof is made of translucent glass that floods the space with light. Besides all of that, the surrounding ceilings are amazing. I think I stood in that staircase so long that the guard had time to get a little suspicious of me and then get un-suspicious again because I spent the entire time not touching anything and just staring up with my eyes wide and my jaw dropped.

The other room was the Ceremonial Hall, and I think that my parents’ entire house could fit inside that single room like 15 times. Does anyone really need such a room?? But “need” isn’t exactly the motivating word in these situations, so I’ll stop trying to make sense of things and instead just enjoy the masterpieces that resulted from too much money and too big egos. The world’s largest Bohemian crystal chandelier hangs in the hall, and it weighs 4.5 tons. Ha. The ceilings though… they’re something else. I did manage to sneak an illegal picture of those though, so it’s your lucky day. Don’t turn me in.

The grounds surrounding the palace are also quite nice, though they aren’t nearly as big in area as the Topkapi courtyards. It’s right on the Bosphorus, so there are gates that lead directly to the water. The view on the day I went was beautiful because, for once, I was smart and visited an outdoor space when the weather was nice. Imagine that.

Nearby, there are two other Dolmabahce-related structures. The first is a clock tower just outside the gates, and it was designed by Sarkis Balyan, son of Garabed. It cost $350 million in today’s currency which is, in my opinion, a VERY reasonable amount of money to spend on a clock. You know what they say, time is money!

The second is a mosque designed by Garabed. It was originally commissioned by Sultan Abdulmecid’s mother, and he continued the work after her death. As a result, the building has a bit of a feminine quality to it. The towers are more slender than those of other mosques, and there’s a lightness and delicacy to the design that goes beyond what is seen in most mosques. 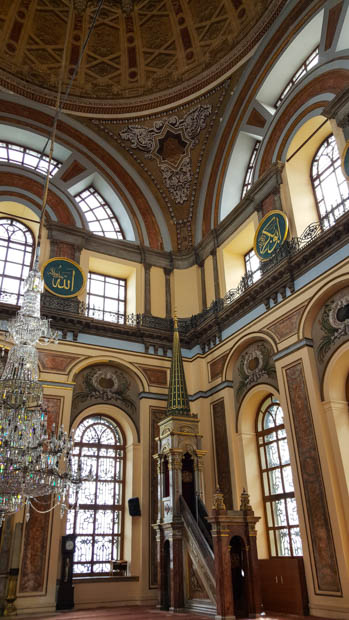 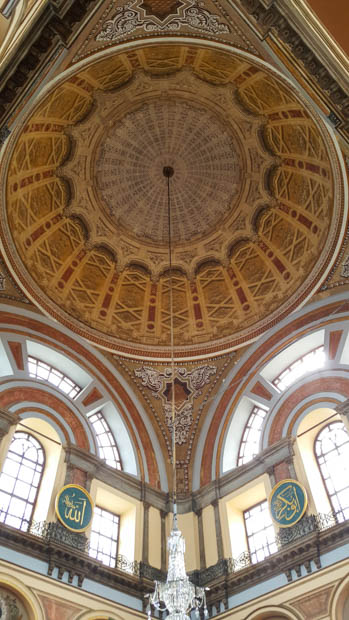 After visiting the palace, clock tower, and mosque, I felt like I had adequately seen the Dolmabahce collection. I still had a lot more to see, though, so I kept moving!

To be continued for now… I don’t want to overload you (any more than I already have, that is).