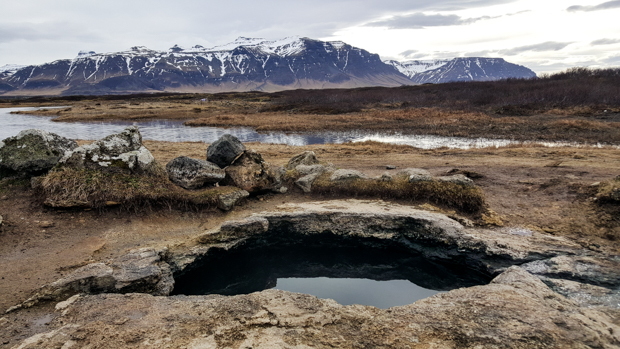 We still had one more day in Iceland, and since we had already gone east from Reykjavik, we decided to spend it exploring Snæfellsnes Peninsula to the north of the city.

I had one request, and one request ONLY, for our time in Iceland. I wanted to go to a hot spring that wasn’t a swimming pool. I wanted it to be natural in every way, not just naturally heated. Our first stop of the day was a response to my ongoing request. I’d found a few lists of natural hot springs around the country, and one of them, Landbrotalaug, was right along our route. It’s kind of off the beaten path, but there were enough people who knew about it that we had to wait when we got there. Thankfully, we only had one group in front of us, and we didn’t have to wait very long since the water was so hot. There’s only a certain amount of time that you can even stand to stay in there.

We got into our suits and then waited in the car for the group before us to finish up. We were kind of second-guessing waiting, so we asked a couple of girls who were coming back to their car if it was worth it. Without hesitation, they said absolutely yes. Okay, convincing. So, we stayed.

When we saw people getting out, we headed in their direction. I thought that there was only one pool, but it turns out there are two! One is wide but shallow, and the other is deeper but smaller. We went to the big one first, but one of the people told us that we should check out the little one because it would be the perfect size for the three of us. It was so nice!!! It was the perfect size, as promised, and we stayed until we were feeling fully boiled. After that, I was 100% satisfied with our trip. I know, I’m hard to please. The Blue Lagoon may be the famous hot spring destination, but this was way more my style.

Since we had only a loose plan for the day, Tony and I spent some of the car time scouring the map for other things that people had deemed interesting on google maps. Some of our detour selections were more successful than others, but hey, you win some you lose some. I found a beach (Ytri Tunga Beach) where some of the reviews said you could see seals! I assumed that we wouldn’t see any because it was probably a summer thing, but I was wrong!! They were far away, but I was excited they were there at all! (Mostly because I suggested the stop, so I wanted it to be a good one.)

Tony found us another stop, this time a waterfall called Bjarnarfoss. The waterfall itself was practically a trickle coming off the top of a cliff, but the rapids that came cascading down afterwards were awesome. Water is seriously the coolest. Mike continued his strange tradition of drinking from every cold water source that we came across… what a weirdo.

We also found a gorge on the map, Rauðfeldsgjá. It, of course, got its name from a legend. This is one of my favorites. There was a dude, supposedly half-man and half-troll, who “lived with his voluptuous and handsome daughters”. That’s a quote from the sign there, obviously only including the MOST important details of the story. The man/troll’s brother and two nephews lived nearby. One day, the cousins were playing together, and one of the boys, Rauðfeldur, pushed voluptuous and beautiful daughter Helga onto a drifting iceberg. No need to worry; she was unharmed and drifted alllllll the way to Greenland. Her angry father pushed Rauðfeldur to his death in the gorge that now bears his name and pushed the other nephew off a cliff which is now named after him. He then disappeared into a glacier and was never seen again. (Questions: Did Helga ever make it home? How do we know she survived? What was the brother’s response to the murder of his two sons? What happened to the other daughters after their father vanished? Why is it important to note that they were voluptuous? How did an iceberg drift all the way to Greenland, and how long did that take? SO many more, but I’ll stop there.)

You can hike up into the gorge, and as you go, it gets narrower and narrower. Of course, when we were there, it was also filled with snow. We were already unprepared gear-wise (crampons and waterproof pants would have been helpful), and on top of that, no one even brought gloves from the car. We could have used those for sure… the entire “hike” was just climbing up snow. It probably went on forever. It was super cool, and I wonder what it’s like without the snow. We didn’t make it terribly far because we realized that as far up as we went, we would have to come back down. Down was the much worse direction.

Our next stop was a pre-planned one to see a naturally-formed stone bridge in the water, Gatklettur. It’s a nice spot, and the sounds of the waves add to the whole serene vibe that it has going on.

Our next detour was at Saxhólar Crater, another “hmm what’s that? Must be something because there are lots of cars” stop. The trek to the top involved a LOT of metal stairs, and there was a nice view from the rim. I mean, it was no Kerid Crater, but I suppose it was okay… (hehe)

We stopped at one final waterfall, and even though I thought I could never get sick of waterfalls, I was definitely starting to get a little waterfalled out. We all were. Kirkjufellsfoss was absolutely worth a stop, but instead of walking all the way out to it and seeing it from the top as well, we just photographed it from the front and moved on.

Along the road back to Reykjavik, there was a nice viewpoint looking towards one of the fjords, Kolgrafarfjördur, with some awesome mountains around it. I think that this was my favorite day for scenery, by the way. While we were driving and during our various walks, it was gorgeous. There were way more mountains than on the other days, and I’m a big mountain fan.

From there, we drove all the way back to Reykjavik. Mike and Tony went to the public pool for some hot tub time, but I opted out. I wanted to get started on packing and showering. After they got back, we went to dinner and then did some snack shopping. I had a VERY long airport day ahead of me, so I was sure to pick out nutritious snacks like mini chocolate chip muffins, Ritz crackers, and apples (1 out of 3 is good enough, right?). Travel day snack shopping is one of my favorite things because little-known fact but calories don’t count on travel days.