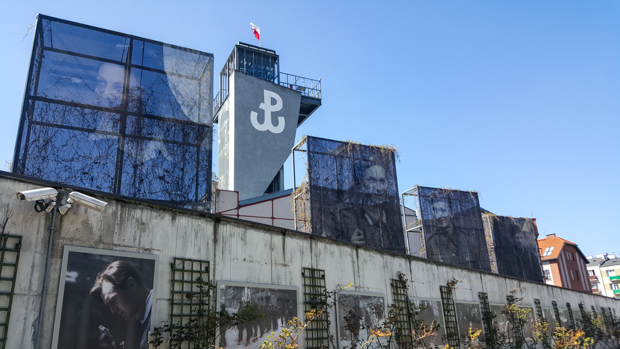 I spent a lot of time wandering aimlessly around the streets of Warsaw, partly because I was recovering from Iceland and partly because sometimes it’s nice to simply wander. You know me, though. I also need to fit in some nerdy museum time to be fully content. Like any capital city, Warsaw is FULL of museums. With only three days in the city, I had to be selective (especially since I can easily spend an entire day in a museum). I ended up visiting three: the Museum of Pawiak Prison, the Museum of the History of Polish Jews, and the VERY highly recommended (like seriously everyone said that if you’re going to visit one museum, you should visit this one) Warsaw Rising Museum. If that sounds like an emotionally heavy selection… well, it was. (Fair warning this is also kind of long… but there’s so much to say!)

I had good timing for a couple of reasons. First, I was in town on a Thursday, and a bunch of museums are free on Thursdays. Second, my particular Thursday was the 19th of April which is also the anniversary of the Warsaw Ghetto Uprising – and 2018 was 75 years. I had no idea! After I cluelessly walked into a school program at the largest remaining section of the ghetto wall, I did some googling. I’ll talk more about the Ghetto Uprising in a minute, but first… My next stop after the wall was the Museum of Pawiak Prison which I decided to go to simply because I walked by and thought it looked interesting.

The prison was originally constructed in 1830, and from the start, it housed both criminal and political prisoners. During the partitions of Poland, the political prisoners were Poles who fought against the invaders for independence. During the Second Republic, they were often communists. Then, during WWII, the Nazis took over Pawiak. Most of the people held there during the war were members of the Polish resistance, but even innocent passers-by weren’t safe from being captured during random street roundups. People from all walks of life ended up in the same place – men, women, families with small children, pregnant women. The only commonality was their Polish heritage.

The museum is small but powerful. The best part is these video interviews with people who were imprisoned there. They talk about the different aspects of life as a prisoner, painting a pretty brutal picture. In summary, the food was horrible (think soup with worms in it). Cells were stuffed to 4x their intended capacity. Prisoners were frequently interrogated, and when someone was taken, no one knew if or in what condition they would return. A mini-resistance formed inside, and messages were often passed on through Polish doctors and nurses working in the prison hospital. An estimated 100,000 people were imprisoned in Pawiak during WWII. 37,000 were executed by firing squads, and 60,000 were sent to concentration camps.

One thing that I found interesting but so confusing was that they said mothers were taken care of. They might kill you in your 9th month of pregnancy, but after giving birth, you were placed in a separate mothers’ wing with the baby. They had interviews with people who were born and lived in the prison for the first few years of their lives! It just doesn’t seem consistent. One woman said that she was arrested just after having a baby, and she begged to leave the baby with her family rather than bringing him with her. Then, at the prison, they asked if she would be willing to breastfeed another baby whose mom had stopped lactating. Why go to so much trouble?

At the end of the war, the Nazis blew up Pawiak, including the prisoner records, so there’s no complete list of the people who were imprisoned and who died there. A lot of the information they have was volunteered by relatives, etc. I love that. It’s a group effort to preserve history, with people volunteering information, pictures, objects, etc. to the museums to make them more complete and to honor the memory of their family members.

After leaving Pawiak, I made my way to the Museum of the History of Polish Jews. Outside, they were getting ready for the Warsaw Ghetto Uprising anniversary event. People all over the city were wearing paper daffodils in commemoration, and when someone on the street gave me one to wear, I did so with pride because I feel like I’m a little bit Polish now. The info pamphlet they gave me said, “By wearing them, we demonstrate that together we remember those who perished fighting for their dignity.” I can definitely get behind that.

The Warsaw ghetto was established in 1940, and over 400,000 Jews were herded inside. Conditions were horrible, and people were killed by starvation, disease, and mass executions. In 1942, 300,000 Jews were deported to Treblinka (a death camp), clearing out much of the ghetto. Those remaining knew that certain death awaited them and decided to fight back. On April 19, 1943, Nazi forces entered the ghetto to remove the remaining inhabitants and were met by a resistance of about a thousand. The insurgents were outnumbered, under-equipped, and exhausted, but they chose to die on their own terms. Over the next four weeks, residents fought back as the ghetto was cleared out and burned to the ground. By May 16, the ghetto was gone and the Great Synagogue was blown up. A few managed to escape the burning ghetto through the sewers, but most were killed or committed suicide to avoid capture.

The story doesn’t have a happy ending, but stories of the participants’ bravery inspired more acts of resistance. Inmates at Treblinka heard about the uprising and held their own revolt, leading to the eventual dismantling of the camp. Many survivors of the Ghetto Uprising participated in the Warsaw Uprising the following year.

I popped into the museum since it was also free on Thursdays and was completely overwhelmed. They did a great job, but it’s absolutely massive. It starts with the first Jews coming to Poland and goes through modern day. I did a quick skim of the background stuff and mostly focused on the Holocaust forward.

A few months before my visit, I read about how the Polish government was in the process of passing a law criminalizing the mention of Polish crimes against Jews during the Holocaust. Essentially, the president said that Poland was 100% a victim of Nazi Germany, and anything Poland may have done against Jews was forced. People freaked out, and after going through the museum, I understand why. Yes, Poles weren’t actively fighting with the Nazis, but that doesn’t mean there were no moral failings. Even Jews did things that hurt the collective in hopes that it would help their families. In this museum, a museum in the capital of Poland, the same city where the legislation passed, it talks about the roles that the Polish people played during the war. Often, they were hiding and protecting their Jewish neighbors. Other times, however, they were believing the propaganda, letting fear take over, and attacking or turning in their former friends and neighbors. In one town, the Jewish residents were gathered together and burned alive in a barn… by their Polish neighbors. I just don’t understand the value in making such a statement at this point. It’s nothing more than a barrier to healing and productive conversation.

My last museum stop was the Warsaw Rising Museum. I was so excited because everyone gave it such glowing reviews, and I wanted to learn more about this important part of Warsaw’s history. For me, the museum was beyond confusing. I had a map and tried so hard to follow it, but I never felt like I was in the right place. Maybe it was user error. Maybe I should have gotten an audio guide? I spent three frustrating hours trying to piece the timeline together (and dodge giant groups of school kids), and every time I thought I understood what was going on, I’d realize that my timeline was all mixed up again. I don’t know if it’s because they assumed some base level of knowledge which I didn’t have, but I probably would have been better off watching a documentary. I’ll spare you the rest of my museum struggle details, but I don’t want to skip talking about the Warsaw Uprising because it’s pretty awesome.

A Polish resistance began to form almost immediately after Poland was occupied by the Nazis and the Soviets. The “Polish Underground State” was practically an underground Polish republic. It was loyal to the Polish government-in-exile in London, and there were divisions concerned with every aspect of life. Underground printing houses distributed books, newspapers, and other uncensored printed materials. An extensive underground school system gave students, from primary school through university, the chance to continue proper studies (the Nazis banned schools past 4th grade, and the children were to be taught as little as possible). Very few Polish Jews survived WWII, but many of those who did were aided by the resistance.

There was also a military component to the resistance. Polish spies carried information to the Allies. German supply lines were disrupted. Representatives were sent into concentration camps to gather information and organize prisoner revolts. The Polish Home Army also fought a couple of major battles against the Nazis, one of which was the Warsaw Uprising. On August 1, 1944, the uprising began with the ultimate goal of liberating Warsaw from the German occupation. People worried that if Warsaw was “liberated” by the Soviet army, the government-in-exile would not be recognized, and Russia would take over. So, the only option was to liberate themselves.

The uprising lasted for 63 days. In the beginning, the Germans tried to break the will of the resistance through massacres in some outlying neighborhoods. Soldiers went from house to house and murdered everyone inside, regardless of gender or age. This brutality only strengthened the resistance’s resolve, however, and they fought on.

After about a month of fighting, the Polish forces had control of Old Town, and the exiled government was desperately asking for help. The Soviets refused to support the resistance army and also obstructed other Allied countries from sending aid. Without any support, the situation was hopeless, and the decision was made to retreat. In two days, over 5,000 resistance fighters fled the city using the sewer system (a major transit route throughout the resistance efforts). The uprising was officially over at the beginning of October, and as punishment for fighting back, Warsaw was systematically destroyed. About 25% of the city had been destroyed in the uprising fighting, but now destruction was the major goal. Houses were firebombed, and national and historical monuments were drilled and blown up with dynamite.

Even though the Uprising was ultimately unsuccessful, it is amazing what the resistance was able to accomplish with limited resources and support. After learning about the struggles of the Polish nation, it’s not hard to understand why people are so proud to be Polish. They’ve had a rough history with more low points than high, but they’ve endured. Poland exists today because of the persistence and endurance of the Polish people. That’s pretty darn cool.