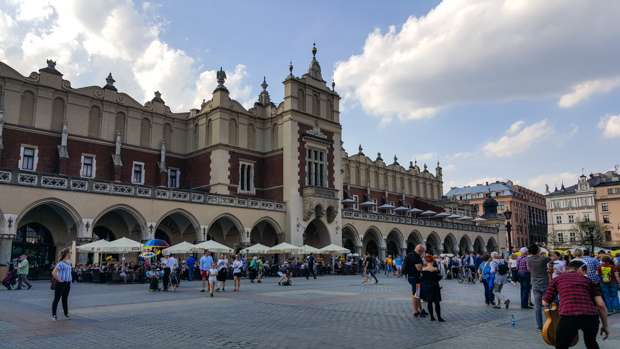 My next stop after Warsaw was Kraków (kra-kohv) in southern Poland. I was sad to leave Warsaw behind, but at least I still had more time ahead in Poland. I wasn’t ready to move on just yet. I took a train (the cheapest and most inconveniently timed train, of course) and bonded with some other tourists as we attempted to navigate the Warsaw train station.

The ride to Kraków was my first experience in a compartment train, and it was strange. Since I didn’t have a travel buddy to share the weirdness with, I wrote about it in my journal.

The compartment is too quiet, no one is talking and it would be weird if they were. I almost feel like my typing is too loud, THAT’S how quiet it is. Shouldn’t the train be making more noise?? What is this? Some newfangled electric train or something?

Also, am I allowed to eat in here? I think that if the answer was no, there would be signs making that clear. But it’s not like they’d put up a “yes, you can eat” sign… that doesn’t make any sense. At least then I’d be sure, though. If we were in rows, I would just go for it because you can kind of hide yourself. Since we’re in a compartment, I feel like there are 4 people here who would judge me really hard if I’m doing something wrong. One is a nun so maybe she wouldn’t judge me, but at least the other three would.

Supposedly eight people can fit in this compartment, but I think that would be a mess. There are just 5 of us now, and I think that’s enough. Maybe 6 would be okay. But 8?? Eek!

A couple minutes later: AH! The nun just started eating a sandwich. I assume she wouldn’t break the rules, so eating must be allowed. Okay, first I’m going to eat something because my stomach is empty, and then I’m going to get to work on my to-do list.

The train took about 3.5 hours, and despite the compartment weirdness, I was sad to get off because I was being incredibly productive… probably because I felt like I had to stay busy or else risk making awkward eye contact with one of my co-passengers. Eye contact means someone might start talking to me, leading to the weird “oh, sorry, I don’t speak Polish” thing and totally ruining my camouflage.

The train arrived in Kraków around 3PM, and my goal was to make it to a 4PM walking tour. Doable. I had 1 hour to figure out the trams, get myself to the hostel to drop my stuff, and sprint back out again to the meeting point. I made it with seconds to spare and only mildly sweaty from my brisk walk across the city.

While we were waiting for the tour to start, the guide asked where everyone was from. There was one other group visiting from the US – two couples, plus a girl around my age – and I started a conversation with the girl, asking what part (Florida). She ended up being super cool, and I felt good about myself for being outgoing and making a friend.

Soon enough, the tour started, and the guide seemed determined to make us all Kraków history experts by the time he was finished.

Kraków as a settlement began as early as 50,000 BC, but not much is known about it beyond what archaeology has revealed until 966AD when the first written mention of Kraków appeared. By then, it was already a bustling commercial center. The Kingdom of Poland came soon after in 996AD, and Kraków was named as its capital in 1038.

The earliest settlements were on Wawel Hill, a rocky outcropping near the Vistula River (the same one that runs through Warsaw) that later became the site of Wawel Castle, the royal residence of the Kingdom of Poland until the capital city was moved to Warsaw. As the town grew, it expanded off of the hill and to the north where the heart of modern-day Kraków is now located.

Kraków Old Town is a UNESCO World Heritage site, as is Warsaw’s Old Town. The difference is that Kraków’s is actually old. Unlike Warsaw, Kraków was not a major battleground during WWII, and much of the city, including many of its historical and cultural monuments, survived without too much damage.

The city used to be surrounded by city walls (because what medieval city wasn’t??) with 47 towers, plus a 4km moat. Most of the fortifications were dismantled during the Austrian occupation during the partitions, and today, a ring of green space stands in their place, encircling the oldest part of the city. Only a small portion of the formerly extensive fortifications was saved from destruction – Floriańska (St. Florian’s) Gate, one of the major entry points into the city, and the Kraków Barbican. The Barbican was a defensive structure that was connected by a drawbridge, over the city’s moat, to St. Florian’s Gate.

In the 1200s, before the city walls were built, Kraków was invaded by the Mongols. The city wasn’t defended, and the invaders massacred everyone and burned everything that wasn’t behind fortifications. The people of Kraków used this opportunity to rebuild the city with a better layout, and the new design included a HUGE town square. It is now the largest medieval square in Europe, with 200m long sides.

One of the reasons for Kraków’s rapid growth and great wealth was its location. By law, merchants weren’t allowed to cross Poland with their goods. Instead, they were forced to sell their wares in Kraków to then be sold on the other side of the country for a profit. Kraków was also fortunate to have access to the valuable resources of salt and lead. A trade agreement with Hungary gave Kraków a near monopoly on copper as they traded Polish lead for Hungarian copper.

The large medieval square was put to good use as a market, and it also became one of the most disgusting parts of the city. The ground was covered with garbage and human waste, and when things got out of hand, a soil layer was added. The ground level is now 3m above its original level. When the government decided to redo the cobblestones in the early 2000s, they gave archaeologists permission to dig in the square for 4 months. Instead, they ended up staying for 5 YEARS, still only managed to explore about 10% of the square, and unearthed hundreds of burials and thousands of artifacts. (There’s an archaeology museum under the square that I didn’t visit, but it’s at the top of my list if I ever go back!)

Old Town is also home to the second oldest university in Europe, Jagiellonian University (aka University of Kraków), founded in 1364. Copernicus attended from about 1491-95, and Karol Wojtyła, the future Pope John Paul II, attended until it was shut down in 1939 when over 180 professors and intellectuals were arrested at the start of WWII. Some of these professors were later released, and they returned to operate the university as part of the underground education efforts until it was reopened officially in 1945.

At some point during the tour, much to my dismay, my Floridian friends vanished. Then, at the very end, the girl popped up again and said that they ducked out for a bit to get some ice cream. That made me like them even more. She came back to ask for my number so we could hang out! And then they vanished again.

Later, she invited me to join them for dinner! I was thrilled to have made some new friends! Dinner was so much fun. The girl, Annika, had just finished a master’s degree in Sweden, and her parents came to meet her and do some sightseeing with another couple before they all went back to the States. They’re all the kind of people who make you feel immediately at ease, and they asked me about a million questions about my time in Armenia. They had a tour planned for the following day, but they said that they were considering going hiking the day after, and if I was interested in joining, they’d keep me posted. Of course I said yes! By the time we parted ways, I felt like I had been adopted and had known them for my entire life. I didn’t know if the hiking thing would actually come through, but I hoped it would because I had so much fun hanging out with them. I walked back to the hostel that night with a big smile on my face and a warm feeling inside.