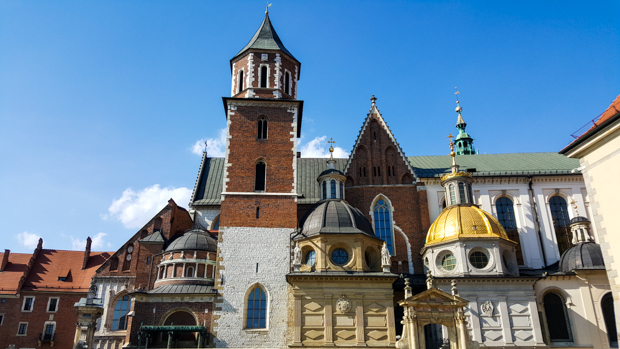 I didn’t have any big plans for my second day in Kraków, so I allowed myself a leisurely morning before setting out to investigate the random collection of things I had on my “to see” list. Mostly, I was tired of chaotic, ambitious days and wanted to leave the day somewhat unplanned so that I could go with the flow and make game-time decisions.

My first move was to the former location of the Kraków Ghetto. In Kraków, the ghetto was placed on the fringes of the city (at the time), and 15,000 Jews were crowded into an area previously occupied by 3,000 people. I took a tram there from my hostel and started at Ghetto Heroes Square where a memorial commemorates the ghetto victims. When the ghetto was operating, this square was where people were gathered before being sent to various concentration camps. There is a memorial there now, a series of empty metal chairs scattered across the square. A nearby sign explains that when the first Jews were being deported, they were told to bring things with them to start a new life. A lot of them brought chairs so that they would have somewhere to sit in their new homes. Reading that… it hit me pretty hard.

A pharmacy located by the square was the only one that continued operating after the establishment of the ghetto. The owner, Tadeusz Pankiewicz, declined the offer to move his pharmacy to another part of the city. He lived onsite and was the only non-Jewish resident of the ghetto. He and his staff did what they could to help the ghetto residents, providing things like medicine, smuggled groceries, information from the outside, and even hair dye for those plotting escapes. Today, the pharmacy is home to a small museum.

Only a few blocks from the square is the Schindler enamel factory. Many of the Jews who weren’t immediately deported were kept in Kraków for labor purposes, forced to work in a couple Nazi-established factories and others supporting the war efforts. Oskar Schindler, whose story is told in the film Schindler’s List, is credited with saving the lives of 1,200 Jews, shielding them with the help of his factories and endless bribes. The building is a museum now.

A few portions of the ghetto wall are still standing, so I went to visit those as well. The one is marked with a plaque that says (in Hebrew and Polish), “Here they lived, suffered, and perished at the hands of Hitler’s torturers. From here they began their final journey to the death camps.” The top of the wall looks like a series of tombstones… I’m not sure if that was intentional or not, but it’s another one of those things that makes your heart hurt because it’s just not right.

Near there, I spotted a marker on google maps for a fortress! (Mom, skip this paragraph.) A few reviews said that while it’s closed, there are a few places where you can sneak inside, a prospect that clearly appealed to me. I walked around the building a few times but, much to my dismay, couldn’t find a reasonable way in. I found one spot that looked like it had been recently patched. Maybe that’s what they were talking about. In my assessment, you’d have to be either a child or a contortionist to squeeze inside now. It’s too bad… I peeked through the windows, and it looked like an interesting place, plus there’s supposed to be a great view from the roof!

So, I settled for walking around the outside and then continued on my way to the Krakus Mound. What is this, you ask? Well, honestly I’m not really sure, and it seems like no one else is either. This is one of two mysterious prehistoric mounds in Kraków. No one knows when exactly they were built or why. This one has a solid wooden core, covered with soil and grass. Like… what????? IT IS SO WEIRD. It looks like a pimple on the surface of the earth. Legend says that it was built to honor the mythical city founder, King Krakus, and the other was to honor his daughter. But, no one knows. I just went for the view.

My last major stop was Wawel Hill. I was coming from the outskirts of the city, so I took another tram in an effort to keep myself from walking into exhaustion.

Wawel Cathedral is one of the most prominent sights on the hill today. The first church on the site can be traced back to the early 1000s, soon after Poland became a Christian country. The current structure, however, was built in the 1300s and is actually the third iteration. The first was destroyed, and the second burned down – a common theme on Wawel Hill.

Today’s cathedral is quite the architectural hodge-podge. The 1300s cathedral was built in the gothic style, but portions of the previous Romanesque cathedral survived the fire intact and were retained in the new design. Later on, various chapels were added on to the side, and those are in the Renaissance and Baroque styles. Much of the interior was redone when baroque was all the rage, so it doesn’t even resemble what it would have looked like originally.

The castle has had plenty of its own struggles throughout the years. It fell victim to multiple fires, was occupied by the Austrian army during the partitions of Poland, and was further damaged and plundered during WWII. Kraków didn’t see nearly the destruction that Warsaw faced during the war, however, so Wawel and other landmark buildings did manage to survive. Today, the palace buildings house various museums.

I skipped the castle museums and only bought a cathedral ticket because I wasn’t really feeling up to a big museum experience. With my ticket, I could go up the bell tower (which was all I really wanted), see the crypt, visit the cathedral museum, and walk around the inside of the church like a VIP. All that for just $4! Ha!

The cathedral is beautiful, but like so many others, there’s almost too much going on. It’s completely overwhelming to the point where you can’t appreciate anything inside. “Geez, ya think they have enough fantastic marble statues in here? Who’s this? Another dead guy?” “Ugh, there’s so much shiny gold in here that it’s making my head hurt!” I call it the “Vatican Museum Effect”. If you’ve ever been to the Vatican Museums in Rome, you know what I mean. There’s so much amazing art around you that it all seems “normal”, and instead of looking at each thing individually, you try to take it all in at once and completely lose your mind.

In the bell tower, there are a few different MASSIVE bells. I don’t know much about bells, but they were big. That seems like the most important takeaway. The biggest weights 12,600kg (13.9 tons), is only rung a couple times each year (and requires 12 bell ringers), and can be heard 30km (18.6 miles) away. I suppose that’s all impressive in the bell world. I mean, it sounds absolutely insane to me. Why make a bell that’s clearly a huge pain to handle?? I’m sorry, I’m probably being incredibly offensive to bell-lovers everywhere. Bells aren’t really my thing.

The crypt is filled with dead kings and queens and national heroes. I was excited because it’s the only fully-intact part of the Romanesque church. The cathedral museum has mostly Pope John Paul II paraphernalia. Did you know that he was the first non-Italian pope in almost 500 years? He also has a crazy life story (it’s worth a read!), could speak 12 languages, and is a Polish hero. There is a case of gifts he received during his time as pope, and the coolest was a cross that American astronaut Buzz Aldrin took with him to the moon! I just kept looking at it and thinking, “That cross has been to the moon and back!” Whoa!!

The final thing on my list was visiting the stained glass museum. I am obsessed with stained glass, so it sounded wonderful! The only problem was that their tour minimum is two people, and I am obviously only one person. You’ll be shocked to hear that it’s apparently NOT the hottest destination in Kraków. No one else turned up, so I was out of luck. That was a bit of a bummer, but it did mean that I had some extra time to relax back at the hostel. A dull silver lining, but a silver lining nonetheless.