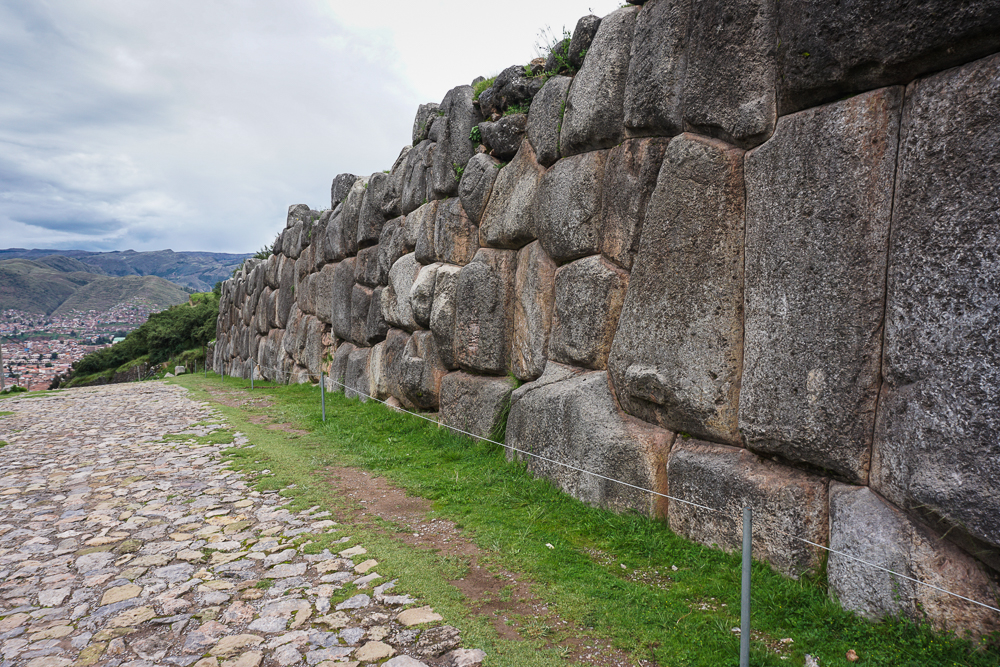 Last time, we left off on the side of the road after being released from the world’s craziest colectivo. (This time, get ready for a long post and lots of pictures!) The driver dropped us off across the street from our next destination, Q’enko (ken-koh), a large and formerly important rock. “A rock?” you ask. Well, yes, but this is no ordinary boulder. It is limestone and is what’s known as a “karst” landscape, or an area of soluble rock that has dissolved over time to create an irregular formation. Or so I’m told.

Q’enko is not the original Incan name for the site, rather it’s the Quechua name (Quechua is an indigenous language commonly spoken in the Peruvian Andes). That’s the case for many of these sites, with the original names either lost or in disuse. Anyway, the Quechua name, meaning labyrinth, twisted, or zig-zag, has been around since the 1800s. There is, as you can probably guess, an abundance of theories about Q’enko’s use, but they all consider it an important religious ceremonial site. Part of the challenge of understanding the Incan culture results from the Spanish campaign to destroy anything that had to do with pagan religions. Idols made of precious metals were stolen; rocks carved for religious purposes were destroyed. There’s limited information to work with, but at least they didn’t find some way to destroy the whole site.

There are still carvings visible on top of the rock, along with some zig-zagging channels that liquid could flow down. Theories for what liquid may have been used: corn beer. Or maybe animal blood. Basically the same, right? An interior chamber was used for sacrifices (human sacrifices were NOT typical in Incan society, in case you were wondering). There’s some other stuff on top that was probably used for charting the sun. Lots of things happening in/on/around this rock!

The group started grumbling about being hungry when we arrived at Q’enko and nearly staged a mutiny when I said it wasn’t lunchtime yet. Geez! Traveling with a group is such a pain! I’m kidding, I’m kidding! But it wasn’t even noon yet, and I only had the most perfect picnic spot picked out and had been waiting for two years to use it. No way was that getting taken away from me. Patience, people!

After everyone moaned and groaned their way through Q’enko and down the path to our lunch spot (with a sprinkling of accusations that I was trying to kill them), we finally arrived. WELL. The group’s attitude transformed. Everyone told me that it was worth waiting for, that the view was great and the rocks were nice to sit on. I KNOW. That’s why I picked it! Moral of the story is, trust me!

The bad news was that the sky grew increasingly threatening as we ate, and I crossed my fingers that the rain would hold out just a little longer, through our last stop at Saqsayhuaman (sak-say-WAH-man), the most expansive set of ruins. We walked there, got directions from the park rangers, and within minutes, it started POURING. Welp. So much for crossing my fingers!

The weather radar showed the storm passing in an hour, and the group started discussing staying vs. heading back to town. I really wanted everyone to see the last site, but we weren’t going to wait out in the open, and there’s nowhere to take cover… except… we spotted two roofed areas among the ruins. Our only hope. Benjamin and I looked at each other and made a beeline for them while everyone else followed behind.

Well, if only the route there was direct! We had to go up a few levels which meant finding stairs while pretending that we knew exactly where we were going to avoid losing the confidence of the group. Finally, we reached the right level! The end was in view! Anddd we stopped in our tracks in front of a sign strung up across the path. “No pasa”. Soul crushing. Dad caught up with us, looked at the sign, said “heck no”, and stepped over the rope without hesitation. It was hilarious. And that was all the encouragement we needed to follow suit.

This ended up being the best decision we made all day (thanks, Dad!). Our hideout wasn’t particularly comfortable… we were all contorted and had to stay quiet to keep from attracting the attention of the park rangers who were just out of sight under the adjacent roof. But we were dry, and no way did we want to get booted out into the rain!

Finally, about 45 minutes later, the rain slowed, and we decided it was time to make moves. As we climbed out, one of the rangers under the other roof started blowing his whistle (which is what they do when people are doing something they shouldn’t), and we kept moving, with no hesitation or glance back. Benjamin said he thought it was directed at someone else, but either way, I have no regrets.

Back in legal territory, we took a quick spin around the ruins. Saqsayhuaman is considered one of the most impressive Incan sites. Machu Picchu is so famous and popular mostly because of its location, not as much because of its construction. Saqsayhuaman, on the other hand, is an incredible architectural feat. The name is, of course, Quechua, but the meaning is debated with the most likely options being “marbled falcon” or “marbled head”. It is said that the city of Cusco looks like a puma/cougar/mountain lion, and Saqsayhuaman forms its (marbled?) head.

Construction began in the 15th century, led by one of the most famous Inkas (kings), Pachakutec. He was responsible for many of the great Incan building projects, and this one took 50 years. You may be wondering – how did they have the manpower for a project like this? The Incas didn’t have slaves, and records claim that 20,000 men worked on the project. Since there was no money in their society, taxes to the government were paid in either labor or goods. This “labor tax” is what made so many of these grand, labor-intensive monuments feasible.

While Saqsayhuaman is often called a “fortress”, it is believed that its primary function was religious and it was well-defended due to this religious importance, not because it was meant as a fortification. However, it did have its moment when it was used as a stronghold in the 16th century during the Spanish invasion. Following the Incas defeat, the Spanish disassembled and buried the site to keep it from being used for that purpose again. Over time, many smaller stones were taken and used for other buildings in colonial Cusco, including the Cathedral. Even into the 20th century, people could pay to use the site as a quarry for their own personal building projects. At the base, three imposing wall layers remain largely intact, thanks to the massive scale of the stones (one is nearly 30 feet tall and weighs 150 tons!). At the top, there used to be three towers, and only the foundations of those remain.

Pachakutec also created Inti Raymi in 1412, a festival dedicated to the sun god Inti and the celebration of the Inca New Year. It was held on the winter solstice until pagan religious celebrations were banned by the Spanish in 1535. In 1944, the festival was revived and is celebrated at Saqsayhuaman each year on June 24th, featuring a theatrical representation of the Inca ceremony and festivities.

Even though everyone was feeling pretty drained after the rain, I did want to make sure we got the full experience… including my favorite part, the rock slides! (Admire my avoidance of the bottom-of-the-slide puddle.)

And my second favorite part, the weird tunnels!

And here are other various pictures from around the ruins.

Okay, THEN we’d had enough ruins for one day. I planned for us to walk back down to town from Saqsayhuaman, not remembering that the path isn’t exactly ideal… downhill with uneven and slippery rocks. We made slow progress until the end of the rocky part and breathed a collective sigh of relief when we hit a normal street.

We initially walked past a guy standing at the bottom offering taxi rides, but then I looked at my parents and changed my mind. Jocelyn and I conferenced to determine a reasonable taxi price, and I asked him how much to the central plaza. 10 soles. I said okay… and by the way, we have five people. He tried to raise the price, but we rejected that and got in the car telling him we’d pay 10.

I thought we’d have to squeeze with 5 people, but it turned out that his little car had two back rows. Perfect! As we rode back into town, he asked about our other plans and listed some other places he could take us. Hm… I already had our schedule planned out, but we actually DID need to hire a taxi. I asked if he was free the following day and how much he would charge for my itinerary. It was in line with the price I was expecting, so we accepted! It kind of felt like fate with his perfectly-sized car and open schedule. And it was a huge relief to get that settled!

The rest of the night was low-key. Back at the hotel, we got ourselves organized. We were leaving in the morning for an overnight trip, and thankfully, the hotel was letting us leave some bags there which meant we could travel lighter… but we did need to repack everything and pull out the stuff we wanted to take with us. We took a break to get some alpaca burgers for dinner and then headed back to the hotel to finish getting ready for the next day’s adventures with our new BFF, Amerigo the taxi man!