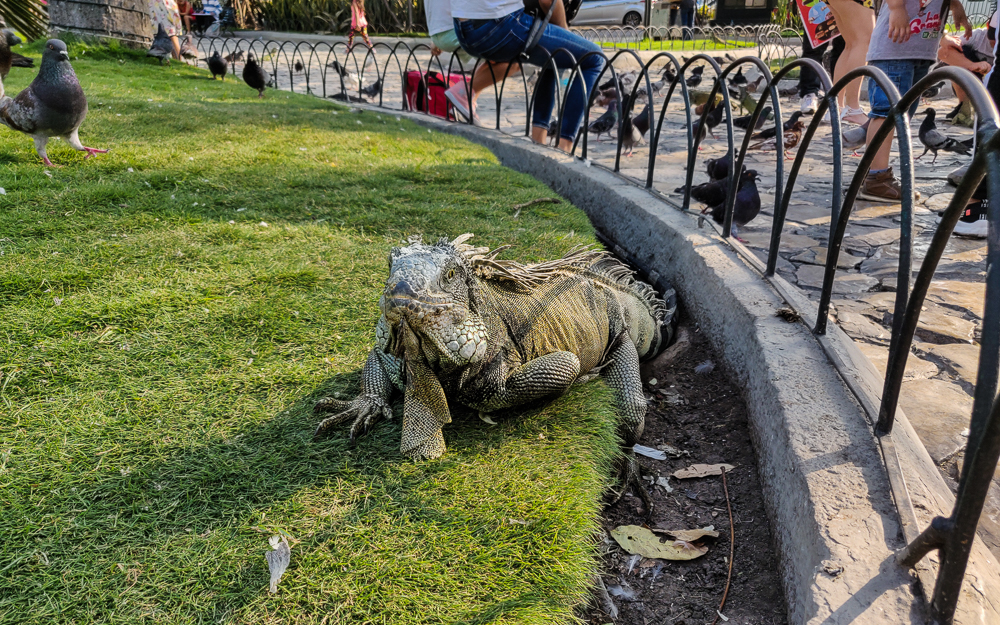 Travel day! Travel days are always kind of the worst, but the ACTUAL worst is when they start with a pre-6AM wake-up. People aren’t supposed to wake up that early! And you can never get to sleep early enough the night before to offset those lost morning hours because of last-minute packing. Our alarm went off at 4AM. DEAD. That’s how I felt when I opened my eyes. Mom and Dad had an 8AM flight (WHY), so we planned to leave the hotel at 4:45 to get to the airport three hours before. It always feels like overkill, but at the Lima airport, sometimes you really do need it. It turned out that the airport wasn’t busy, but there was a taxi mix-up that thankfully wasn’t disastrous thanks to our time cushion.

At the airport, I said a half-asleep goodbye to Mom and Dad, they headed off to the States. and I spent a few drowsy hours in the airport food court until I could check in for my flight to Ecuador! My final destination was the Galapagos Islands, an archipelago in the Pacific that’s known for its wildlife, but my trip there was a multi-day journey. The plan was to fly to Guayaquil, the largest city in Ecuador, explore the city for an afternoon, spend the night, meet up with my cousins and aunt and uncle the next morning, and then fly the rest of the way to island #1, San Cristobal!

Guayaquil doesn’t have the best of reputations. I planned my flights to have at least a few hours to wander around the city, and while I was looking for things to do and see, all sorts of articles with titles like “Why You Shouldn’t Visit Guayaquil” came up. Okay, not terribly encouraging. There were also plenty of articles with tips on how to not get robbed or scammed. After reading enough of them to feel like I had a handle on things but not so many that I was totally freaked out, I concluded that I’d be fine as long as I took official taxis to and from the airport (which you should always do anyway), left my valuables behind while walking around, stayed in the tourist parts of town during the day, and maintained a general awareness of my surroundings. Aka be smart. I wasn’t worried.

Anyway, like I said, Guayaquil (wai-ah-keel) is Ecuador’s largest city. It’s located on the banks of the Guayas River, about 40 miles (64km) upstream from the Gulf of Guayaquil/Pacific Ocean and is the primary port city of Ecuador. According to legend, the name comes from an indigenous chief, Guayas, and his wife, Quil, who lived back when the Spanish conquistadors arrived in the 1530s. They both fought valiantly but were captured. Guayas tricked the Spanish by promising to lead them to great riches if they were released, and instead, he used the opportunity to kill Quil and then himself, preferring death to imprisonment. When the city was first established, it was given the full name of “Muy Noble y Muy Leal Ciudad de Santiago de Guayaquil”, the Very Noble and Very Loyal City of Santiago of Guayaquil, named after Guayas and Quil as well as St. James (Santiago).

Throughout the colonial years, the city was attacked many times by pirates and privateers (which, to my understanding, are basically gentleman pirates… They did the same things as pirates but were commissioned by different governments to attack and plunder their enemies. So, French and English privateers would have attacked Spanish colonies, etc.), and you can still visit a fort at the top of Cerro Santa Ana, a hill in town, and see the cannons that were used to defend the city.

In 1820, Guayaquil declared independence from Spain and operated as an independent province until 1822 when it was forced to join the newly formed Colombia. In 1830, the southern part of Colombia split off to form Ecuador, taking Guayaquil with it. Today, it’s Ecuador’s largest and most important city economically. Most of the country’s international imports and exports pass through its port, and its rapid industrial development has attracted people from rural areas in search of work.

In recent years, city leadership has prioritized urban renewal and infrastructure projects, working to grow Guayaquil’s commercial districts, tourism to the city, and international business. There have been massive improvements to the roadways, a large pedestrian bridge project to promote tourism to Santay Island (an island on the Guayas River where over a hundred species of birds have been recorded!), updates to public transit, and various projects meant to create a safer and more welcoming downtown area. One such project, lauded as a great success in urban revitalization, is the Malecón 2000, a 1.6-mile-long (2.5km) river walk featuring monuments, river views, playgrounds, gardens, and more.

I landed in Guayaquil around 1PM, took an official taxi to my hostel, and enjoyed a minute of A/C before heading back out into the million-degree heat. I was in “blend” mode, so despite feeling like all of my skin was going to melt off, I wore pants and jammed my phone, room key, and a couple of dollars into the waistband to avoid having to carry a purse. I was on high alert for pickpockets, but everywhere I walked was in the tourist center, there are cops all over, and I didn’t feel unsafe for even a second.

The Malecón is really well-done. I started with a walk through the Malecón Gardens, and it was a bit jarring to see how different the flora is from Lima. It seems like it should be similar… two cities on the Pacific coast, not too far from one another. But Lima is a subtropical desert, and Guayaquil is a tropical savanna which means that for at least part of the year, there’s a lot of rain (the “wet” season in Lima is mostly just misty).

After all of the negative “don’t go there/it’s not worth it” articles I found, I was pleasantly surprised by how many things there are to do in the city. I actually regretted only having a few hours there because I had to contain my sightseeing to a small area, but I have a long list of things to see if I ever find myself there again.

I stuck to the center of town, and another major “must-see” is a plaza called Parque Seminario. It features a statue of Simón Bolívar, one of the main liberators of South America. He and José de San Martín (who, if you recall from our walk through Lima, is one of the liberators celebrated in Peru) had a famous meeting in Guayaquil in 1822 to discuss the future of independent South America… but it sounds like, while they had great respect for one another, they didn’t agree on much beyond liberation. I’m actually not quite sure what the meeting accomplished except for maybe a conclusion of “let’s agree to disagree”.

Anyway, Bolívar has the honor of watching over the famous iguanas of Parque Seminario. Yes, that’s right. Iguanas. They’re native to the area, so while it seems like a weird low-budget zoo, they weren’t brought in for the sake of amusement. That’s just where they live. My gosh, though. It is WEIRD to see a bunch of giant iguanas in the middle of the city. The biggest ones are up to 5’ (1.5m) long!

I took a video of one of them because I think they’re such funny creatures:

The Metropolitan Cathedral of Guayaquil is also on the square, and while I would have loved to go inside, there was a massive crowd out front… I think there was a wedding going on.

It was getting late when I left the park, so I grabbed some dinner and went back to my hostel to relax and prepare myself for the busy week and a half ahead! Next time, off to the Galapagos!!!

Argentina History: 1400s-1800s – follow Argentina through its colonial years and quest for independence

Oxbow Lake – if you enjoyed the funky trees of Guayaquil, you’ll love the unique trees of the Peruvian Amazon!

W Trek Day 3 – hop down to Chile for a hike through Torres del Paine, a national park filled with prehistoric-looking landscapes that seem perfect for our dinosaur-iguana friends