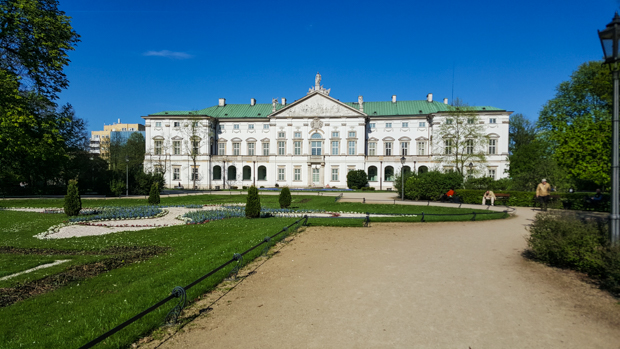 Last time, we left off in the heart of Warsaw Old Town, Old Town Market Square. Now, let’s go to the edge of Old Town and the old city walls.

Starting in the 14th century, the Old Town was surrounded by defensive walls. They used a double-wall system, with inner and outer walls that you can walk between, and gates to get into and out of the city. Some of the walls are still standing today, or rather, some of the walls were preserved/reconstructed after the destruction of WWII.

One of the major attractions of the city walls today is the Warsaw Barbican. It was designed as a fortified gateway into the city, but due to advances in weaponry, it was useless as soon as it was built. In the years that followed, it was mostly disassembled as people took the bricks to use elsewhere. During the post-war rebuilding efforts, it was reconstructed as a tourist attraction. So, if there’s one thing in Warsaw that really is like Disneyland, it’s the Barbican.

This was about where the tour I went on ended. Another fantastic thing about free tours is that sometimes, they give you a city map at the end! I think paper maps are the best way to plan city sightseeing because you can draw all over them, so when our guide pulled a stack out at the end of the tour, I was thrilled. Unfortunately, he didn’t have enough for everyone, but the Spanish tour guide had some extra Spanish maps… I figured that was better than nothing, right? Ehh, maybe. Over the next couple days, my bad translations sent me all over the city with completely wrong ideas of what I was going to see. Whoops. Oh well, it’s all part of the fun of exploring a new city!

I stayed in Warsaw for two more days after my exhausting arrival day and did a combination of museum visits and sightseeing around the city. I’m going to leave the museums for my next post, so for now, let’s go for a walk around “New Town”!

As I mentioned in my modern history post, the Polish people are extremely proud of their famous countrymen and will never miss an opportunity to remind you that they’re Polish. It doesn’t matter how long they lived in Poland, if they ever lived in Poland, if they’re only 0.5% Polish, etc. I think Polish blood is dominant, so even a drop means you’re 100% Polish. And obviously, all of those people love Poland the most, so no matter where they may have lived, their hearts were always in Poland.

For one person in particular, that statement is disturbingly true. Do you know where Frédéric Chopin, the famous pianist and composer, is buried? In Paris, where he lived for half of his life and most of his career. Do you know where Chopin’s heart is? Like his actual, literal heart? In Warsaw. Chopin was afraid of being buried alive, so he requested that his heart be removed after death and brought back to Poland. Poland didn’t exist at the time, so his sister had to smuggle it from France into Russia (at the time) in a jar of liquor. It now lives inside a column in Holy Cross Church in Warsaw. Yes, I’m serious. Fun fact: In 2014, it was taken out of the column and visually studied (without removing it from the jar) in an attempt to determine Chopin’s cause of death (they believe he died from pericarditis, a complication of tuberculosis).

Chopin may have lived abroad, but even then his heart was, figuratively, and now is, literally, in Poland.

There is also a series of 15 “Chopin benches” scattered across the city. Each is in a place connected to Chopin, and with the press of a button, each plays one of his compositions! Musical benches! I wonder how the Warszawians feel about those benches… maybe it’s in the Polish blood that you never tire of listening to Chopin.

The above Chopin bench is where Saxon Palace used to stand (now it’s just an empty plaza, Piłsudski Square), also the location of Poland’s Tomb of the Unknown Soldier. The tomb was constructed underneath the palace’s colonnade. After the WWII destruction of Warsaw, the palace was gone and only a small portion of the colonnade remained standing, including the part sheltering the tomb.

Piłsudski Square is full of monuments, actually. In 2010, a Polish government plane attempting to land in Smolensk, Russia crashed, killing all 96 people on board. The passengers were headed to an event commemorating the WWII Katyn massacre (the mass execution of thousands of Polish officers by Soviet forces). Among the victims were the Polish president, government officials, military officers, and members of the clergy. It was ruled an accident caused by bad weather, though as you might expect, there are plenty of conspiracy theories. To honor and remember the victims, a monument was placed in Piłsudski Square. It’s designed to look like airstairs, like what you climb to board a plane. My first thought was that it looks like a stairway to heaven.

Saxon Palace is, at the moment, nothing more than that little fragment of colonnade above the Tomb of the Unknown Soldier. There are plans to rebuild it, but those have been put on hold for financial reasons. There is, however, no shortage of other palaces in Warsaw! I walked around and looked at a few of them from the outside, but I would love to go back and spend more time exploring the interiors! I’ve heard people say that there’s not much to see/do in Warsaw… I don’t know what to say to those people because I could have spent months there and still not gotten to everything on my list!

Since I love both parks and palaces, I had to visit Łazienki Palace, also called the Palace on the Isle. It’s located in the largest park in the city, on a man-made island on a lake.

The other exciting thing about this palace is that it wasn’t destroyed in WWII! Much of the destruction of historical monuments was done by drilling holes in their walls and putting dynamite in the holes. At Łazienki Palace, they drilled the holes but never got around to the actual blowing up… which means we all get to enjoy the 1680s original! Well, original plus some later renovations. It was designed to be a bathhouse, so adjustments were made to convert it into a palace. Yes, a bathhouse. Please, take another look…

Like I said before, I didn’t have NEARLY enough time to fully explore Warsaw. I was there for three days, and I barely even made it across the river! Old Town and New Town are on the west side of the city, the side that was occupied by the Nazis. There’s still a whole other part of the city on the east side of the Vistula River, the “artsy” Praga district. Since it was occupied by the Russians in WWII, it was the least damaged part of the city… so while the west side is a kind of “new” old, the east is an “actually old” old.

Even though I didn’t have the time required to do the east side justice, I felt like I had to at least cross the river before I left. I also wanted to check out the Warsaw beaches! Yeah, you read that right, there are beaches along the river! Like actual beaches with actual sand… that I actually didn’t take a picture of so you’ll just have to believe me (whoops!).

There’s also a trail that makes you feel like you’re definitely NOT in the middle of a city and piers where you can walk out along the water. So. Cool.

If the nature-y feel of the east side of the river isn’t for you, there’s a much more refined river walk on the west side, but I liked feeling like an explorer.

This is the end of our little city stroll, but I do have a more to say about Warsaw! Next time, we’re going to take a peek into a few museums…